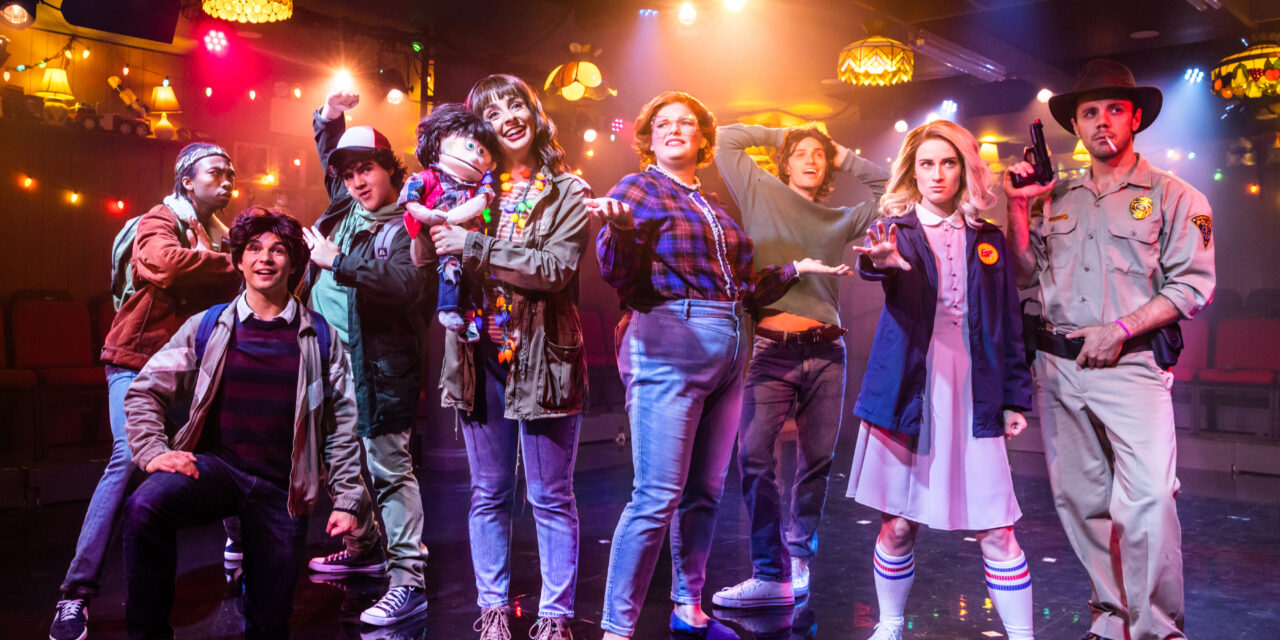 If you are one of the millions of fans who have binged the Netflix hit Stranger Things, then get yourself to Playhouse 46  at St. Luke’s to see Stranger Sings! The Parody Musical. The intimate theater-in the-round has been transformed into the Byers’ home circa 1983 and you’ve been transported to Hawkins, Indiana, hanging out with the gang while they look for Will and uncover the mysterious happenings in the town.

Get there a few minutes early so you can wander around the theater and take in all of the 1980s decor. Four audience members are chosen to watch the production from the comfort of bean bag chairs right in the center of the action. I got to see the show from one, and it made the experience even more fun. A prerequisite, in my opinion, to truly enjoy the show and get all of the jokes, is to be familiar with the series. The first half of the show focuses mostly on the first episode of season one, so that makes it easy for people to enjoy who watched it in the beginning but then trailed off. The second half has bits from later on, mostly season three, so if you have not yet seen season four, no worries. You will definitely be able to follow the action.

In addition to poking fun at the storyline and characters in Stranger Things, author and lyricist Jonathan Hogue spoofs a wide variety of other popular culture themes, referencing television, movies, and Broadway shows. If you are paying attention, you will pick up on nods to movies Wynona Ryder has starred in (Ryder plays Mrs. Byers in the series), Sesame Street and The Muppets (the character of Will is portrayed as a puppet in the show), and recognizable tunes and lines from a variety of Broadway shows and movies.

Caroline Huerta did double-duty as both the puppeteer for Will, and playing the character of Joyce Byers. Mrs. Byers is a wildly-frenetic mom, and Huerta captured the insanity of the character perfectly, playing her as an over-the-top crazed mom. The references to Wynona Ryder made the characterization even funnier. Harley Seger also played two roles, as both Nancy and Eleven. Her Nancy was spot-on; she was a dead ringer for the character and not only looked like her, but had her facial expressions down-pat. Although not credited as such, Dance Captain Jamir Brown played a few additional parts in addition to his main role as Lucas. He makes a brief, but hysterical appearance as Lucas’ younger sister Erica, and does a magnificent job with movement portraying the demogorgon.

Garrett Poladian played both Steve and Jonathan with hilarity, capturing the essence of both of Nancy’s love interests. He also danced his way onto the set playing the kooky mad scientist “Papa”. Shawn Smith sauntered in as Hopper, with his slow way of talking, his cigarette, and his one-liners. The lovesick character of Mike was played by Jeffrey Laughrun, with Jeremiah Garcia capturing Dustin perfectly with the curly hair, the lisp, and the personality of the character. When he lisps, “Nothing bad ever happens in small towns,” at the beginning of the show, it is received with laughter as the audience knows what is about to ensue.

SLee stole the scene several times as the character Barb, a throwaway character in the series who is all but forgotten. Here, Barb gets to shine in a larger role, and SLee plays her to perfection belting out her songs to an appreciative audience who gave her the loudest applause. The cast members who are primarily playing one lead make appearances throughout the show in other bit parts. Understudies for the show include Dashiell Gregory, Hannah Clarke Levine, and Jean Christian Barry. Michael Kaish was responsible for the music supervision, arrangements, and orchestrations. Ashley Marinelli did the choreography, and Nick Flatto is the Director.

If you are looking for a big-time production, get tickets for a Broadway show. If you want to have fun with some talented up-and-coming actors in a cool space, and laugh at a campy musical poking fun at one of your favorite binge-worthy shows, Stranger Sings is for you. This limited run will be at Playhouse 46 at St. Luke’s through January 1st.