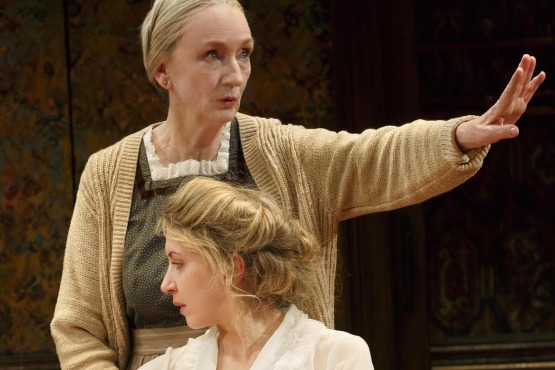 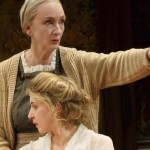 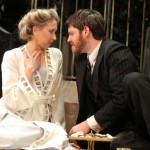 Vienna in 1920.  It is the post-war period, the government is Communist, society is grim and sometimes a gal’s gotta do what a gal’s gotta do.  Ever since Heléna Altman’s husband was reported killed by a grenade in World War I, things have been tough.  To survive, she has had to turn to the dark side, struggling to keep her secret in the shadows.  Then, unfortunately, Heléna comes face to face with someone who threatens to unravel her whole life.

In Manhattan Theatre Club’s Tales from Red Vienna by David Grimm (Measure for Pleasure), Nina Arianda portrays the formerly proper, coddled widow, now robbed of life’s luxuries.  Since  her husband’s death, Heléna has had to make-do in an unpretentious flat, depressed and ashamed of selling her body for money.  Remaining with her is longtime devoted housekeeper, Edda Schmidt (Kathleen Chalfant), a no-nonsence, sharp-tongued tippler. 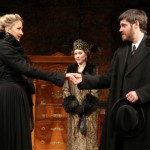 Unexpectedly, Mutzi von Fessendorf (Tina Benko), a well-heeled flamboyant frenemy, shows up, convincing Heléna to accept a blind date with a socialist Hungarian journalist, Béla Hoyos (Michael Esper).  When Heléna meets Hoyos, both realize he was one of Heléna’s recent clients.  Not the most comfortable situation, but they adjust quickly enough and begin a passionate affair, usually meeting in the cemetery near Stefan’s memorial site.  It’s unusual but it works.

Directed by Kate Whoriskey (Ruined), twists unfold with unpredictability and outsized passions.  The sex is spicy without nudity, the lovers have at it with lust and laughs, and soon Heléna emerges from her shell, feeling no guilt even as her lifelong pal, Mutzi, married to a diploment, is also lusting after Hoyos.  In fact, the vengeful Mutzi arranges for the sudden appearance of another stranger, Karl Hupka (Lucas Hall),  again threatening Heléna’s new life.  Dealing with this new dilemma is the crux of the final act, returning to the dark mood as Heléna tries to adjust to the upheaval.

Nina Arianda (Venus in Fur) has proven she can tackle the most twisted roles.  Her portrayal of the proper, pondering Heléna is persuasive yet her sexual action shows more action than charisma.  Esper’s Hoyos is persistent, making it clear he is a red-blooded fellow.  Heléna is a reactor, first to the war and her husband’s death, then to the outgoing, humorous Hoyos.  Even her major decision at the end comes because of earlier actions by others.

Outstanding is Chalfant’s Edda with well-timed delivery and straight-talking wit and loving support for Heléna.  Benko, enveloped in luxurious fur-trimmed collars and cuffs, relishes in Mutzi’s extravagant spirit, living up to Hoyos’ comment that Mutzi is known for her  “irresistible charisma of true lunacy.”  Lucas Hall is staid and selfish as Karl Hupka with the disgraceful past and hateful judgment.  Michael Goldsmith plays a likeable teenage Jewish grocery boy with a grown-up crush on Heléna.

The production values look authentic.  John Lee Beatty designed a shabby Mitteleuropa-style living room for Heléna, showcased with one handsome bureau, sadly one of the few pieces of good furniture left.  The ominous sound of a grandfather clock’s tick-tock and Peter Kaczorowski’s provocative lighting add airs of mystery.  Debra Waxman-Pilla provides 1920’s skirts above the ankles, and dresses Heléna in widows’ weeds until she meets Hoyos and then switches to gray, and later, white.  Interspersed through the play are Rob Milburn and Michael Bodeen’s refrains of Strauss waltzes.

Tales from Red Vienna has the flavors of an Ibsen play or, if you prefer, a ’40’s “women’s movie,” something like Tomorrow is Forever.  Like earlier works, the play is given three acts with two intermissions.  While Grimm’s characterizations are not fully explored and the plot wavers in focus from brooding to comedic, Tales from Red Vienna provides an engrossing few hours about a nostalgic era balancing post-war uncertainty and old-world tradition. 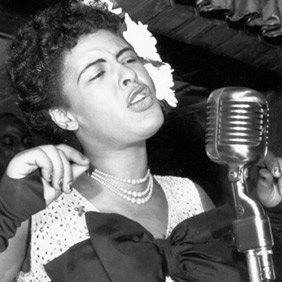