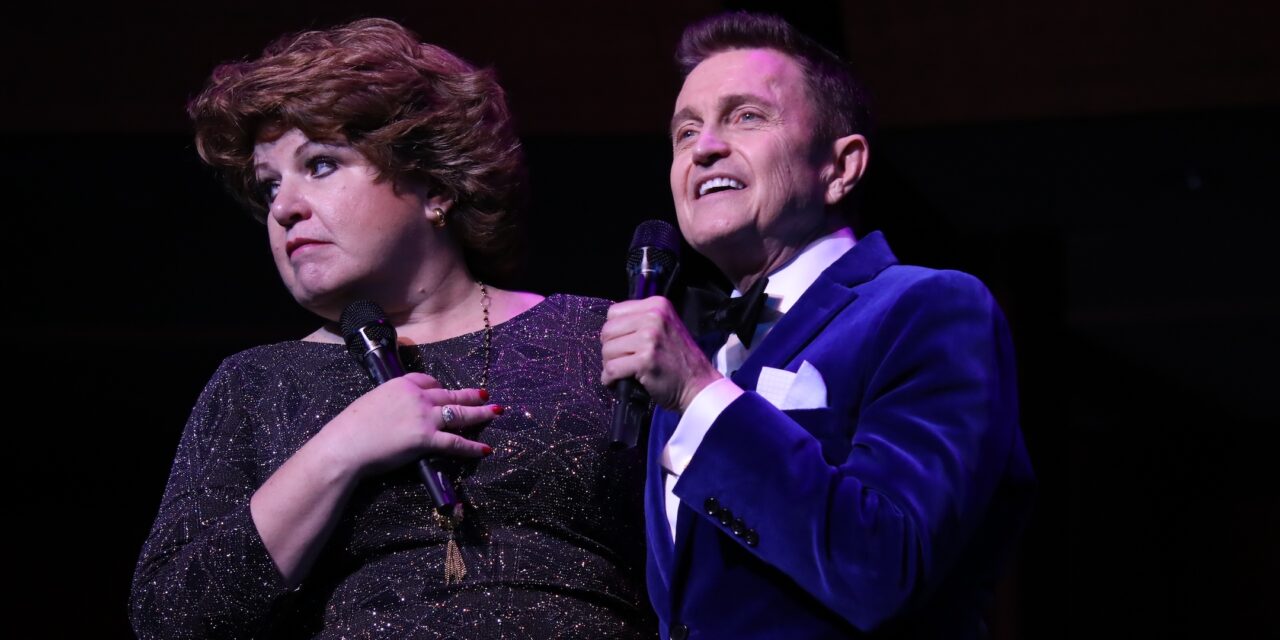 Opening The 32nd New York Cabaret Convention of the Mabel Mercer Foundation (MMF), the incomparable vocalist, Sandy Stewart, reminded the sold-out audience that it was exactly two years ago that she stood on the Rose Hall stage for the last live Convention. It was a moment poignant and utterly joyful at the same time—for all were primed to hear the music come literally alive again. For “The Melody Lingers On: A Gala Tribute to the Songs of Irving Berlin,” she sang, with son and renowned pianist Bill Charlap at the piano, an evocative, definitive version of “Always.”

Therein followed 21 performers who did Mr. Berlin proud, shepherded by host Jeff Harnar. He’s no stranger to that duty, often hosting at past Conventions in the days before Covid-19 caused the 2020 event to be entirely online. Missing in body, but certainly not in spirit, MMF Artistic Director and guiding force, KT Sullivan, was not able to attend, due to pressing family matters. She was, however, represented by Sullivan family matriarch, Elizabeth (in the audience) and later, on stage, by sister, Stacy Sullivan, who sang “They Say It’s Wonderful” with frequent performing partner, crooner par excellence, Todd Murray.

There were, of course, the awards, each declaration of honor being written, as always, by MMF scribe, John Fricke. The Julie Wilson Award went to actor-singer-dancer David LaMarr, whose dazzling red heels could have stolen the show were it not for his enormous energy, personality and impressive delivery of “Blue Skies/Sittin’ in the Sun,” with Darnell White at the piano. The Mabel Mercer Award was presented to veteran actor and cabaret star, Karen Akers, accompanied by Alex Rybeck. In honor of her mother, who recently passed away and for whom this Berlin tune resonated in particular, Akers sang, in English and Russian, a beautiful “Russian Lullaby.” Previously, the Donald F. Smith Award had been bestowed on cabaret couple Eric Comstock and Barbara Fasano in a streaming edition of the Convention (see below).

Quite a few singing pianists populated the evening, all very delightful in their own individual ways and all aces on the eighty-eights. Eric Yves Garcia, the suave sophisticate offered “It’s a Lovely Day,” while that other gentleman who defines the words suave and sophisticated, Steve Ross, delivered a divine medley of “Let Me Sing and I’m Happy/All By Myself.” Billy Stritch crooned a superb arrangement of “Let’s Face the Music and Dance,” as a samba-based ballad. And the one-and-only Mark Nadler, whose exuberance and energy may someday launch him off the piano bench into outer space, presented an unpublished Berlin song, beautifully explaining the back story of how he and KT Sullivan obtained it from one of Berlin’s daughters. With a quiet and serious “Me and My Piano” he followed with an exhilarating “I Love a Piano.”

Highlights of the evening were many. Sidney Myer, often introduced as “the most-loved man in show business,” with Tracy Stark on piano, got huge applause just for being. His patter and number “I’m a Bad, Bad Man,” brought the house down. With his irrepressible parlando style, and wit and humor, the one-of-a-kind Myer was a beacon of joy—on steroids. Also emitting joy as he always does, the brightly talented Nicolas King filled the hall with happiness on a jazzy “Shaken’ the Blues Away.” Amra-Fay Wright, with Mark Hummel on the keys, sang a brilliant “There’s No Business Like Show Business.” It’s one of those numbers that’s often delivered with belt, like an anthem. Wright turned it into a story song—a love song to the stage—opening up on the second chorus with a vocal that was an ode to joy.

The many others who brought their unique and wonderful talents to this 32nd annual MMF Convention were Andrea Marcovicci, Karen Oberlin, Natalie Douglas, Klea Blackhurst, Aishe de Haas, Christine Andreas, Karen Mason, and the singing sisters, The Moipei Triplets. The core accompaniment for these talented participants of “The Melody Lingers On” were all masters of their instruments: Jon Weber on piano, Steve Doyle on bass and Ray Marchica on drums.

Note: nights one and two of this year’s MMF Cabaret Convention streamed live. Both were hosted by Natalie Douglas. The first, “Love Is Sweeping the Country,” featured 23 performers in their various locations across the nation. The second night, “The Future of Cabaret,” presented the winner (Mark Aguirre) and three finalists from the fourth annual Elow High School talent competition, which was again virtual this year. Two past competitors, Anaïs Reno and Hannah Jane (Peterson), also performed. Both shows can still be viewed at www.mabelmercer.org