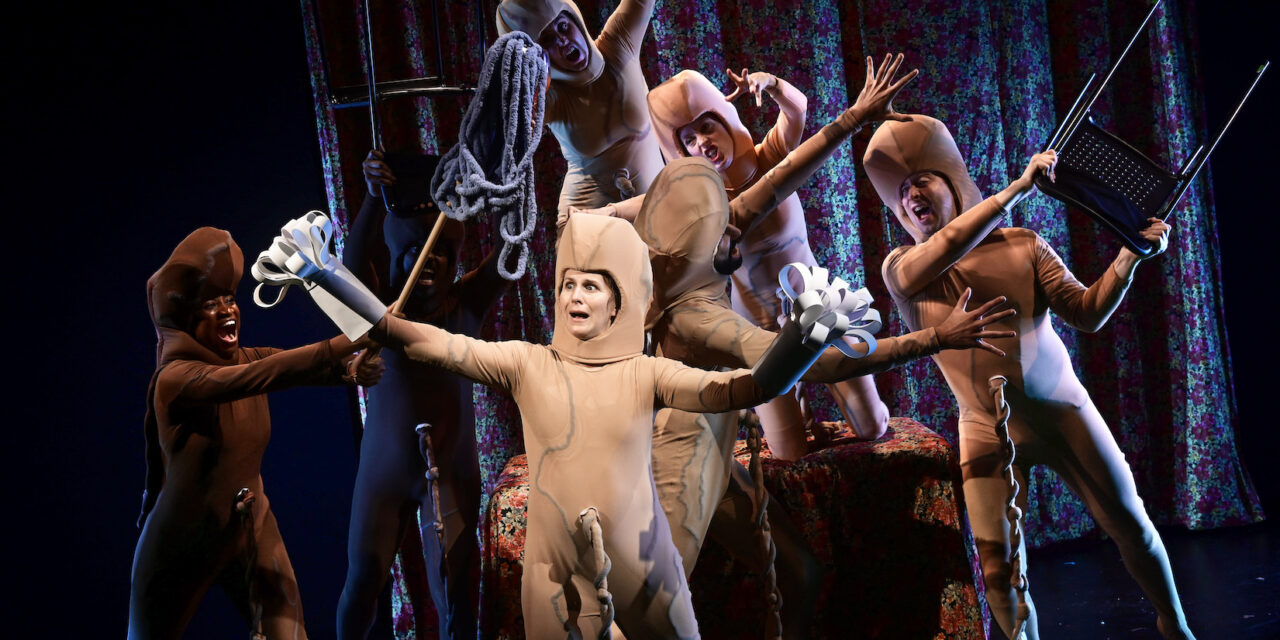 It’s hard to think of anything more discomfiting than sitting through a show with an audience determined to laugh or giggle at every line, facial expression, or pratfall with the slightest pretension to humor when you yourself find perhaps two percent of what they’re laughing at worth even a polite chuckle. It’s even worse when the material being performed is attempting to somehow come to grips with a provocative socio-political problem, even if through the filter of musical satire, but is so busy making fun of the issue that its own point of view remains frustratingly opaque.

The show in question, a devised work presented by Philadelphia’s Lightning Rod Special at Off Broadway’s WP Theatre, is The Appointment, a bizarre, 90-minute, musical commentary about abortion enacted for long stretches by its seven-member cast dressed in head-to-toe skin tight costumes, designed—with attached umbilical cords—by Rebecca Hanach to suggest they’re fetuses. (They bear a close resemblance to the sperm cells in Woody Allen’s Everything You Ever Wanted to Know about Sex.) The same actors also play the fetus’s mothers, patients at a cash-only abortion clinic, location undisclosed, and the doctors and assistants responsible for the procedure.

I missed the show’s original production back in 2019, when it played to rather warm reviews, including from Ben Brantley in the Times, at the small theater next to the New York Theatre Workshop. Its writers are Alice Yorke (“lead artist”), Eva Steinmetz, Scott R. Sheppard, and Alex Bechtel; its forgettable music, lyrics, and arrangements are by Mr. Bechtel; and Ms. Steinmetz is the director. A three-piece band, with Mr. Bechtel on the keys, accompanies the action upstage on a nondescript set by Oona Curley, making ample use of traveler curtains to separate scenes.

There are a few pseudo-serious scenes, in which we watch several women in a waiting room both before and after their procedures, and also observe one woman’s (Ms. Yorke) pre-op encounter with her providers when, among other things, she’s legally required to view and acknowledge an image of her fetus. Later, we watch the abortion itself, carried out with clinically uneventful coolness, the mother a passive participant showing barely a flicker of emotion.

But there’s an odd disconnect between these moments and the more raucous, farcically absurdist business—including the frequent appearance of a hangar-like hook that yanks fetuses offstage, as if they’ve outlived their vaudeville usefulness—which mostly occupies the stage time. Additional amusement, if it’s your thing, is provided with an audience participation sequence about “daddies,” in which several men are singled out for questions by the fetuses. The funniest moment the night I went came when, as my plus-one recalled it, a guy was asked if he would “fuck” one of them and he answered, “Yes—if I swung that way.”

One imagines that the flare-up created last year by the Supreme Court’s decision to abandon Roe v. Wade inspired the revival. The program note, after articulating the “rage” at various targets (misogyny, paternalism, hypocritical leaders, etc.) that gave birth to The Appointment five years ago, declares how “the overturning of Roe v. Wade” made “the need for people to confront their participation in the systems that got us here . . . more pressing than ever.” However, the show—mainly a series of often leadenly satirical songs, dances, and sketches performed by the fetuses—never engages in polemics. Whatever you take away regarding the creators’ position on abortion is up to you to decide for yourself, just as you’ll have to figure out the purpose of scenes like the one in which a Thanksgiving dinner goes awry when a family of fetuses is shocked when their fetus turkey comes back to life, even making prophetic statements.

Debates or no, you might imagine that a show about abortion conceived in “rage” would lean heavily on the pro-choice side. You’d be wrong, though, as The Appointment seeks a more balanced position, making it unclear where its creators stand. Overall, though, with so much emphasis on fetuses, cute and cuddly yet feisty and even argumentative—almost as if they were the full-blown humans they would one day live to be if no one intervened—it’s hard to escape the feeling that maybe aborting them isn’t such a good idea after all.

The Appointment. Through February 4 at the WP Theater (2162 Broadway, at West 76th Street). www.wptheater.org