New York’s avant-garde Faux-Real Theatre specializes in staging the classics of Greek theatre with an immersive abandon that closely approximates how these plays were first experienced thousands of years ago.  They are staging Euripides’ The Bacchae at La MaMa with music, dancing, and masks,   Before the play begins, a barefoot and bearded Euripides portrayed by Mark Greenfield, feeds us wine and apple juice.  Young women in loosely fitting robes also feed us grapes.  As the lights go down, Euripides tells of the troubles he has had with this play but invites us to sit back and enjoy it.

I have seen several productions of The Bacchae in the past.  One of the most successful was the one at the Performance Garage titled Dionysus 69 which was filmed by Brian DePalma.  Usually it is performed with exaggerated phalluses.  One virtue of the Faux-Real Theatre production, directed by Greenfield, with masks and a large bull puppet by Lynda White, costumes by Irina Gets, and musical direction by Tony Naumovski (mostly drums and percussion) is the cast is very youthful and multi-racial.  As Dionysus, the son of Zeus, young Andrew Bryce puts a fresh spin on the god, and even when masked or in a golden wig or in disguise, his energy never fails.  As his rival, Pentheus, the King of Thebes, PJ Adzima is also very youthful and their rivalry is full of trickery and entrapments.  Cadmus, the father of Pentheus, is played by JY Murphy and he and his wife, Agave, played by Fiona Robberson, are the villains of the piece,  By the end of the play they suffer horrible fates.  At one point, Agave is bound to a plank and tortured by Dionysus and his female followers in frightful masks.  At the end, Cadmus is stripped and turned into a rattlesnake (with appropriate mask and rattlesnake sounds,) and Agave is doomed to crawl after him.  The blind messenger, Tiresias, is played superbly by Tony Naumovski, who uses his staff as a weapon as well as a crutch.

The cast of 19 includes female followers of Dionysus who revel in wine drinking and sexual action and several muscular male servants of Pentheus who often are behind him making ornate gestures during his speeches.  The symbolic big bull puppet makes several appearances..  The set includes three doors at the rear and many of the entrances and exits are through the side aisles.  At the end of the play, Alexandra Zelman, as the Leader of the Chorus, speaks strongly to the audience about the relevance of the play to today‘s power struggles and politics.

If you’ve never seen a production of The Bacchae, you should rush down to La MaMa to see this one.  It runs about one hour and a half but there is constant action and the plot of the classic is very clear in this production.

Faux-Real Theatre’s The Bacchae performs at La MaMa, 74A East 4th Street through March 20 on Thursdays, Fridays, and Saturdays at 7:30 PM, Sundays at 2 PM.  For tickets and information call 646-430-5374 or visit www.lamama.org.  For more information visit www.fauxreal.org 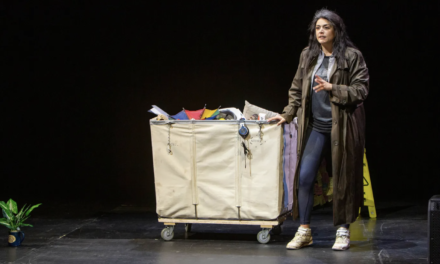