The Case for American Exceptionalism by a Lady Muz 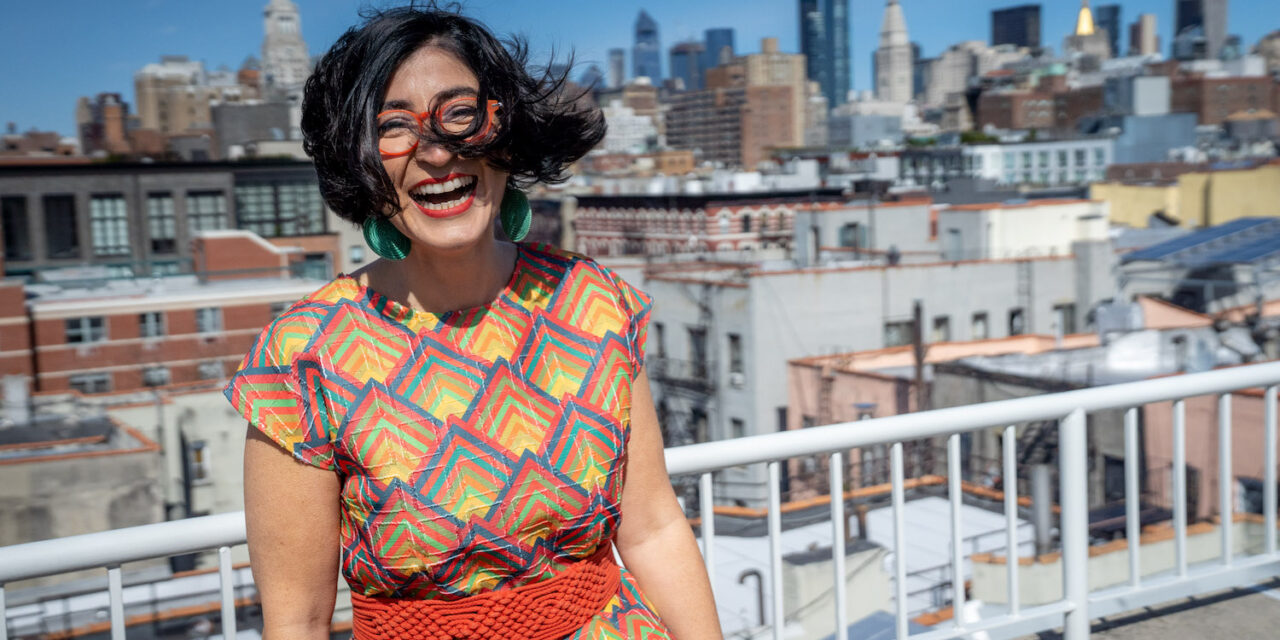 How many of you have parents who are immigrants? It is a question raised by Negin Farsad to a packed house at Joe’s Pub on a Friday night to bear witness to The Case for American Exceptionalism by a Lady Muz. Farsad’s show is part of the Under the Radar Festival currently at the Public Theater.

When a sea of hands go up from those with immigrant parents, Farsad, a favored Iranian-American Muslim comedian, quips about its being Manhattan. The number of raised hands is not surprising, she says. Whereas in Laramie, Wyoming, no hands go up and just a tumbleweed rolls by, as audience members stare at her with raised eyebrows as if to ask, “What a question! Immigrant parents?”

Negin Farsad’s humor is ironic, sardonic, clever, gentle, self-deprecatory and non-political. She mines a wealth of ironies about her Iranian-born mom, her former single life, her marriage to a Black actor, her pregnancy (and her 24-hour delivery), raising her daughter during the pandemic, her visit to Iran for her cousin’s marriage; and many more wonderful and homely topics, whose jokes are punctuated by elegant and quirky illustrations delivered by PowerPoint. Guffaws, chortles and downright belly laughs follow variously when the punchline hits home. Farsad has honed her craft, having traveled from coast to coast spreading her cheer, vibrance and equanimity to each state in the country.

The comedian creates her own stand-up and has that typical intuitive humorist’s sense to know which riffs to follow with additional riffs, which jokes land better than others, and how to engage both stalwart fans and newcomers with her non-divisive topics, all in the good clear fun of up girding American ideals, human rights, and liberties. The latter she affirmed by drawing comparisons to the present state of the women’s protests in Iran for free speech and the freedom to choose whether to wear a headscarf or not.

At the very end of the show, acknowledging she could never do stand-up in Tehran, Iran, as she does throughout the United States, she tears up. By way of appreciative explanation, she mentions she has a lot of family back in her parents’ homeland. Thus, she has much to be hopeful for and the great levity of the evening is all the more highlighted by the sacrifices it took for her to exercise rights for men and women that may never be won in Iran in the next decades.

In addition to excavating the humor in her personal life, Negin Farsad covers some examples of bigotry she’s experienced in the media and from the internet. One example she illuminated was in response to her appearance on MSNBC during a panel discussion.

After her appearance, she looked at the program’s social media posts. One tweeter (via Twitter) referred to her as a Jewish nerd and referenced her as McJewface. In her discussion with the audience, she quipped that for an American Muslim this was an upgrade. She suggested that the tweeter was actually bigoted against the wrong ethnic group (Irish or Scottish) and might have referred to her as “Bagelface.” Then she advised the audience about internet etiquette, “When they go low, we go emoji, followed by a smiley emoji (via PowerPoint). As a follow-up she closed with, “Live a better Jewish life, my people. Shabbat, Shalom.”

Of course the irony and twists on discrimination taking into consideration the relationship between Muslims and Jews in the Middle East are priceless. Clearly, the tweeter didn’t know the difference. And that is the beauty of America and the idea of our shared humanity. One always has more to learn from each other, especially when the culture and population are so diverse as to include a population from every continent around the globe.

This riff of jokes about the tweeter’s mistaken assumptions toward her, strengthened her theme of the evening. She uplifted her appreciation that in the United States all communities are lawfully enjoined to live peacefully with each other. Freedom of speech to agree to disagree and sharply answer verbally is an important right not granted in her parents’ Iran. It is all the more to be venerated here.

Thus, in her “standup-comedy-meets-TED Talk-meets ethnic-lady who defines patriotism,” tweets about cultural stereotypes and deconstruction of Dave Matthews fans, hers is an important voice. In her appreciation of what our democracy offers in comparison to the rights Iran does not offer, she uplifts the equanimity of the American experiment and its marvelousness in fashioning a nation of diverse races, religions and ethnic groups who live together peacefully.

Negin Farsad is a most refreshing humorous voice in a time when we might forget the importance of our constitution and nation’s freedoms and rights.

The Case for American Exceptionalism by a Lady Muz played various dates in January 2023 at Joe’s Pub as part of the Under the Radar Festival at The Public Theater (425 Lafayette at Astor Place). www.neginfarsad.com