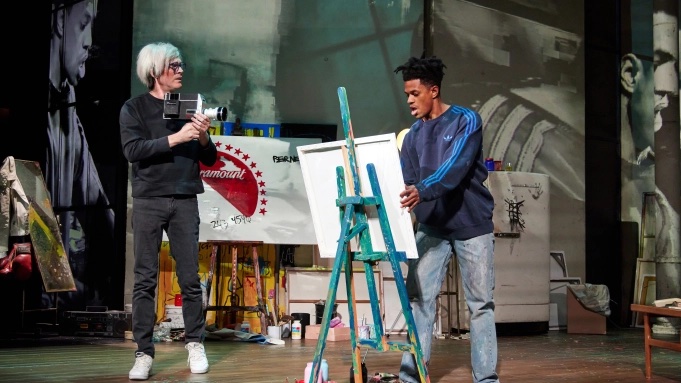 If you braved the crowds at MOMA (The Museum of Modern Art) this holiday, as I did, looking for the vibrant canvases of the Neo-Expressionist painter Jean-Michel Basquiat, you’d have been frustrated to find that none are currently on view.  Many were on display at the Jean-Michel Basquiat: King Pleasure exhibit that ran at the Starett-Lehigh Building on West 26th in New York City very recently. Missed that?

No need for disappointment – proceed directly to the Friedman Theatre on West 47th Street.  There you’ll meet the artist himself – as channeled by a charismatic Jeremy Pope.  A double treat awaits you – he’s working in a unique and historic collaboration with Andy Warhol, the pop artist who changed the American cultural landscape, played by a touching Paul Bettany. They appear together in The Collaboration, Anthony McCarten’s engaging new drama at the Manhattan Theatre Club.

The Collaboration follows a series of recent bio-dramas likeJohn Logan’s Red (about Mark Rothco) and Steven Sondheim’s Sunday in the Park With George (about Georges Seurat), focusing on the lives of great artists.  McCarten’s new play (previously at the Young Vic in London, directed by Kwame Kwei-Armah) offers the added opportunity of viewing not one but two groundbreaking, trend-shaping artists in action and interaction.

McCarten chooses to focus on a period in the 1980s when these two began to work together.  Basquiat was on a meteoric rise in the art world with his sensational canvases, while Warhol’s creativity was waning.  So, Warhol’s art dealer (played by Erik Jensen) encouraged the collaboration to reinvigorate his client’s energy.   During the mid-decade, the two artists would collaborate on numerous paintings, culminating in an exhibit of sixteen works in 1985.  Their process was unique – Warhol would begin with a Pop Art symbol, upon which Basquiat would layer another symbol, image or word in his Neo-Expressionist style.  They would then take turns adding layers to each work spontaneously, reacting in the moment.  In the process, the contrast between their creative styles – Warhol’s pop vs Basquiat’s street and graffiti – served to enrich the work.  What could have been a competition became a true artistic collaboration.

In the first act, the idea of the collaboration is introduced.  The artists meet and they begin to establish a working relationship, albeit awkwardly.  Basquiat is like a tornado, sweeping into the space that will become their shared studio and jolting Warhol out of his rut.  “I’m a real artist, Andy.  Who are you?”  Basquiat declares with unapologetic confidence.  “At least I haven’t sold my soul,” Basquiat adds, referring to Warhol’s commercial sense.  By act two (offering the payoff and pleasure of the play), they’ve become true friends, sharing a true respect and affection.  Basquiat revives Warhol’s creativity and desire to paint by provoking him: “You’re afraid of life – you’re the king of repetition!”  Warhol in return discourages Basquiat’s use of heroin (which ultimately would kill him three years later, at the age of 27).

These characters are so fascinating that one almost wishes the playwright had dug deeper into their complexities, as well as their respective pasts (Basquiat’s Haitian/Puerto Rican origins are mentioned fleetingly.)  I wanted to learn more about his meteoric rise, as well as the circumstances surrounding Warhol’s “painter’s bloc.”  More information would also be illuminating as to the 1980s art world (Mapplethorpe and Lichtenstein are briefly mentioned).

Still, the economy and focus of the script has provided the principal actors more than enough to shine in their roles.  Bettany endows Warhol with a surprising vulnerability – once an iconic figure who had always been larger-than-life.  At times, his self-doubt is painful.  As for Pope, you can’t take your eyes off his Basquiat– a dynamo who literally leaps around the stage, exploding with creativity.  In addition, two supporting roles contribute to our understanding of their lives: Krysta Rodriguez gives a spirited performance as Basquiat’s pregnant lover; Erik Jensen plays Warhol’s sympathetic and supportive art dealer, Bruno Bischofberger.

Ultimately, thanks to Kwame Kwei-Armah’s dynamic direction, the two hours traffic on stage (as Shakespeare called it) is bursting with life and energy.  Anna Fleischle’s colorful set is a backdrop for some fabulous projections (Duncan McLean) of the artists’ paintings and actual film footage of their collaboration.  Indeed, the entire production pulsates with color, vitality, and feeling.

“The next time you die, Andy, I’m going to bring you back to life!” Basquiat declares.  Thanks to Kwei Armah’s dynamic production and the splendid performances of Bettany and Pope, this prophecy has become true.