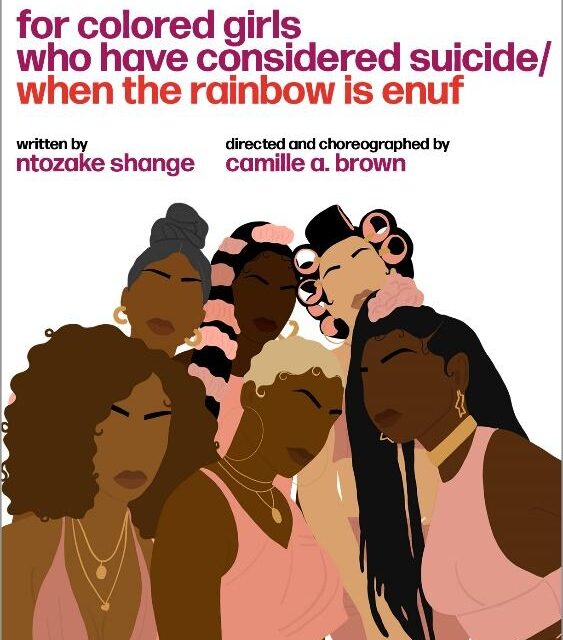 The fully reimagined production, directed and choreographed by Tony Award nominee Camille A. Brown (Once On This Island, Choir Boy, Fire Shut Up in My Bones – Metropolitan Opera Fall 2021), begins performances at Broadway’s Booth Theatre (222 West 45th Street), home to the original 1976 production, on Friday, March 4, 2022, with the opening night set for Thursday, March 24th, 2022. Casting will be announced at a later date.

Single tickets for the first Broadway revival of Ntozake Shange’s groundbreaking for colored girls who have considered suicide/when the rainbow is enuf will go on sale exclusively for American Express® Card Members beginning today, November 15, at 10a.m. EST through Monday, November 29, at 9:59a.m. EST. American Express® Card Members can purchase tickets before the general public by visiting www.telecharge.com. Presale tickets available exclusively to Audience Rewards® members from Monday, November 29, 2021, at 10a.m. EST – Monday, December 6, 2021, at 9:59a.m. EST. It’s free and fast to join at www.AudienceRewards.com. Tickets on sale to the general public beginning Thursday, December 9, at 10a.m. EST and will be available at www.telecharge.com.

Slave Play (written by Jeremy O. Harris) returns and will reopen at the August Wilson Theatre on November 23 for 69 performances only www.slaveplaybroadway.com

Jane Krakowski has stepped down from the role of Lily St. Regis in NBC’s upcoming Annie Live! after being diagnosed with a breakthrough case of Covid, the network said Friday. Smash star Megan Hilty will step into the role.

Andrea McArdle (Broadway’s original Annie) joins the cast to take on the role of Eleanor Roosevelt in the live musical. It will air on NBC on December 2.

GHOSTLIGHT RECORDS has announced that Ride the Cyclone: World Premiere Cast Recording – based on the critically acclaimed musical that has sold out hit productions across the US and Canada – will be available on CD online and in stores on Friday, December 3 and is now available for pre-order. The album was released in digital and streaming formats earlier this year. The show features book, music and lyrics by Jacob Richmond and Brooke Maxwell. The album is produced by Brooke Maxwell, who also serves as music director and conductor, and provides arrangements and orchestrations. Kevin McCollum (Six, Mrs. Doubtfire, Rent, Avenue Q, In the Heights, [title of show], The Drowsy Chaperone, Something Rotten!)and Morris Berchard (The Color Purple, Hand to God, Something Rotten!, Ragtime)serve as executive producers. Ride the Cyclone will be coming to theatres around the country. Sign up for news and updates at RideTheCycloneMusical.com.To stream or download the album, or pre-order the CD, please visit ghostlightrecords.lnk.to/ridethecyclonePR