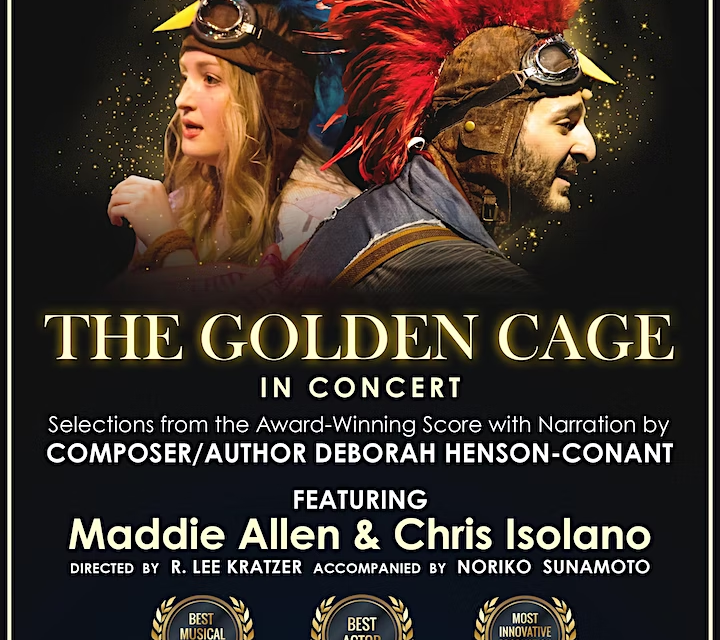 “The Golden Cage” is an award-winning new mythical musical about Boris – half-human / half-bird – who’s spent his life on a quest to find the ultimate symbol of security: the legendary Golden Cage. Finally he finds it – and it’s glorious! Except for one little thing: Alphea, a grumpy, melodramatic Diva, is trapped inside, and swears the cage is made of cement and iron.

This intimate new 2-character show, about the traps we create in our minds, was a multi-award-winner in the 2022 Off-Broadway “Create Theater New Works Festival” garnering Best Score, Best Actor and Most Innovative Production

The Public Theater announced the full line-up for the 18th annual UNDER THE RADAR FESTIVAL, running January 4-22, 2023. A highlight of the winter season, the innovative festival returns to in-person performances at The Public Theater’s flagship building at Astor Place and five partner venues: Brooklyn Academy of Music, Chelsea Factory, La MaMa, the New York Public Library, and NYU Skirball Center. Curated by UTR Festival Director Mark Russell, the festival will feature 36 artists and companies from across the U.S. and around the world, including Australia, Belgium, Canada, France, Hungary, Norway, Venezuela, and the U.K. Tickets starting at $25 will be available beginning Wednesday, November 9. www.publictheater.org

Broadway producer Tom Kirdahy announced the creation of the Terrence McNally Foundation, continuing the legendary playwright’s singular legacy of mentorship and activism. The Terrence McNally Foundation is a 501(c)3 nonprofit organization committed to supporting bold new voices in the American theatre by providing financial and institutional support to early-career playwrights. In addition, the Foundation is committed to supporting LGBTQ causes, as McNally did throughout his life. Visit terrencemcnallyfoundation.org.