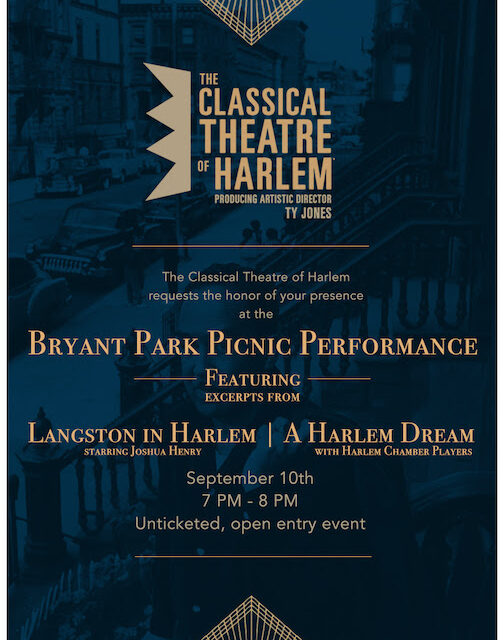 Join Classical Theatre of Harlem at Bryant Park Picnic Performance on Sept. 10, 7-8 pm for excerpts from for Langston in Harlem with Joshua Henry and A Harlem Dream with the Harlem Chamber Players. FREE

Call Fosse at the Minskoff  (produced by The Fabulous Invalid), a new 90-minute solo play written and performed by Mimi Quillin, and directed by Michael Berresse, will premiere at the Mahaiwe Performing Arts Center (14 Castle St, Great Barrington, MA) on October 15-16, 2021, at 7 p.m.

There are “legends” and then there are legends. In this entirely true, middle-age coming-of-age story, dancer and actor Mimi Quillin brings audiences along with her into the inner sanctum of two of the greatest giants the theatre world has ever known: Bob Fosse and Gwen Verdon.In Call Fosse at the Minskoff, Quillin recounts her experience working with Fosse and Verdon on what would be their final collaboration.

Tickets for Call Fosse at the Minskoff are on-sale now. For more information and to purchase tickets, visit the following link or call 413-528-0100

Cristina Fontanelli and friends will present Opera and Broadway of the Hamptons Sun. September 5 at 5 pm featuring chestnuts of the opera and Broadways’ greatest hits at Southampton’s Basilica of the Sacred Hearts of Jesus and Mary, 168 Hill St., Southampton…In addition, there is a roundtrip bus from Manhattan leaving 43rd St./9th Ave. at 9:30 a.m., returning after the performance. Info/Reservations: 212.967.1926 – Show Tickets HERE

The Head Tomato of The Three Tomatoes, Cheryl Benton, author of “Can You See Us Now?”, has launched her second novel “Can You Hear Us Now?” available on Amazon and other bookseller platforms. She describes it as a “perfect beach or anytime read” – check it out!