Theater News From Across the Pond 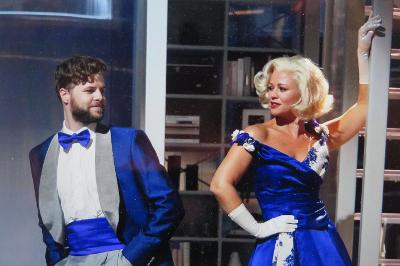 How much have you missed seeing a musical (LIVE) during this pandemic? Well, London theater has been experimenting with the extent it can tolerate adhering to safe protocols while offering a qualified return to live performances. Broadway producers might learn from London producers’ endeavors, as they examine how producers Michael Rose and Damien Sanders pull out all the stops to mount Sleepless: A Musical Romance with COVID-19 protocols in place. The musical is based on Nora Ephron’s 1993 hit movie Sleepless in Seattle.

Rose and Sanders opened Sleepless: A Musical Romance at Wembley’s Troubadour Theatre last week with appropriate social distancing, moving the 1200 seat theater down to 400 seats. It is the first full-scale indoor show to be staged since the March theater shutdown. Opening during the COVID-19 pandemic, which has taken 863,439 lives globally, makes this show a landmark in theatre history.

Sleepless is led by stars with their own fan bases. Kimberley Walsh plays Annie, Meg Ryan’s character and Jay McGuiness plays Sam, Tom Hanks’ character. Scheduled to begin previews in March instead of being shut down, the show’s jazzy score by two new British writers Robert Scott and Brendan Cull, the 12-piece orchestra and strong tie-in to the movie would have placed Sleepless in heavy competition with other shows at the time. With Rose and Sanders forging ahead, the publicity focus makes Sleepless the standout of the season with little competition.

Though there have been small-scale offerings at other venues i.e. the Bristol Old Vic, as well as outdoor productions, Sleepless is alone as a musical offering. It triumphs as theater’s brave and uplifting comeback despite COVID-19’s pitfalls. Though critics have reviewed Ralph Fiennes’ performance of David Hare’s monologue “Beat the Devil” at London’s Bridge Theatre which kicked off the season that includes a Talking Heads live staging, Sleepless producers are in a class by themselves with their carefully thought out approaches and consideration of what the cast felt most comfortable with (i.e. testing immediacy which actors have gotten used to).

The mighty swab holds great sway as cast and crew are tested daily before performances, an imperative which costs £60,000-£70,000 and lasts an hour to get through with a 60 person company. The cast waits until the test team processes the results in an area set up to accommodate proper protocols of spacing. There, medical personnel in personal protective equipment prepare the samples to input into a machine. The team collaborates with scientists in Poland if any of the swabs need additional examination and review.

If cast and crew pass, they are given a COVID-19 free zone imprimatur. Then, with masks on, they go into the theater space to prepare themselves for performances which are delivered without masks, with seeming normalcy, while the audience looks on masked and distanced.

Audiences have their temperatures checked upon arrival and follow a one-way route through the building if they need to use the restrooms. There is hand sanitizer everywhere you look. And food and drinks are paid by contactless cards. Deep cleans take place after each performance.

Interestingly, the plot which appeals with coast-to-coast physical distancing, by Guiness’ character in Seattle and Walsh’s in Baltimore, requires no physical amour. The emotional feeling is demonstrated with the book by Michael Burdette and music by Robert Scott and Brendan Cull. The most touching that occurs is at the end with the Empire State Building scene.

Critics who have seen the show have commented on the success of director Morgan Young’s staging as well as actors’ voices, the score and other elements of production. See “What’s on Stage.” https://www.whatsonstage.com/london-theatre/reviews/sleepless-a-musical-romance-walsh-mcguiness_52317.html

As other critics weight in, it is revelatory that the show has navigated the seemingly impossible hopelessness of what can’t be done by securing the possible with wisdom and respect for cast, crew and audience. COVID-19 is a tricky business. One must applaud the producers, cast and crew for their collaborative spirit, for their pluck, maverick drive and fearlessness. Clearly, they evidence their desire to bring joy and verve as they step out in front of the pack to show “it can be done.” Thanks to The Stage online for the additional content in this piece.