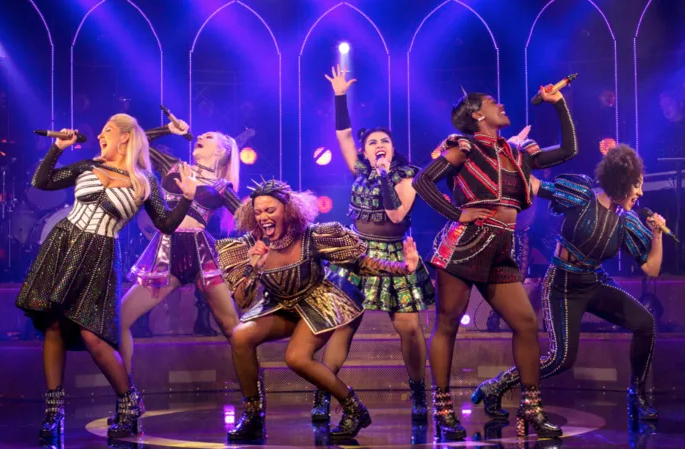 BROADWAY NEWS EXCLUSIVE: “Why ‘Six’ plans to reopen in London this fall” by Broadway News’ Caitlin Huston – “As he looks to reopen “Six” in London this November, producer Kenny Wax has the advantage of having a small cast, an 80-minute show and relatively low running costs. … He’s choosing to move forward for one main reason. “The answer is to give work to staff,” Wax said.

Wax is reopening “Six” at the Lyric Theatre in London for an 11-week socially distant run just as government aid for furloughed workers ends. While the musical’s framework makes it easier to remount during a pandemic, Wax and other Broadway industry leaders say Broadway will not see a similar move with ”Six” or other shows due to higher financial constraints, as well as current health and safety guidelines

The first two weeks have already sold out, Wax said. If the rest of the run follows suit, the production, which has running costs of about £70,000, can expect a weekly profit.

That would not be the case on Broadway.

Due to higher running costs and multiple union contracts, restarting “Six” or a similar production with social distancing on Broadway would not be economically feasible. … “To do that or do anything remotely like that, we’d have to break the financial model and nobody is willing to do that,” said Charlotte St. Martin, president of the Broadway League. And, at the moment, restarting an indoor production in New York is a non-starter, as Gov. Cuomo’s lockdown on Broadway theaters has not yet been lifted. … Many industry members believe that Broadway can only resume when there is a better treatment option for the coronavirus or the availability of a vaccine.

“The economics are obviously an issue, but the primary issue is when is it safe?” said Kevin McCollum, one of the Broadway producers of “Six.”  “Six” does plan to be one of the first shows back when Broadway reopens, McCollum said. Getting there, however, will take support from the government in the form of the Save Our Stages Act, as well as an additional funding package to help restart theater, he said.” http://bway.ly/pe0sv2

“PMC to Acquire Billboard, Hollywood Reporter and Vibe in Joint Venture With MRC” by Variety – “Variety parent company Penske Media Corp. has set a deal with MRC to acquire Billboard, Vibe and the Hollywood Reporter. The transaction calls for PMC and MRC to set up two joint ventures under a newly established entity dubbed PMRC. PMC will lead daily operations of an expanded entertainment and music brand portfolio under the PMRC banner that will bring two Hollywood trade institutions under the same roof for the first time. Billboard, Vibe and the Reporter will join PMC’s Variety, Rolling Stone and Music Business Worldwide.” http://bway.ly/duc6s5

TIME100: “Billy Porter, Anais Mitchell, Phoebe Waller-Bridge, and Tyler Perry Picked for TIME100” by BroadwayWorld – ” … TIME revealed its 2020 TIME100, an annual list of THE 100 most influential people in the world. Among the prestigious names are some familiar Broadway faces including … Anaïs Mitchell … Billy Porter … Tyler Perry and … Phoebe Waller-Bridge.” http://bway.ly/ubh893

“All those fancy Broadway costumes are now collecting dust” by Page Six’s Cindy Adams – “What’s happened to [the costumes] when theaters close and shows are shut? “They’re in locked rooms. Locked theaters. It’s the producer’s paid property. We don’t store anything. All belongs to the productions. The stuff is sitting around. Wrapped in acid-free tissue paper,” [said John Kristiansen.]” http://bway.ly/qb5e76

EQUITY: “The Hanover Theatre to Present First Indoor Performances Approved by Actors’ Equity in Massachusetts” by BroadwayWorld – “The performance is approximately 40 minutes in length, without an intermission. All patrons will be required to wear masks and have their temperature checked at the door.” http://bway.ly/kt298o

AT THE DRIVE-IN: “New Drive-In Movie Theatre in NYC to Screen The Phantom of the Opera, Starring Ramin Karimloo and Sierra Boggess” by Playbill’s Dan Meyer – “A new drive-in movie theatre experience in NYC will open with screenings of The Phantom of the Opera filmed at Royal Albert Hall … Prior to each showing, Phantom alums Ali Ewoldt and Derrick Davis will perform a live concert, accompanied by an 11-piece orchestra.” http://bway.ly/cqy4hd

ACROSS THE POND:
“Government confirms live theatre can continue and will be exempt from curfew” by London Theatre Direct’s Jade Ali – “Prime Minister Boris Johnson has given theatres the go-ahead to continue with social distancing measures. It was further confirmed by Culture Secretary Oliver Dowden that live events may continue in Stage 4 and will be exempt from the new 10pm curfew.” http://bway.ly/5irkv7

“Third of British musicians may quit industry amid pandemic” by The Guardian’s Ben Beaumont-Thomas – “A survey of 2,000 members of the Musicians’ Union found that 34% “are considering abandoning the industry completely”, because of the financial difficulties they face during the pandemic, as performance opportunities are severely curtailed.” http://bway.ly/b2gtg0

UP NORTH: “Canada’s empty theatres and venues [turned] red [yesterday] to #LightUpLive” by The Globe & Mail’s J. Kelly Nestruck – ” … hashtag campaigns taking place this week aim to remind Canadians that the pandemic plight of the live arts and events industry remains extremely serious … #LightUpLive … is part of what’s being billed “the day of visibility for the live event community.” Empty theatres and venues … illuminated in red an hour after sundown across Canada to raise awareness of, as the campaign puts it, “an industry that is still dark.”” http://bway.ly/oxi6hg

IN MEMORIAM:
“Tommy DeVito Dies: The Four Seasons Cofounder & ‘Jersey Boys’ Inspiration Was 92” by Deadline’s Greg Evans – “Tommy DeVito, a founding member and lead guitarist of the 1960s chart-topping vocal group The Four Seasons and the inspiration for a key character in the 2005 jukebox musical Jersey Boys and the 2014 movie adaptation, died from complications related to COVID-19 last night in Las Vegas.” http://bway.ly/13reog