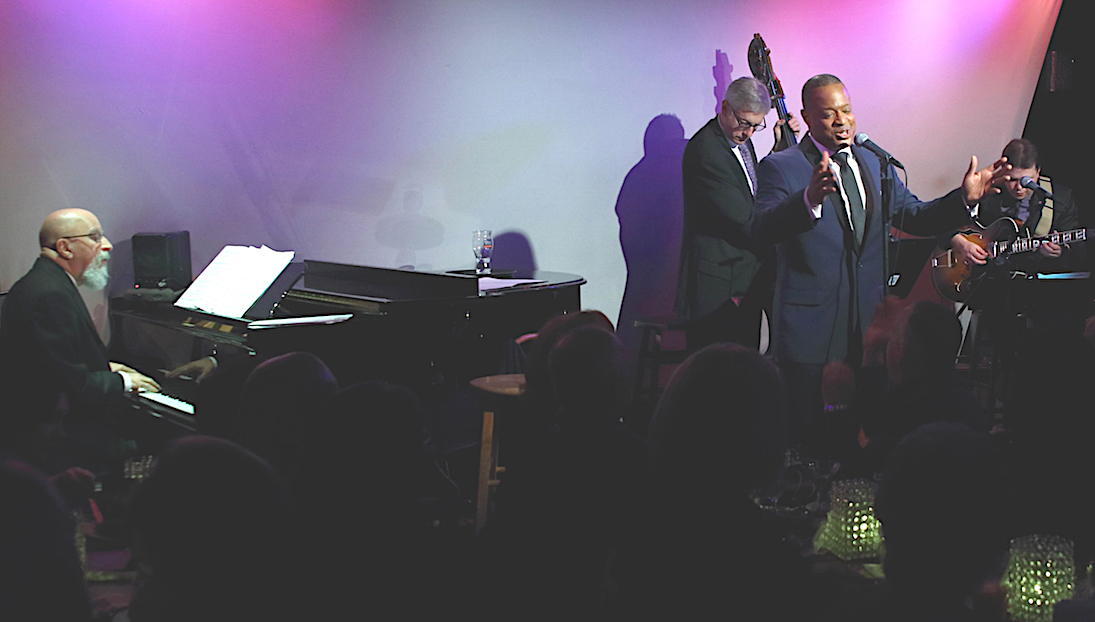 The room is packed to the rafters; an overheard conversation reveals the women at a nearby table have traveled three hours to be in this room. There are hoots and cheers, and lots of buzz. This hoopla becomes completely understandable when Shipley takes the stage and launches into the Cole-penned 1943 hit, “Straighten Up And Fly Right.” This five-time MAC award winner for Outstanding Jazz Vocalist has a honey baritone and charisma. When he sings on with two 1946 notables, “I Love You For Sentimental Reasons” (Derek Watson/William Best) and “Route 66” (Bobby Troup) the Broadway actor and voice-over artist reveals himself as a superlative entertainer. An elegant rendition of “Pretend” (Lew Douglas/Cliff Parman/Frank Lavere) solidifies that Shipley can really deliver the goods.

Unforgettable – A Tribute to the Jazz Great Nat King Cole is short on narrative and long on song. Jazz artists tend to lean that way, which is as it should be. Shipley pays homage to Cole, but never copies him. His timbre is smoother than Cole’s (who was pretty smooth himself), yet there are times when, in hitting a bottom note, he startlingly almost exactly matches Cole’s note for note. The invocation is welcome. Cole died at age 45, much too young. It’s good to be reminded of his accomplishments and his repertoire, including the big hits, such as “Mona Lisa” (Jay Livingston/Ray Evans), “Ramblin’ Rose” (Noel Sherman/Jose Sherman) and, of course, “Unforgettable” (Irving Gordon). As Shipley points out, Cole began in jazz. By age 16 he was already a masterful jazz pianist with his own trio. Singing came later, around 1940, with “Sweet Lorraine” (Mitchell Parish/Clifford Burwell). Shipley swung this tune, as well as a few others from Cole’s early years, including “Orange Colored Sky” (Milton Delugg/Willie Stein) and the haunting “Nature Boy” (Eden Ahbez). Like Cole, Shipley’s delivery is straight forward. There are no gimmicks or vocal gymnastics – just pure intonation, excellent phrasing, and sensitive interpretation. Nat King Cole started moving away from jazz into popular music in the late 1940s. Shipley executed a swift and charming “costume change” (jacket switched, hat added) to mark the transition. In the pop years Cole had hits with the likes of “Darling Je Vous Aime Beaucoup” (Anna Sosenko), “Non Dimenticar” (P.G. Redi/Shelley Dobbins-English lyrics) and “Let There Be Love” (Ian Grant/Lionel Rand), delivered by Shipley with sophistication. By 1956 Cole’s star had risen sufficiently that he became the first major black performer to host a variety show. Yet, The Nat King Cole Show was short-lived, due to the lack of a national sponsor. Shipley quoted Cole’s now-famous remark at the time: “I guess Madison Avenue is afraid of the dark.” As a compelling commentary, Shipley sang an aching “Smile” (Charles Chaplin/John Turner and Geoffrey Parsons). The Nat “King” Cole Show, premiered on NBC as a fifteen-minute weekly

In the pop years Cole occasionally returned to his jazz roots. He recorded a jazz album with his trio in 1957, After Midnight), on which “Caravan” (Juan Tizol and Duke Ellington/Irving Mills) appeared. Shipley aced the swing on this number, along with “Walkin’ My Baby Back Home” (Roy Turk/Fred E. Ahlert) and an upbeat audience sing-along to “L-O-V-E” (Bert Kaempfert and Milton Gabler). For an encore, Shipley performed a jazzy “Paper Moon” (Harold Arlen/E.Y. Harburg and Billy Rose) which featured a solo by guitarist Tom Guarna (whom it would have been nice to hear more of in the set). Music Director and pianist Mark Soskin and upright bass player David Finck completed the trio ably backing Shipley.