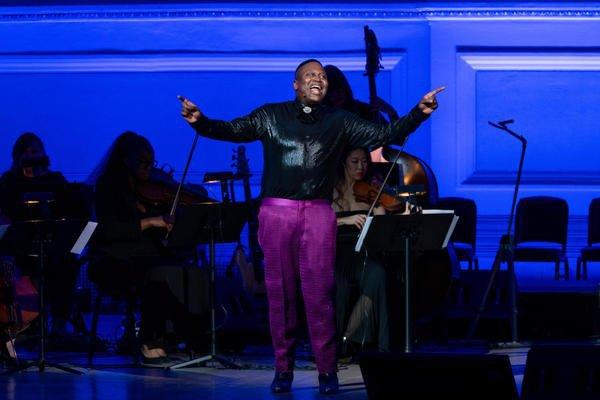 Such was the question posed — and answered — as multi-hyphenate performer and Emmy-nominee extraordinaire Tituss Burgess took the stage of Carnegie Hall for his glitzy, glittering tribute to the great Stephen Sondheim, in honor of the luminary’s impending 90th birthday. And whether familiar or peculiar, appealing or appalling, there was certainly “something for everyone” with any given note.

Skillfully employing the composer’s iconic catalogue as its foundation — spotlighting both well-known classics and lesser-known gems — the evening follows Burgess, equipped with a full-fledged ensemble, a razzle-dazzle 13-piece big band and a vast selection of sparkling outfits (natch), through a psychedelic pseudo-journey to craft his dream debut solo show amid multiple hiccups and distractions. 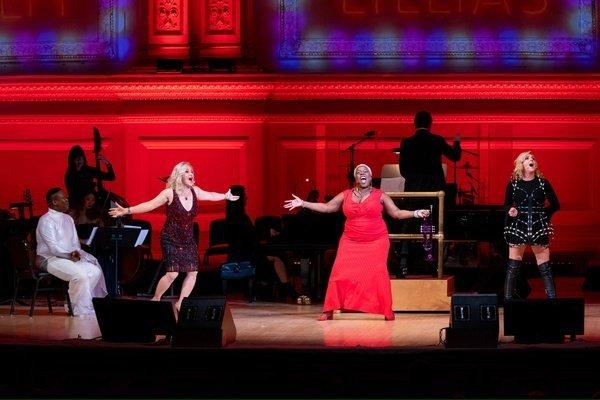 Among them are the cleverly utilized guest performers Jane Krakowski, Lillias White, and the singular Orfeh, each of whom thwart his attempts by unabashedly stealing the spotlight with knockout numbers of their own. Also on hand is expert conductor Charlie Rosen, assuming the role of second banana, who hilariously inserting himself into the action and nudging Burgess along in his quest.

Even the band themselves got in on the fun, with a special overture and subsequent interlude, both curated specifically for the event.

But of course, that’s in no way to say our golden-voiced headliner doesn’t shine glowingly and gloriously in his own right — in fact, through presenting himself in this raw and vulnerable way, he offers a surprising peek at his sensitive side, often buried beneath all the panache and Pinot Noir we’ve come to know from him in recent years.

He’s comfortable, at home and lapping it all up, no matter the style, genre or tempo of the number; he hits all the right notes on the comedic numbers (among them, Company’s “Not Getting Married Today” and the title number from Sunday in the Park — wherein he dons a dress as Dot!), as much as he moves the room with the melancholy ones, be it a stirring rendition of “No More,” “Anyone Can Whistle,” or the concert’s electrifying title number.

And of course, revered for his impeccable vocal range, spanning an impressive four octaves, Burgess seizes the opportunity to show it off on many occasions — fusing his fiery, flourishing bravado with a cool, calm confidence as only he can.

But as much as it’d be a treat to hear Burgess sing the nonagenarian’s praises as it is, the true success of the evening lies in its story’s subtle, poignant concluding message. A master at captivating an audience, he lures you into a snappy story, leaning into the humorous bits just enough to surprise you with sucker-punch at the end, when he shifts the narrative and truly conveys the impact the icon has had on his life.

His attempt to maneuver through his show mirrors the way he found himself maneuvering through life: both, not so coincidentally, with Sondheim’s help. Just as the fictitious Tituss, who struggles to find his footing while tempted by societal and social pressures, navigates his way through his concert using the composer’s beloved music, so too did the real Burgess use Sondheim to, like the character he portrays throughout the evening, help him find his way when he was lost.

In detailing his voyage from a small, rural farm town “in the sticks” of Georgia to the hallowed stage of Carnegie Hall, the actor solidifies that through an instance of divine happenstance, Sondheim indeed helped to, as the title suggests, “take him to the world” through his music, unknowingly opening him up and shaping him into the person he is today. 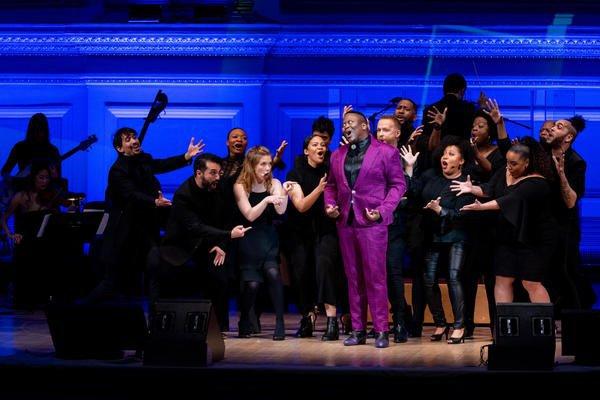 “Growing up in my Georgia church, I was always hoping to hear God, catch the spirit, and find my voice,” he explains candidly at a quieter point in the evening. “It wasn’t until one afternoon in my grandmother’s living room when I stumbled upon a PBS presentation of Sunday in the Park with George that I discovered the sound that would carry me away for life…. The orchestra began to swell, and it started happening. I started crying inconsolably. I had been to church enough [times] to know that I was worshipping… I was praising. By [that time], I had heard God called by many, many names. But when I met God, his name was Stephen.”

And if there was any doubt at the evening’s start, it’s a fact made undeniably clear by evening’s end. Because of Sondheim, to quote one of his own iconic lyrics, there’s a place for Tituss. Because of Sondheim, he is safe. Because of Sondheim, everything’s going to be okay. And in seeing Burgess express this love so candidly and personally, while driving home the idea of the haven he created for him, he’s, in a way, encouraging us to find that haven for ourselves. Anything can happen, and one day, you too could flip on the TV and discover a mentor who’ll drive you to follow that dream, nurse that passion, fulfill your life’s purpose, and know that, someday, somewhere, somehow, just as there’s a place for Burgess, there can ultimately be a place for you, too.

Tituss Burgess: Take Me to the World was presented at Carnegie Hall (57th Street and 7th Avenue) on February 1st. For more information regarding future performances, visit www.carnegiehall.org.