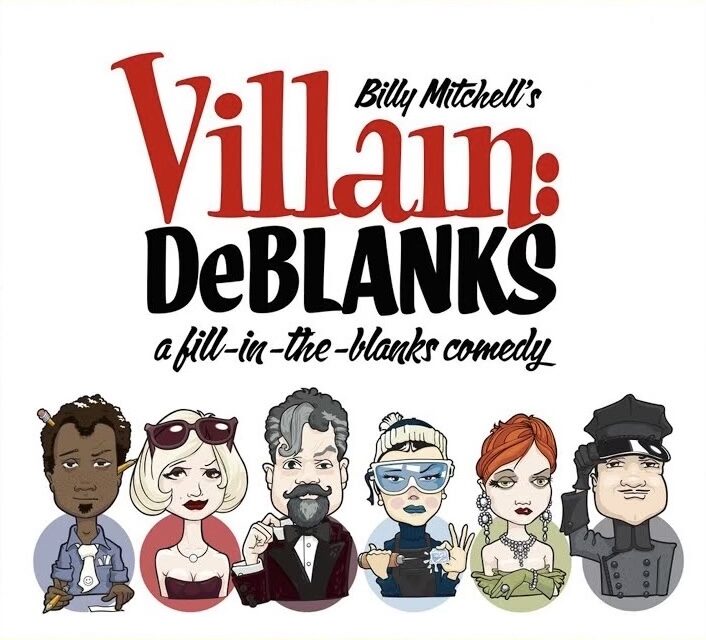 If you like puns (such as the title of this show, Villain: DeBlanks), a pre-Halloween Trick and Treat was had by one and all this past Tuesday evening in the cabaret space of The Green Room 42. The creation of funnyman Billy Mitchell, it’s a murder mystery aided by audience participation via Mad Libs, as interpreted by a cast of six actors who, on this particular night, consisted of major Broadway talents. At the top of the show, they gathered their nouns, verbs and adjectives while flitting through the crowd, charmingly engaging with the audience. This helped to provide stakes in the proceedings, as in my case where a suggestion ended up being the way the murder was carried out . . . suffocation under twenty-nine pounds of crème brûlée. Watching the six actors take on wacky characterizations (all suspects in the murder) aided immeasurably to the proceedings, as did the sight-reading, which made for some rough times with pronunciations and keeping things on track—all to comic effect.

First, if you don’t know what Mad Libs are, where have you been? First created in 1953 as a parlor game (does everyone still know what a parlor game is?), it was published five years later with fill-in-the-blanks to allow for unique creations formed from ordinary stories. More than 110 million copies of Mad Libs books have been sold since the series was first published and, fun trivia fact, one of the co-creators of Mad Libs, Leonard Stern, was one of the Golden Age of Television’s most famous names. He contributed to (among other series) The Phil Silvers Show (Sergeant Bilko), Get Smart and The Honeymooners, for which he wrote “The $99,000 Answer”—the classic episode where Ralph Kramden goes on a quiz show. His Mad Libs was the perfect remedy for restless kids on a long car ride and it was a personal family favorite, especially when working with nouns like “poop.”

The cast for this iteration included Todd Buonopane, Arnie Burton, Geneva Carr, Randy Graff, Marc Kudisch and Jennifer Van Dyke. In the spirit of punnery (is that even a word?), they were respectively cast as Aaron Matires, Bob Frapples, Rhoda Pony, Fonda Jewels, Orson Buggy and Lynn O’Liam (take a minute and read those names out loud a few times… Aaron Matires took me the longest). The accents employed, rampant egos, and thespian fortitude on display were all top notch, though if I were to play favorites, I fell for Burton’s posh Brit, Graff’s Russian madwoman and Carr’s breathy actress.

You had to be there to hear line readings of such Mad-Libbed creations as “I think you lured me to an Arby’s last week” or “I didn’t swing a penis at him!” The word “transmogrified” became a running gag due to most of the cast’s inability to pronounce it. It was that sort of night.

Besides all the fun, the evening benefited RIF (Reading is Fundamental), a charity nearly as old as Mad Libs. Never the same show twice, this production is for anyone out for a good laugh provided by an always reliable rotation of actors with nothing but mischief on their minds and talent in their kishkes (a Yiddish word for “a person’s guts”). And please, feel free to use that as an adjective to throw out when you attend Villain: DeBlanks.

Villain: DeBlanks was performed on October 18 at The Green Room 42 (570 10th Ave, between 41st and 42nd Streets, inside the Yotel hotel). For further details on future performances. Next performance, November 17. www.villaindeblanks.com