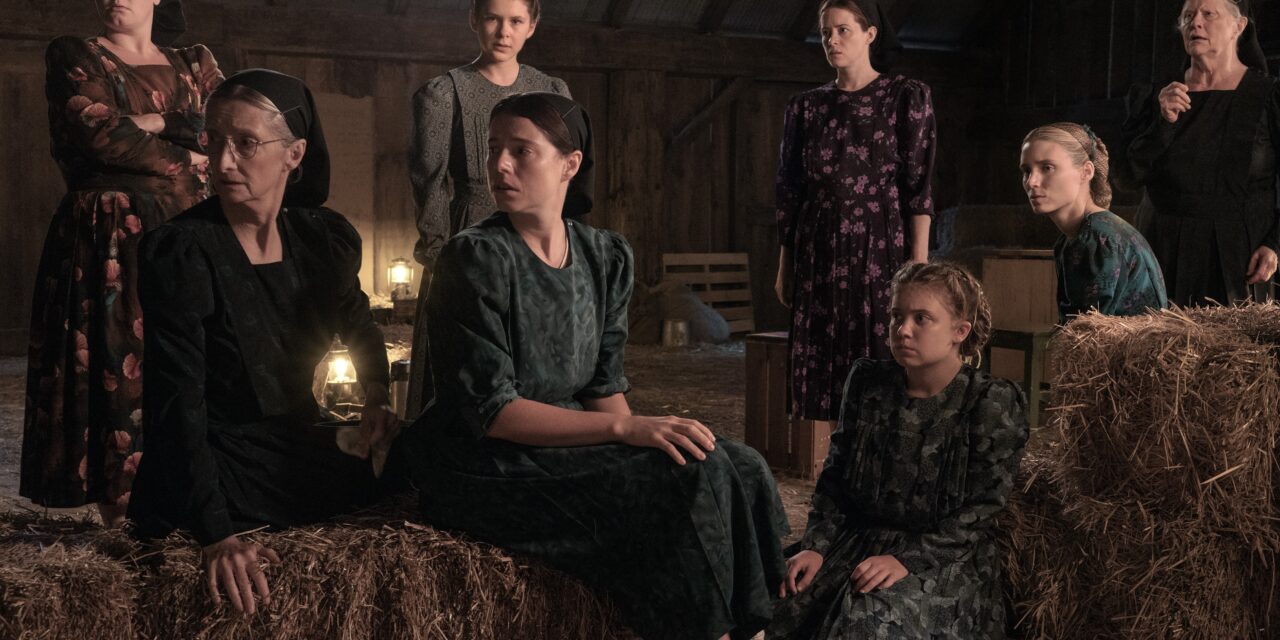 Sarah Polley’s spare, darkly spun, cinematic treatise Women Talking, is an imaginative adaptation of Miriam Toews’ titular bestseller. Toews’ novel is based on the true story of a Bolivian Mennonite conservative religious community guilty of conspiratorial sexual predation. Polley releases all the power of her considerable talent to expose specious arguments and fearful behaviors that women universally succumb to when dealing with predator partners, relatives or friends. The most crucial themes of the film explore the male conspiracy of silence, female shock and numbness, and the unwitting and witting behaviors of both which perpetrate the abuse and institutionalization of predation as a cultural norm.

Spinning off from Towes’ work, Polley focuses on her incredible ensemble cast (Rooney Mara, Claire Foy, Jesse Buckley, Judith Ivey and others) who do the heavy lifting as their characters debate their options to either stay or leave their religious community, the only place that they know and have felt comfortable, until the drugged sexual abuse happened to numbers of them. The women debate the pros and cons of emancipation with doubt, fury and determination. Part of the discussion is their justification for leaving a community that propounds forgiveness, truth, authenticity and marital and communal loyalty, in the face of the acceptance of pernicious sexual abuse.

Ironically, the qualities and values of the religion that the members lift up and follow are weaponized and turned against the victims who would attempt to accuse and hold accountable the perpetrators. Forgiveness and loyalty are expected to prevent escape, criticism, judgment and outside whistleblowing. Polley’s alignment with the post-MeToo movement resonates.

Eight women decide for the rest of the colony. If they stay, they will receive more of the same, perhaps death, so leaving is easy. Where they go afterward to create another life for themselves, in the world they’ve never really felt at home in, is a daunting challenge which they must take, as impossible as it seems. Thus, leaving is hard if they contemplate what happens afterward.

Locked in their roles within the paternalistic male culture, they must overthrow the tropes that have shackled them. One is the idea of forgiveness. Following their religion, they must forgive others’ trespasses and trust God that those who trespass against them will redeem themselves through love and prayer. During the discussion they determine that forgiveness and accountability merge at some point. One forgives the other if they admit fault and submit to the judgment of their wrongdoing. If they don’t repent and submit, forgiveness becomes permission to repeat abuse.

As the charged conversations unfold among the eight in a second story hayloft, Austin, a schoolteacher (Ben Whishaw), records the dialogue. Austin is the only male to be trusted. From the discussion we learn that the men demand loyalty but give none and lie to cover their dark deeds. As the women experience sexual assaults, they wake up with blood in their beds, evidence of sexual abuse, but no memory of it, having been drugged. Additionally, the men reply to the women that it is the work of Satan or a ghost or their own psychotic imaginations. Ultimately, the men learn to label the “hysterical” women as just wanting attention.

The conspiracy abides until a couple of girls catch one of the men in the act, and bring him to account, as he discloses the other abusers. When the predators are arrested, the remaining men of the colony get together the money to bail them out. In the interim eight of the women democratically discuss what to do and listen to all viewpoints.

With striking time inversions, Polley intercuts naturalism and detail with allegory and various victims’ flash-like remembrances of blood, bruises, cuts refracted from chronology as brief images. Thus, one woman removes her false teeth. Polley intercuts a pool of blood with teeth floating in it, from the physical mauling the wife sustained in the past.

The lighting is darker in the loft, as if the debating victims see through a glass darkly. The natural sunlight of the fields of crops where everything appears normal and beautiful provides a smashing contrast. The truth revealed in the dim light is pitted against the lies undergirded by the pastoral, peaceful, sunlit environs that are a blind, covering up the torture of women.

During the debate, each of the eight is heard, but three represent the leaders of the group. Wanting to fight and stay, Mariche (Jessie Buckley) is struck frozen by her fears of further abuse, and her own emotional complicity that arises during confrontations. Roiling that she and her daughters have suffered unjustly, she steams like a kettle about to boil over. Claire Foy’s Salome wants to “kill them.” She has been destroyed in her soul, believing it was her fault for receiving the harm to begin with. Only vengeance can save her. Ona (Rooney Mara) feels there’s been enough violence. Yet, she is confused by the concept of forgiveness as permission for further abuse. She listens carefully to the others’ concept of it and presents a main theme to the events that have occurred.

As an integral part of the problem, the norm of sexual abuse patterns has shackled all the men in the religious community. To fit in, the men accept the behaviors of toxic male machos. This normed behavior imprisons all of them. Ona determines that even the most vicious men in the colony can be seen as innocent since they are institutionalized as children to the patriarchy which accepts abusing and demeaning women as their righteous male privilege.

The cast is terrific. Polley’s film, one of the most important conversations about this topic you’ll experience, is heady and profound.

Women Talking will be exclusively in theaters beginning December 2, 2022. www.filmlinc.org/nyff2022/films/women-talking/