Anthony Rapp’s “Without You” 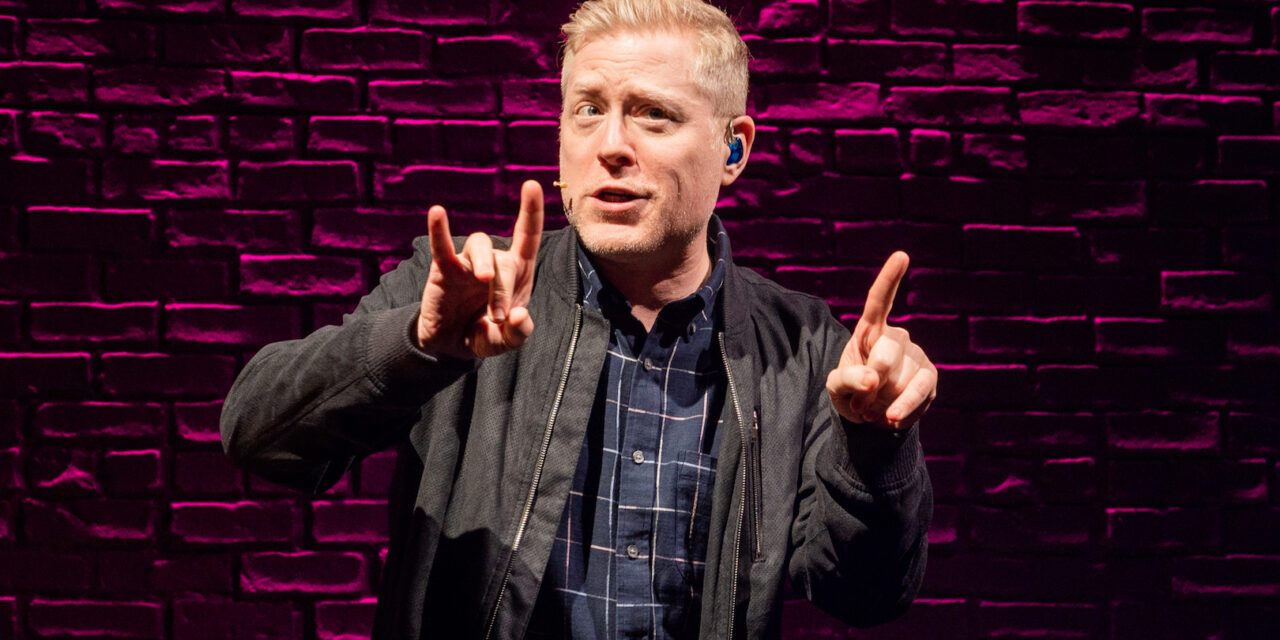 Singer-actor Anthony Rapp is remembered by many largely for his having created the role of filmmaker Mark Cohen in Jonathan Larson’s 1996 rock musical hit Rent; others may think of him as someone who accused Kevin Spacey of sexual misconduct (Spacey was acquitted of the charge last year). Whatever other noteworthy accomplishments are on his résumé (including a stint as one half of a gay couple on “Star Trek”), he or his producers obviously consider his name bankable enough to place it in the title of his moderately interesting, generally ingratiating, but nothing special 90-minute, one-person (band aside), musical memoir show, Anthony Rapp’s Without You.

In the show Mr. Rapp, a musical theater performer since childhood, says nothing of the Spacey scandal, but lots about Rent, to which he was connected from its workshop days to its Off-Broadway production to its life on Broadway (where it ran for twelve years), not to mention its 2005 motion picture version. The rest of his play concerns a personal matter, which is connected to Rent in being the second part of a tragic one-two punch that forced him to pile grief upon grief within a period of about a year.

During Rent’s early days, Mr. Rapp suffered the devastating loss of two figures of enormous influence on him, the first being Larson, who famously died of an aortic aneurysm on the eve of the musical’s Off-Broadway premiere. The second was Mr. Rapp’s beloved mother, who, after a prolonged struggle, died of cancer in 1997.

Needing an outlet to exorcize his sorrow, he published a bestselling memoir, Without You: A Memoir of Love, Loss, and the Musical Rent, in 2006. It reportedly took him six years to complete because of the trauma he’d experienced. Still dealing with his loss, he turned his memoir into a one-man show in 2010, combining conventional narrative with songs, by Larson, of course, but also mainly by himself, Daniel A. Weiss, Joe Pisapia, Tom Kitt, and David Matos, in various combinations of creative contribution.

Almost 13 years later, that show is now being given its New York debut at Off-Broadway’s New World Stages. It’s a straightforward, occasionally touching, borderline maudlin piece recounting Mr. Rapp’s background as a would-be performer growing up in Joliet, Illinois, son of a single mother who worked as a nurse. It introduces him as a striving actor in New York; his auditioning for and being cast by Larson in Rent; his devastation at Larson’s shocking death; and his subsequent heartache, not long after, when his ailing mother passes.

Larson’s death, of course, is the stuff of musical theater legend, written about in numerous accounts, but still capable of making an emotional dent when expressed by someone so close to it, especially when he’s able to share the backstage tales audiences thrive on. Coming as it did out of a clear blue sky, its story is more about the aftermath to the catastrophe than the lead-up to it. On the other hand, the death of Mrs. Rapp is reminiscent of one many of us have endured with loved ones, what with the diagnoses, the procedures, the suffering, the improvements and relapses, the hospice care, and the passing. In short, there’s not much new here.

The script weaves these stories together through musically underscored dialogue—Mr. Rapp channeling other voices, most effectively the warm, caring tone of his calm, non-self-pitying mother—and songs, with a five-piece band under keyboardist Daniel A. Weiss’s direction. The lyrics of Larson’s “Seasons of Love”—the one that begins “Five hundred twenty five thousand six hundred minutes”—one of the best known Rent numbers, become thematic through reprises. Eric Southern beautifully lights his own set of simulated brick walls onto which David Bengali throws multiple projections from Rent and Mr. Rapp’s own life.

Mr. Rapp sensitively encapsulates his close relationship with his mother, for whom her son’s queerness took some getting used to, and he shares occasional lessons he learned on how to deal with his sadness; although, depending on your own level of tolerance for such therapeutic advice, you may not find them particularly enlightening. It’s hard, however, not to feel a touch of self-exploitation in the proceedings, especially when, after losing his mother, he bursts into what comes off as a climactic 11 o’clock number of mournful emotion, Larson’s “Without You,” a song with big, loud notes buried in a rather monotonous melodic line that seems to beg for the fervent applause it generates. I found it hard to clap for the performance of a power ballad celebrating Mr. Rapp’s suffering.

Anthony Rapp’s Without You is smoothly staged by Stephen Maler, and Mr. Rapp is an engagingly talented, if not exceptional, presence, for whom this project is clearly a labor of love. I suspect that many prospective theatergoers will come from the ranks of the Rent idolaters, one of whom, seated a few seats away, was unable to resist not only expressively mouthing the lyrics, but gesticulating almost as if trying to connect with Mr. Rapp on stage. There were moments, in fact, when she proved the more distinctive of the two.

Card-carrying Rent-ers will have plenty here to celebrate. For those less enamored, this show may go Tick, Tick . . . Boom.

Anthony Rapp’s Without You. Through April 30 at New World Stages (340 West 50th Street, between Eighth and Ninth Avenues). www.withoutyoumusical.com