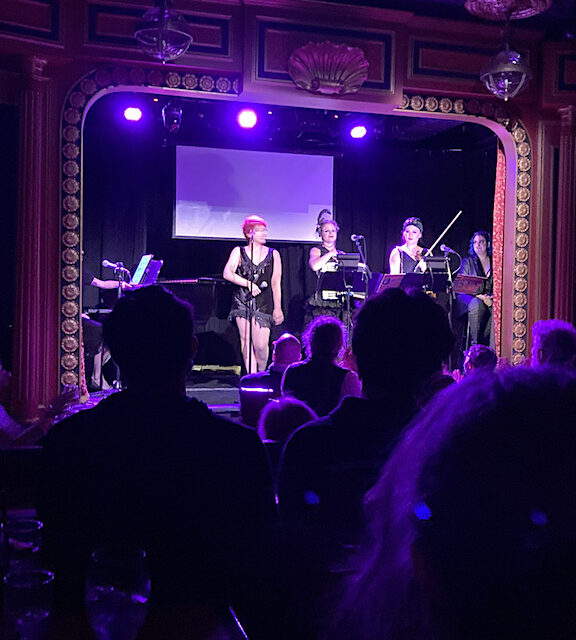 When live performance began again in NYC in June, 2021, Artemisia LeFay was one of the first cabaret acts to grace a stage. Her Ghosts of Weimar Past debuted at Don’t Tell Mama, reviewed here. Now, four months on, that original work has been expanded into a stage presentation that approaches the experience of 1920s Berlin cabaret during the short-lived Weimar Republic. Kudos to LeFay for the love of the music, the dedication to a relevant socio-political message and for the commitment to bring a delightful work at its core (with lots more potential) further down the road.

Instead of the narrative of the first iteration, Ghosts of Weimar Past has characters and scripted material to connect the musical numbers. Karmilla Vepp, LeFay was front and center displaying her glorious, well-trained mezzo-soprano on the set list, which included, often in superb German, “Jonny, Wenn Du Geburstag Hast” and “Ich Weiss Nicht/I Know Not” (both Friedrich Hollænder) as well as Kurt Weill with an English version of “Pirate Jenny” and “Je Ne T’Aime Pas” in excellent French. With her rich, sure vocals, LeFay is a top-notch interpreter of this work. It suits her and her enthusiasm and attunement to these songs.

The supporting cast, musicians who offered very finely crafted accompaniment, sometime vocals and dialogue between songs, were three: Moriah Feiner Trenk (piano) as Esmeralda, Mary Spencer Knapp (accordion) as Cici Vagari and Tiffany Weiss (violin) as Fraulein Bella. These players were introduced as “The Orchestra of the Depraved.” Taken as a whole, the onstage quartet projected dedication, energy and great musical talents. The jewel box style of the Triad Theater was also a very good match for the ethos of Ghosts of Weimar Past, with its supper club seating and that enchanting proscenium arch.

The dramatic thrust of Ghosts of Weimar Past is to bring attention to the similarities of 1920s Germany and the USA in 2020. Issues then, such as artistic freedom and equality, as well as the rights of non-heterosexuals, all issues of importance now. So is the modern struggle against dictatorships and oppression. Weill’s later composition (1942), “The Ballad of a Nazi Soldier,” one of the composers strong anti-war, anti-Nazi pieces (written after he’d escaped Germany), very pointedly illustrated the horrors of what happens in the hands of a dictator.

In the very artfully, beautifully produced program, Le Fay writes, in part, that Ghosts of Weimar Past is “a bastard child of musical theater and cabaret, of variety show and contemporary performance.” Therein lies the work’s weakness. Clearly the music and musical segments are nailed down with perfection, but the connective tissue points to a work in progress. A more focused dramatic arc is called for. LeFay is working hard to make Ghosts of Weimar Past all that she wants it to be. She’s not only the music director, director, writer and producer, but also the properties master and (wonderful) costume designer. (Renee Guerrero was musical consultant, Sam Bash stage manager and Shannon Epstein in charge of tech.)

Ghosts of Weimar Past is a show with lots and lots of potential. It should have a life and deserves to be taken to the next level. That level should be considered with a wider range of participation by others who believe in the project. The guiding hand of a book writer, dramaturg, and others with experience in writing and staging works of sophistication such as Ghosts of Weimar Past could take this fine show to further heights. If this should happen, we’ll be there with eagerness to see it all again.