As Long As We’re Together: Liz Callaway and Ann Hampton Callaway 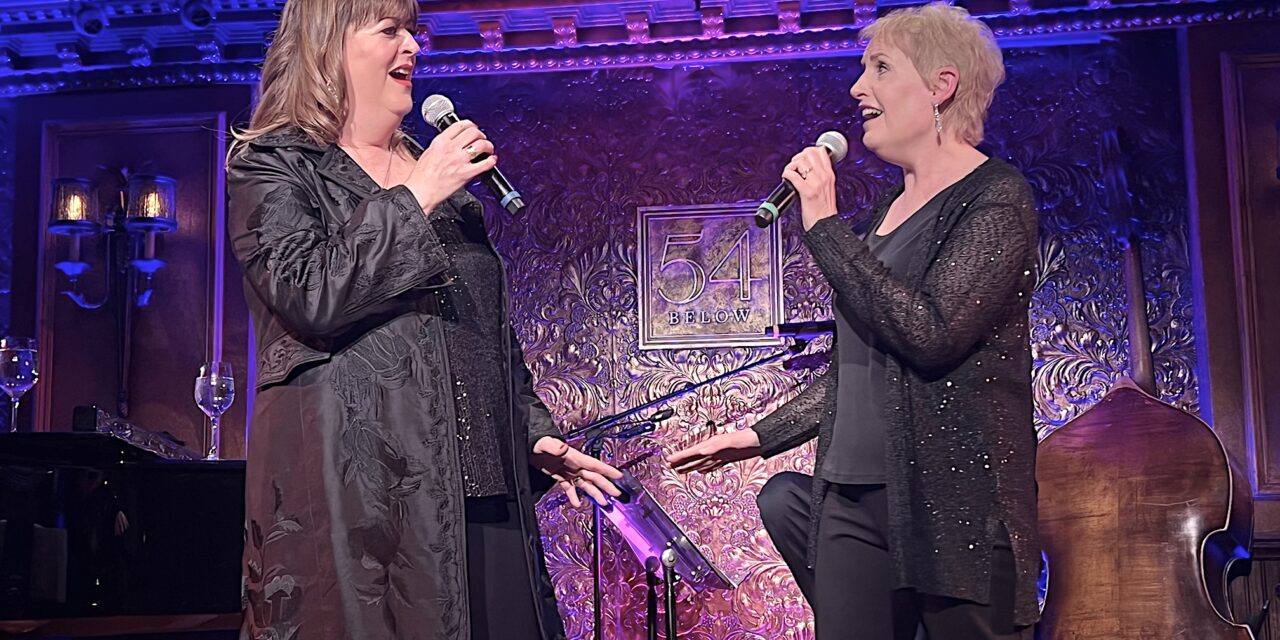 I’ve said it before, and I’ll say it again: when sister singers Ann Hampton Callaway and Liz Callaway join their unique voices in song, I will always remain astonished that two such different sounds make such beautiful music together. Ann’s deep and sultry tones offset by Liz’s sweet and bell-like clarity offer harmonies of effortless beauty. It is nothing less than awe-inspiring to have them back again at 54 Below for a week’s worth of Thanksgiving shows, where they exhibit a symmetry as satisfying as a roasted turkey and homemade stuffing (with some sly cranberry sauce on the side).

Their latest creative venture titled “As Long As We’re Together” is a potpourri of greatest hits from their variously themed shows over the years, most of which I’ve been fortunate to have seen at other storied venues between LA and NY. A “greatest hits” is not a bad idea as they have such splendid arrangements at the ready, most by longtime musical director Alex Rybeck (rock steady at the piano) and are well worth revisiting. Not restricting themselves to Broadway this time out, major sections here are devoted to Joni Mitchell, Stevie Wonder and Carly Simon. The truth is that whatever Ann and Liz did last night would be fine by anyone there, even if it meant heading out into the night and singing Christmas carols in front of the nearby McDonalds (not too crazy a notion with perhaps some new lyrics to old songs supplied by Ann, naturally).

Asking early on who were “Callaway virgins” amongst the crowd, there was a smattering of hands. Then Ann added, in her usual dry delivery, “Don’t worry, we’ll be gentle.” Not that any admonition was necessary as one of the things that sets these two entertainers apart individually and as a team is that they are so relaxed on stage (as Malcolm Gladwell would say, “they’ve put in the hours”). And as great as it is to hear them in harmony, it’s almost better when one gives the stage over to the other, seeing how heartfelt and true their mutual affection is. Ann’s first solo had her seated at the piano singing Joni Mitchell’s “Both Sides Now.” In her introduction, Ann mentioned that Mitchell was all of twenty-one when she wrote it and Ann herself only a teenager when she first heard it. As with many things, it’s taken her years to understand how deep the song goes, and singing it as a tribute to Mitchell’s resilience, recently coming back from life-threatening health issues, offered a poignance that was palpable. An evening with Ann at the piano, playing and singing with abandon, is something I would like to see sometime in the very near future.

When it was Liz’s turn to take the spotlight, her rendition of two Stephen Sondheim songs from Evening Primrose, the 60-minute television musical he wrote in 1966 with Follies playwright James Goldman, was exquisite. “I Remember Sky” and “Take Me to the World” are as poetic as anything in the Sondheim canon, and Liz managed to paint pictures with her singing that were like gorgeous water colors. When she and Ann sang “Our Time” together, the fact that it was a Sondheim song from Merrily We Roll Along, the musical that Liz appeared in on Broadway when she was just twenty, stirred up emotions for them both. In a story Liz told, the very first time she heard it she had to call Ann immediately, telling her, “it’s like it was written for us.” They then sang it as if they owned it.

Mention must be made of a tribute to Harold Arlen (these ladies KNOW their music) with Ann wailing “Stormy Weather” in counterpoint to Liz’s “When the Sun Comes Out.” Dramatically strong, terrifically sung, backed by Ritt Henn’s bass and Ron Tierno’s drums, it was a highlight.

The last four songs of the night were structured theatrically, building in power as they did (credit to the show’s director, Dan Foster). Dueting on Carly Simon’s “That’s the Way I’ve Always Heard It Should Be,” was quiet and contemplative; a medley of Stevie Wonder’s magnificent songbook was raucous and filled with hand clapping and feet tapping, and a blissful “Count Your Blessings,” Irving Berlin’s song of gratitude from White Christmas was paired with one of the greatest of grateful songs, “Grateful,” a lovely ballad by John Bucchino. Finally, for an encore, Frank Loesser’s “Brotherhood of Man” was an explosion of joy that set the whole place rocking.

I, for one, am grateful on this Thanksgiving of 2022 for two pros with love enough to spare for one another in addition to all they give to their audience. Feel that passionate energy on stage by going to see “As Long As We’re Together” at 54 Below before this holiday week is over. Liz and Ann will be grateful and there to thank you, I’m sure.