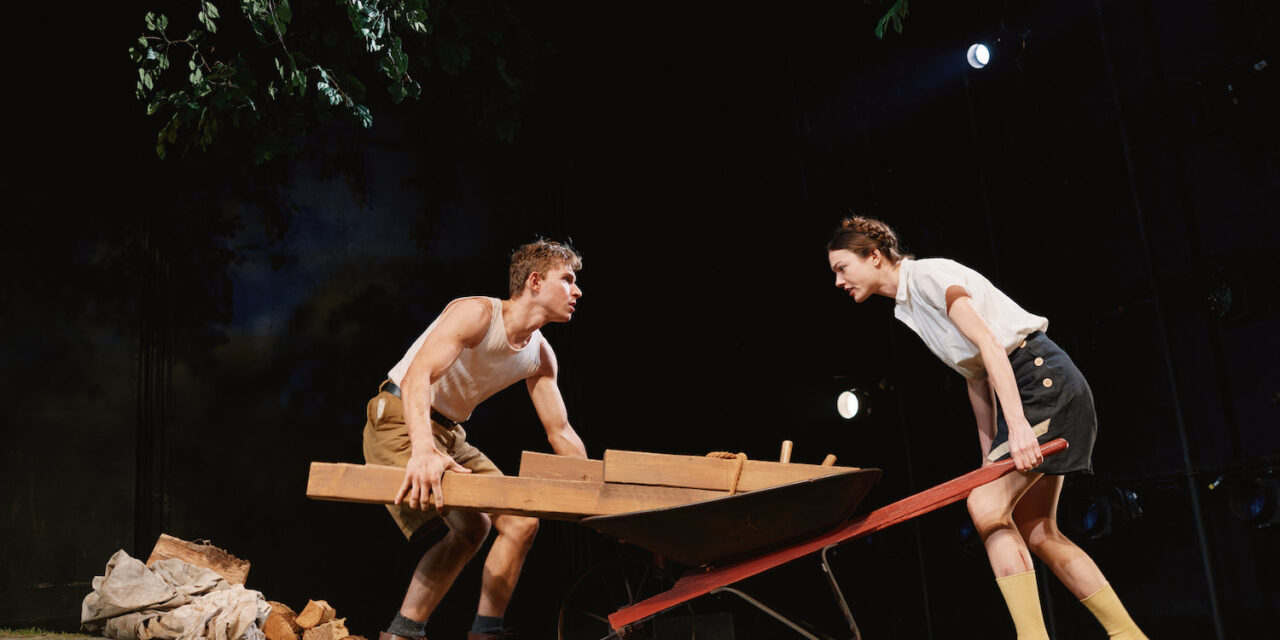 The story of summer love holds sweet promise in the theater, don’t you agree?

But not in the case of a certain summer, in a certain time and place . . .

Playwright Bess Wohl has dug deep into the past to expose a frightening chapter of American history that has hitherto been obscured. It happened far too close for comfort—right in our backyard.

The year is 1938. The place is Long Island, New York. The setting is Camp Siegfried—one of numerous summer camps established across the US by the German American Bund in support of the Third Reich. Established in 1936, the Bund’s membership consisted exclusively of American citizens of German descent. Its mission was to promote a positive view of Nazi Germany in the US and to disseminate anti-Semitic literature, holding rallies in which the Nazi flag flew alongside the American one. (It closed in 1941, when Germany declared war on the US.)

One of the Bund’s core efforts was the establishment of summer sports camps. The one that playwright Wohl discovered by accident and chose for the setting of her play was located in Yaphank, Long Island. It once featured streets named after Nazi leaders, including Hitler and Goering. There, in an intense program of sports and work, the campers—children of German families—were vigorously indoctrinated into the Nazi ideology.

The playwright could have chosen a number of more elaborate ways in which to imagine what happened in that camp. Instead, she wrote her new play, Camp Siegfried, as an eighty-minute two-hander, featuring a seventeen-year-old boy (He) and a sixteen-year-old girl (She), thus intensifying the focus, not to mention the stakes. The play follows these two campers in eleven short scenes over that fateful summer of 1938, as they meet, fall in love, and eventually are radicalized, with life-changing consequences.

Deftly directed by David Cromer at Second Stage, the play creeps up behind you innocently, before it reveals its true intent. He and She could be any pair of awkward teens, meeting one warm summer evening on a lush green hill (the set is by Brett J. Banakis). You can hear the music and laughter of a social event offstage, but these two shy teens prefer to remain on the periphery. As they become acquainted, they reveal their shared lack of self-esteem and aching vulnerability. He (played by Johnny Berchtold) lives in the shadow of his German-born father and older brothers, who call him a “runt.” She (played by Lily McInerny) is a wallflower from Baltimore. He is proud to be a German (“we invented Kindergarten!” he boasts to her). Though she is spending the summer on “Hitler Street,” she is indifferent, at least at the beginning. They are, in essence, thrown together as a pair of self-declared misfits.

Over a series of scenes, we watch at they engage in assigned work—the building of a large wooden platform. It’s hard physical labor (I actually found myself marveling at the strength of the actors!) While working, they practice their German and recite the assigned Nazi propaganda. Gradually, as their labor intensifies, their darker sides are revealed. He boasts about his brutal wrestling prowess: “I’m a killer now!” he exclaims. She boasts of her sexual experience with a married man, seducing him into a moment when, dominatrix-like, she forces him to his knees, humiliating him with taunts and insults.

As their radicalization intensifies, so does their mutual attraction. They make love on that grassy hill, and their ecstatic declarations are laced with references to German mythology. She tests him, asking if he would sacrifice himself for love, as Brunhilde did for Siegried. Later on, she suspects that she’s pregnant; he’s thrilled, since they’ve been told that their mission is to propagate. “This is what we’re supposed to do!” he exclaims.

The play crescendos to a shocking climax on “German Day,” when She—who has been chosen as “Girl Speaker”—delivers a hysterical Nazi propaganda rant in German, wearing a white dress with a wreath of white flowers in her hair. At first, he’s elated. “You’re like a Valkyrie princess!” he exclaims. But then, when she expresses doubts and hints at another revelation, he responds with violence—this time, against her.

In the play’s painful denouement, she reveals that she visited the local town doctor, who examined wounds on her body that were the result of hard physical labor. “What kind of place would do this to you?!” The doctor asks.

What is revealed in this determined, uncompromising play is the dark side of human nature, as well as its vulnerability. “Anybody can be seduced,” the kind doctor says. The anonymity of the characters’ names (He, She) indicates that all of us are capable of being brainwashed; and, yes, radicalized. At the same time, we all share a capacity for cruelty and violence. In this expertly directed, sensitively acted production, the message is universal and the warning is clear: “Never underestimate your infinite capacity for delusion,” is the doctor’s final warning.

Bess Wohl is among a growing number of playwrights this season who are warning us of the alarming rise of fascism and anti-Semitism today. Tom Stoppard’s masterful Leopoldstadt on Broadway deals with the tragedy of assimilation in Vienna during the pre-Nazi era, which turns out to be a revelation of the playwright’s own personal experience. In Clark Young and Derek Goldman’s Remember This: The Lesson of Jan Karski at TFANA, David Straithairn plays a courageous Polish diplomat who risks his life to warn Anthony Eden (UK) and Franklin Delano Roosevelt (US) of the Nazi extermination camps in Eastern Europe. This Beautiful Future by Rita Kalnejais at the Cherry Lane Theatre featured another young romance (between a French girl and a German soldier infatuated with killing) during World War II, as their older selves look back in rueful retrospection. Currently in London, C.P. Taylor’s Good tells another story of radicalization into Nazism—this time by a liberal British professor. These were preceded by Joshua Harmon’s aching A Prayer for the French Republic at the Manhattan Theatre Club late last winter, wherein a French Jewish family deals with the history of anti-Semitism in their country and the question of whether to stay or leave.

Will these warnings be heard? Will we listen? In her compelling, disturbing new play, Bess Wohl gives us a final warning that hits the mark so succinctly, so brutally, that it’s hard to ignore. As her young protagonist says in the play’s last moments: “You can already feel it in the air. Fall.”