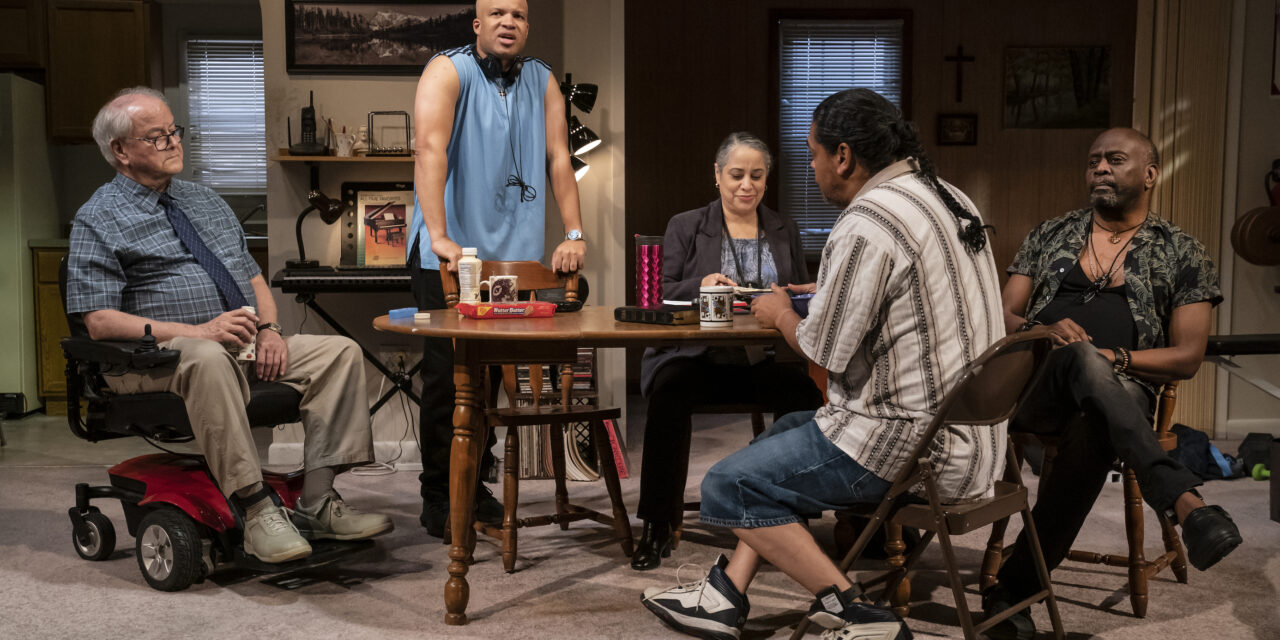 On a well-worn couch, Andy and Em are struggling to talk about the past but their halting, tense conversation with Fred is undermined as the older man charms and deflects, countering their efforts with an easy chuckle and an ingratiating tone. Then an ill-timed phone call and the incessant arrival of others interrupt again and again, generating nervous laughter in the audience.

It’s the standard surface of the single set drama, but in Bruce Norris’ “Downstate” that surface ripples with barbed wire, catching and tearing at the characters’ souls and at the audience’s notions about compassion and empathy, about punishing or understanding some of the worst people in society.

Norris– who won a Pulitzer Prize and Tony Award for his examination of racism in “Clybourne Park,” a funhouse mirror refraction of “A Raisin in The Sun”—confronts controversial material head on. And while “Downstate” stumbles in the second act with some distracting plot contrivances, Norris creates a clutch of characters who will linger long in your mind as you try to dissect exactly how much punishment and retribution is enough and how should we feel about these people whose behavior was deplorable but who still retain their humanity. He does all that while writing some genuinely funny moments throughout.

Fred, who is wheelchair-bound after being beaten in prison for his crimes, now lives in a group home for sex offenders who have served their sentence but are restricted by laws from finding normal housing. (Their home is also constantly under attack, by eggs and even bullets, by a less- than welcoming community whose NIMBYism is, in this case, somewhat understandable.)

His housemate Dee (K. Todd Freeman) fusses over him and tries to keep the house running but this caretaker veneer cannot hide a horrific tendency toward justification for his past behavior— when he was appearing in a production of “Peter Pan” he had an ongoing “relationship” with an underage Lost Boy– and hostility toward anyone who questions it.

Dee even challenges Ivy (Susanna Guzman), their probation officer, when she is pushing Felix (Eddie Torres), who is desperately lying to her about illegally cyberstalking the young daughter he once sodomized. (Torres breaks your heart as Felix… right up until the moment that it’s revealed what he has done.)

Rounding out the foursome is Gio (Glenn Davis), who semi-owns up to his statutory rape of a teen girl, but who chafes at his post-prison punishments and looks down on his current company as being, unlike him, irredeemable. (Davis is good in the fast-talking schemer role, but it’s underwritten and leans toward caricature, especially Gio’s constant empty talk about business plans.)

In Norris’ hands, Gio’s crime does seem the least awful, with Felix’s the worst, followed by Fred (as a repeat offender of young boys)– but their consistent self-pity and bobbing and weaving away from responsibility makes them all infuriating even as Andy’s justifiable anger and outrage turns darker and more unhinged, leaving us questioning everyone’s behavior to some extent.

Norris offers no easy answers. Fred’s attempts at playing Mr. Nice Guy are shamefully obvious, but at least he eventually openly admits to Andy that he was guilty and that his behavior was wrong, and he should have been punished. Still he’s incapable of giving Andy the full-throated apology that Andy seems to crave (though it’s unclear that would be enough or even help in Andy’s case).

Dee’s outlook and behavior is reprehensible—you’ll want to throttle him until you hear him talk about being removed from his grandparents’ home at age four after his Sunday School teacher noticed the bruises on his neck. It will, however, take less than a minute for him to raise your ire again as he purposely pushes Andy’s buttons in an effort to protect Fred and, by association, himself.

These are excruciating and demanding roles and Hopper’s anguished agitation, Guinan’s practiced affability and Freeman’s knife’s edge balancing act of smooth and suave with heartless viciousness are all riveting and nuanced—lesser actors could easily have worked to tilt the audience in their character’s favor, a problem in any show, but especially in one as fraught and textured as this one. (The detailed set, down to the tacky posters blaring “Perseverance,” and Pam MacKinnon’s largely assured direction, are also admirable.)

The contrivances of the second act– especially scenes involving Gio’s young-ish work colleague Effie (Gabi Samels), whose intriguing backstory is minimized since she’s really serving as a plot device– not to mention a major reveal that audiences will likely see coming in advance, make it feel like Norris is working too hard to provide action.

Andy asserts himself more in the second act than he had in the first, but he gradually loses his narrative thread; this isn’t a flaw—Norris is showing how Dee and Fred are still masters of manipulation. Moments later, a tender and revealing conversation between the two pedophiles helps humanize them once more, again undermining the audience’s sense of what we know or think we know about the people all around us.