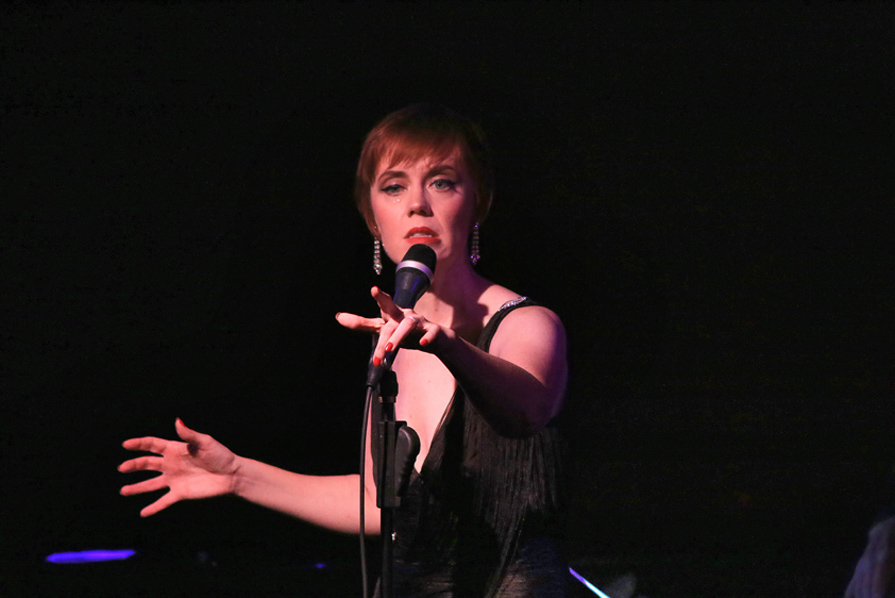 “I’ve posed for pictures with Iv’ry Soap/I’ve petted stray dogs, and shied clear of dope… but  “I Wanna Be Evil” Carole J. Bufford declares roiled and ready. Wearing a Morticia-Adams-goes-flapper dress, she struts and sizzles, elongating words, hissing sses, “Whatever I got, I’m eager to lose…”  (Lester Judson/ Raymond Taylor)

Halloween is the artist’s favorite holiday.  “Hookers and stalkers and songs about murders,” she sighs, “these are a few of my favorite things.” Who better than a wide-eyed, fresh faced, Midwestern pixie to counter appearances and effectively delve deep on the dark side? (This, and her sharp intelligence is why seduction songs land so well.) Bufford was never interested in playing princesses. Give her villains any day! Describing “Cruella De Vil” (Mel Leven), she rolls the lyric around in her mouth like caramels before biting.

Bufford asked Facebook friends to suggest songs. She received 170 responses. Adding her own signature research, the vocalist came up with an evening of eclectic material befitting the day and her clandestine proclivity. It was wickedly grand. Who else would disinter Fletcher Henderson’s “Send Me to the ‘Lectric Chair” (replete with a Bessie Smith jealousy story.)

Not only are there songs with obvious victims, brutes and dire intentions, but implication is mined. “Girl Crush” (Liz Rose/Lori McKenna/Hillary Lindsey) and “Angie Baby” (Alan O’Day-popularized by guileless Helen Reddy) appear at first hearing to be, respectively, fairly innocent western and pop songs. Bufford determines that both are obsessive scenarios, leading to rape and/or murder. She convincingly performs them that way, sometimes spitting lyrics as if venomous.

Bufford has a good time with perversity and potential assault, satirizing situations. And it works. “No one wrote nasty characters better than Randy Newman” introduces the frightening “Germany Before the War” which sounds like an original Friedrich Hollaender turn. Out of context, this would send chills up the spine, especially today…not that one is immune tonight. Newman’s “Suzanne”, pouring like molasses proclaims:

“I’m gonna wait in the shadows
For you to come by/And then I’ll jump from the shadows/And try and catch your eye…” which could be one man’s idea of romantic, BUT.

Even rock is interpreted as bordering demonic in Bufford’s hands. Bob Seger’s “Fire Down Below”- “FI-YER!!! finds the vocalist on parade, sliding, shimmying, wailing, eyes wide. “It’s like a number from a dark, twisted musical,” she comments. Sting’s famous “Every Breath I Take”, evidently written when he was caught having an affair with his wife’s best friend, arrives in a terrific new arrangement rife with surveillance and threat. John Fogarty’s “Bad Moon Rising”, rendered eerily with bass solo evoking a horror film saw, morphs to hard, heated rhythm. Bufford is nothing if not vocally agile.

We close with a gale force “St. James Infirmary” (traditional/Irving Mills) which ranges from N’Orleans marching band to stripper evocation. Ian Herman’s legendary four hands (seems like it) carry us away.

Carole J. Bufford will return to Birdland December 9-11 with a show of Vintage Pop.