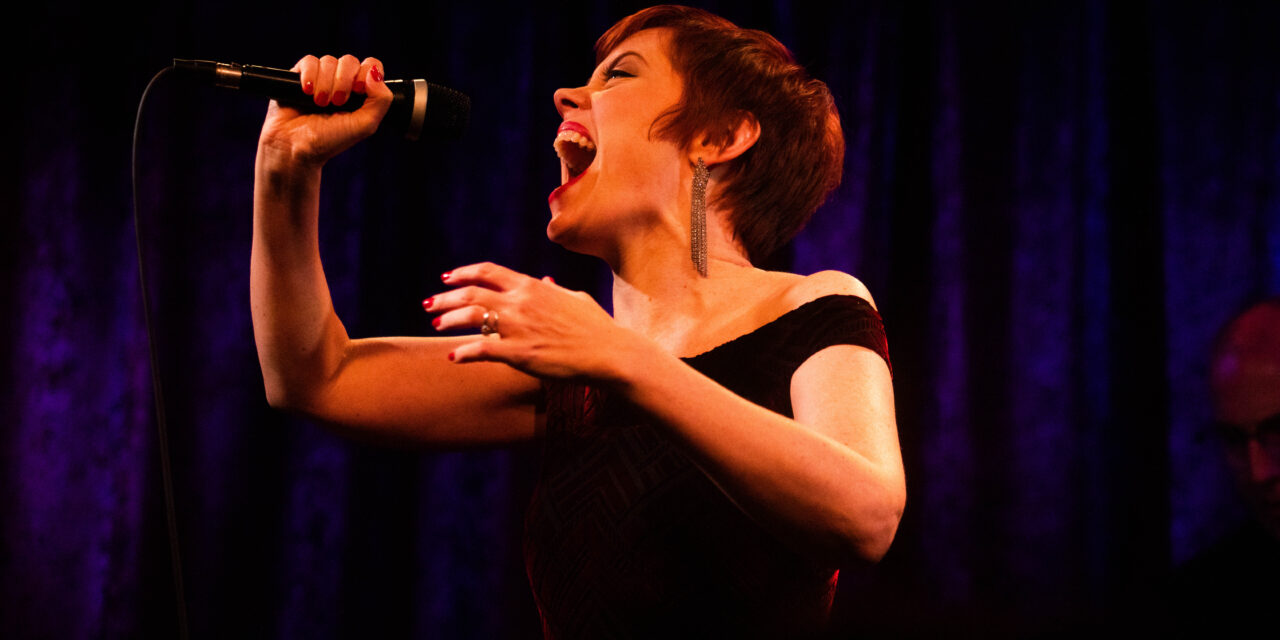 I first encountered singer Carole J. Bufford at maybe two in the morning at Mimi’s piano bar many years ago, when, in an “only in New York” moment, she came in after a performance at the old Feinstein’s at the Loew’s Regency, slinked onto the piano, and sang with the late Hunter Blue (aka “Chicken Delicious”).  The Georgia native certainly left an indelible impression.  Since that night, this very talented performer has come a long way as a popular cabaret performer.  Theater Pizzazz caught the first set of her three-night, six-show run of Vintage Pop at Birdland Theatre, accompanied by pianist Ian Herman, Tom Hubbard on bass, and Hughie Gordon on drums.

Ms. Bufford appeared luminous and in Technicolor, with her bright red hair, a sparkly dark blue dress that flaunted her fit frame, and of course, those magnificently expressive eyes.  (Photographs supplied by David Rosen from the Sunday show have her in a dark maroon dress.)

The star, along with her music director Ian Herman, created a delicious winter stew of stories, anecdotes and marvelous song choices of “vintage” songs.  The selections represented every decade of the twentieth century, from 1901 to 1988, in chronological order except for the opening number.  With Carole’s boundless and contagious energy, the 1946 “It’s A Great Day” (Dave Barbour/Peggy Lee) was the perfect mood setter to kick off the show.

A great “who knew?” story of the origin of the 1902 “Bill Bailey, Won’t You Please Come Home?” opened Carole’s early blues medley.  The songs, about love gone wrong, got hotter as she moved through “St. Louis Blues” and finally ‘A Good Man is Hard to Find,” one of two songs arranged by Larry Lees.

With just the melodic walking bass lines of Tom Hubbard to accompany her through the first chorus, Ms. Bufford performed “Bye Bye Blackbird” by Ray Henderson and Mort Dixon in a sizzling arrangement that was a far cry from its humble beginnings as a Gene Austin hit record.

The star performed a gorgeous ballad version of Rodgers and Hart’s “Blue Moon,” complete with the verse.  Surprisingly, this melody had its start as a completely different song, “Prayer (Oh Lord, Make Me a Star),” meant to be sung by Jean Harlow in Hollywood Party.  It was dropped, and rewritten two more times with different titles and lyrics, before finally getting pulled from the trunk once again as “Blue Moon.”  In a wonderful bit of business, Carole sang part of each of the three previous iterations of “Blue Moon,” the first in a Jean Harlow whisper, with a longer version of third attempt, as “The Bad in Every Man,” getting a chorus of “ev-er-ry” from the trio each time that word came up.

She relayed the origins of the unlikely Andrews Sisters hit, “Bei Mir Bist Du Schon”, originally a 1932 Yiddish song adapted by Sammy Cahn and Saul Chaplin in 1937 after they lucked upon a pair of black entertainers singing the song (in Yiddish!) in the Catskills.  The arrangement began in something of a Weimar Republic cabaret style, gradually building up in speed to a nearly breathtaking pace.

In another piece of completionism, Carole performed the Christmas standard “Have Yourself a Merry Little Christmas” with every change from the original, somewhat depressing lyrics, including the line written specifically at Frank Sinatra’s request (“Hang a shining star upon the highest bough” to replace “Until then we’ll have to muddle through somehow”), with the most morose line, “This may be your last,” spoken ominously, to great effect.

The 1950s presented an opportunity for the star to literally shake it up with a medley of “All Shook Up” and “Whole Lotta Shakin’ Goin’ On,” performing the songs more like black blues singers such as Big Maybelle, slow and hot.  Carole went from the role of a sultry blues singer to that of a little girl with the novelty Christmas song, “I Saw Mommy Kissing Santa Claus,” shifting back to adult voice with the addition of some naughty, sexy lyrics to this otherwise innocent song.  (Or, to borrow from Tallulah Bankhead, the new lyrics made it “pure as the driven slush.”)

Carole romped through the 70s and 80s with a string of fine numbers, including a wistful “Have You Ever Seen the Rain” and an humorously menacing “Every Breath You Take,” before the star closed the set with a powerful rendition of Tina Turner’s huge hit, “The Best.”  A sweet encore of “It’s a Sin to Tell A Lie” brought her back to 1936, and had the Birdland crowd dancing out the door, back to the future.

Carole J. Bufford puts on a great show.  She has something of a chameleon quality to her performance.  She often channels the performers associated with the songs performed, not as an impression, but more in what seems as a natural, subconscious manner.  She uses her body movements, facial expressions and her eyes to create even more volume in the performance than her substantial voice, in a manner reminiscent of great pop performers like Fanny Brice, Liza Minnelli and Madonna.