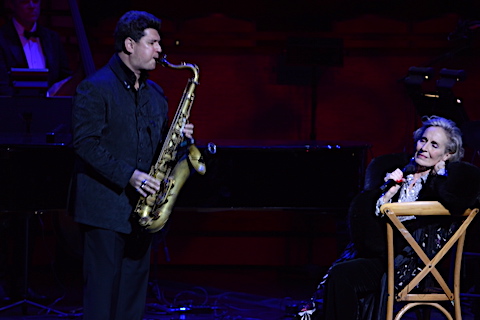 Every autumn, there’s a much-anticipated event in the worlds of cabaret, popular song and jazz—the Mabel Mercer Foundation’s Cabaret Convention. This 33rd edition—Look To The Rainbow: The Songs of Yip Harburg—was the proverbial breath of fresh air following several years affected by the COVID pandemic. The evening began with the strength of Clearly Now (Sean Harkness, Marcus Simeone, Lina Koutrakos) with a rich jazz arrangement of “Over The Rainbow” (music by Harold Arlen). The house band, pianist Jon Weber, bassist Steve Doyle and drummer Dan Gross, were joined by Danny Bacher on soprano sax. With their polished harmonies, Clearly Now raised the energy of Rose Hall to a level that portended great entertainment to come—and that it did; by the end of this Harburgian feast, spirits were high, especially in anticipation of nights two and three to follow. In the polished and delightful harmony department, Those Girls (Eve Eaton, Wendy Russel, Karen Mack, Rachel Hanser), with Steven Ray Watkins at the piano, sang a deliciously fun “The Begat” (music by Burton Lane).

Yet, there was one disappointment to be borne. The tradition of long time co-hosts Jeff Harnar and Andrea Marcovicci leading the evening was not meant to be. On the very morning of the first installment of the Convention, Harnar tested posited for COVID, a sadness that only underscored that after two and a half years, the pandemic is still rearing its ugly head. Marcovicci soldiered on, steadily helming the hosting spot and contributing song as well—her solo number being “What Wouldn’t I Do For That Man?” (music by Jay Gorney and Annette Hanshaw), demonstrating only one of many songs choices reflecting Harburg’s output over roughly a 40-year career. And since the recipient of this year’s Mabel (Mercer) Award is Harnar, the citation was read and presented in absentia.

With also providing tenor saxophone texture to Marcovicci’s spotlight number, it’s only fair to say the evening belonged to Bacher in not small measure (it was also a treat to hear him on the tenor, since his specialty is the soprano sax). Bacher, with tenor, also played on several other numbers in the show, including Leanne Borghesi’s red hot mama rendition of “Satan’s Little Lamb” (Arlen), with Nicolas Perez on piano, and Joey Lamb on trumpet —and Borghesi and Marta Sanders “Napoleon” (Arlen) with Alex Rybeck manning the piano. Dressed in mardi-gras meets tenderloin costume, these two show broads were having a ball on stage, and that translated to happiness in the audience. And last, but not least for Bacher, was his solo turn with “If I Only Had A Brain” (Arlen). It’s quite unusual to see Bacher perform without his horn, but this he did, not only allowing us to hear his mellow vocal tone uninterrupted, but to witness his dancing ability. Unable to go full-out tap on the delicate stage of Rose Hall, he substituted an elegant soft shoe, burnishing his showman image to a high polish.

Among the beautiful renditions of song, there was comedy. Tovah Feldshuh, as Tallulah Bankhead, costumed in wing and gown and bearing a cocktail glass and cigarette holder, quipped and sang through “When The Idle Poor Become The Idle Rich” (music by Burton Lane). Needless to say, Feldshuh had the audience in stitches, as only she can do. Also from Finian’s Rainbow, Ann Kittredge, elegant in a beautiful gown given to her by Marcovicci, and in full operatic mode, sang a gorgeous, evocative “How Are Things In Glocca Morra?” with Christopher Denny at the piano and superb guitar enhancements by Harkness. Other divas contributing to the evening included solos by Marissa Mulder with “It’s Only a Paper Moon” (Arlen), Karen Akers with “Paris Is A Lonely Town” (Arlen), Maude Maggart with  “Look To The Rainbow” (Lane), operatic mezzo Paula Dione Ingram with “Right As The Rain” (Arlen), Elena Bennett, with long-time collaborator Fred Barton on piano, with “Thrill Me” (music by Lewis E. Gensler), Madalynn Mathews with “It Might Have Been”and Anna Bergman, with Alex Rybeck at the piano, with “What Is There To Say/Here’s To Your Illusions” (music by Vernon Duke, music by Sammy Fain). In a class by herself, the force of nature, Marta Sanders, with Alex Rybeck at the keys, delivered “Brother Can You Spare A Dime” (music by Jay Gorney) in full, evocative acting mode, sending chills up spines with the tragic story of riches to rags relevant to the 1929 stock market crash and subsequent depression.

Of course, there were divos—male soloists who inspired with vocal styles all their own. Crooner Todd Murray, with Alex Rybeck at the piano, swung a delicious “Old Devil Moon” (Arlen) with suavity and pizzazz. Christian Holder, fresh from his home in London, came on to delight with a Noël Coward style “Last Night When We Were Young” (Arlen), while old-school Las Vegas style singer Andrew Walesch offered “When I’m Not Near The Girl I Love” (Lane).  Michael Denby Cain took on a Bobby Short staple, “Down With Love” (Arlen) and the intense, direct and heart-centered Ari Axelrod sang meaningfully “Silent Spring/Adrift On A Star” (Arlen, music by Jacques Offenbach/Jay Gorney). What was missing were the numbers that Harnar would have sung if he’d been present.

As for an ending, that distinction fell to dulcet-voiced Josephine Sanges, with her long-time pianist-music director John Cook at the piano.  Holy cow, but Sanges was on fire, pulling out all the stops with a jazz version of “Ding Dong The Witch Is Dead” (Arlen). She possessed the stage, with riffs and phrasing that was amazing and stunning. Sanges can swing and that she did in spades. It was only left to the entire cast to create their impressive line across the width of the Rose Hall stage to close out with “Look To The Rainbow.”