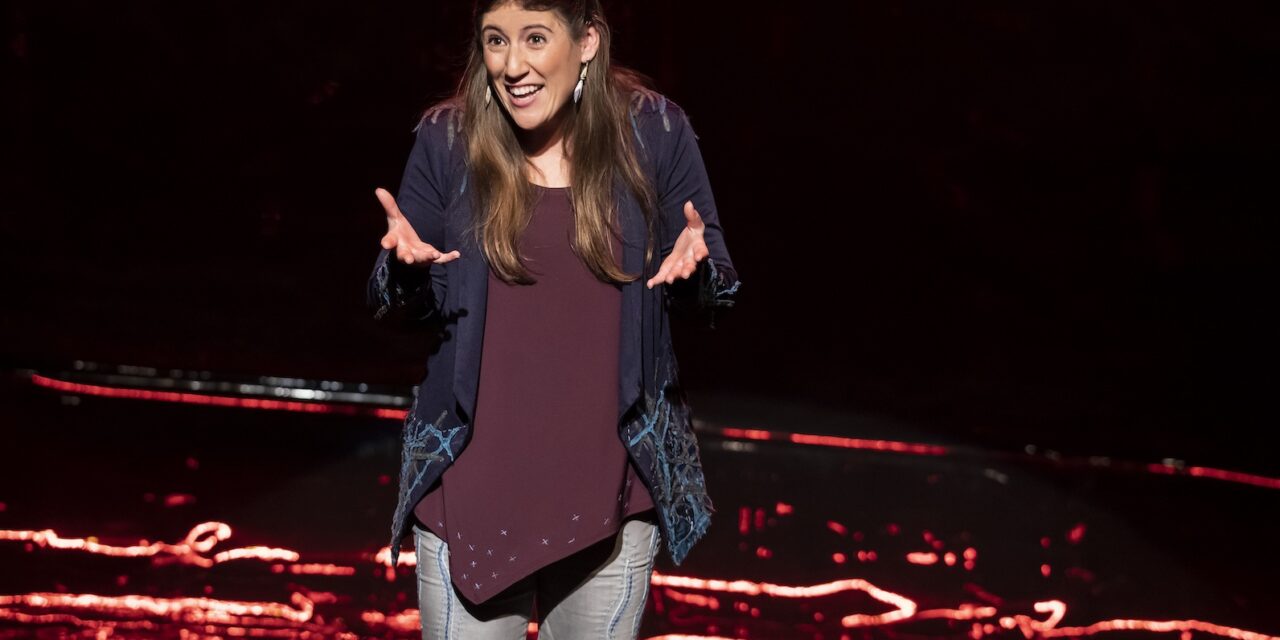 How far back can you trace your lineage? For Madeline Sayet, Native American theater-maker and lover of Shakespeare, the challenge of understanding her identity as a Mohegan became paramount once she understood the importance of carrying on the legacy of her tribe. Her transformative journey in understanding becomes the focal point of her stunning and dynamic solo performance Where We Belong directed by Mei Ann Teo, currently running at the Public Theater.

Dramatically adapted from her titular book and in collaboration with Woolly Mammoth Theatre Company and the Folger Shakespeare Library, Sayet acquaints us with stories and details about the Mohegan Tribe not covered in history books. Hers is an insider’s perspective. For example, she highlights the Mohegan separation from the Pequot because their Sachem saw the power of the colonizers’ guns and valued survival. Meanwhile Pequot leaders thought they could overcome the colonizers in a fatal misjudgment. Thus, we learn Mohegans sought survival but at what cost? In Where We Belong, Sayet reveals the cost in her intellectually mind-blowing, funny and brilliant 80-minute play.

Performed with dramatic vitality, Sayet alternates poetic monologue and dialogue to illustrate her themes about colonialism and its impact on Mohegan culture. Among the individuals she highlights is her mother, a Medicine Woman of the Mohegan tribe with whom Sayet often interacts.

At key junctures, their conversations reveal her mother’s guidance and knowledge about their heritage. Her mother encourages Sayet’s responsibility in carrying on and strengthening the Mohegan legacy.

Sayet includes many funny exchanges with her mother. One occurs when she realizes that though she has been named for Jeets Bodernasha, Flying Bird, the last fluent speaker of the Mohegan language, the name has lost its meaning. To resurrect the language from written documents, whose words she uses to create theater, they work with a tribal elder. He comes up with new reconstructions of her name. One is Suks-uh-kok and the other is Acho-kayis (a sneeze). Sayet learns the difficulty of reinventing a language that disappeared because no one spoke it for over one hundred years.

As one of the descendants of her tribe, Sayet takes on the mission to honor the Mohegan’s ancestral communication and storytelling and convey it to others through the dramatic arts. To resurrect and maintain their almost vanished legacy of language, culture and history is a formidable task, but she works with Native American theater artists and becomes successful. She is asked to speak and travels extensively. She embodies her name blackbird/flying bird, traveling across the oceans and looking down from a height, always in meditative reflection which she shares in her lyrical monologues.

Sayet is beset with questions on her journey of intellectual and emotional transformation. Along the “Trail of Life,” the Mohegan’s symbol of life’s ups and downs, she re-examines the values of the dominant culture and reassesses its justification for genocide, its mythologies, its violence, and its emphasis that winning is paramount and losing means disappearance and eradication.

Sayet’s realizations occur as she pursues her Ph.D. in London doing research that relates Shakespeare to colonialism. In London, and on her travels lecturing and giving talks, she recognizes the extent to which artificial borders divide human beings against each other to justify genocide and cultural atrocities against people labeled “inferiors” or “the other.”

An interesting segment occurs when Sayet discusses how, in 1735, the Mohegan Sachem Mahomet Weyonomon goes to England to save his tribe from the colonizers’ violence. During his wait to gain an audience with the English king, he contracts smallpox. He dies and his body is buried in a mass grave. Sayet’s discussion of how she serendipitously stumbles upon the Sachem’s gravesite is ironic and poignant. When she sees the large rock that is symbolic of their homeland, which was brought by members of her tribe in 2006 to comfort and honor the Sachem, her revelations further impact her understanding of her legacy.

Another influential moment comes when she visits the British Museum and converses with an academic expressing her opinions about their North American exhibit. During their conversation she learns that the Museum possesses the human remains of about 12,000 people from around the world that it refuses to return. For Sayet the outrage is palpable. Indigenous people are disrespected by not being returned to their land and their ancestors’ burial grounds.

In her rich descriptions, Sayet shares these details and other fascinating experiences as a Native American theater-maker who attempts to decry the bigotry in those she encounters along her journey. Finally, she decides she can no longer pursue her Ph.D. Embracing her identity, she loses interest in studying what has almost destroyed her culture and language. She will pursue teaching in an environment that respects Native American contributions.

Where We Belong is a surprising and unique theatrical experience which draws us in with themes that make us consider our own identity and place in the world. Hao Bai’s ingenious production design, which represents a river, an ocean and serpentine land/winding path cleverly connects the symbols of Sayet’s journey and transformation. Kudos to Asa Benally (costume design), Erik Schilke (composer and sound design), and the entire creative team for their vision.

Where We Belong. Through November 27 at The Public Theater (425 Lafayette Street at Astor Place). www.publictheater.org