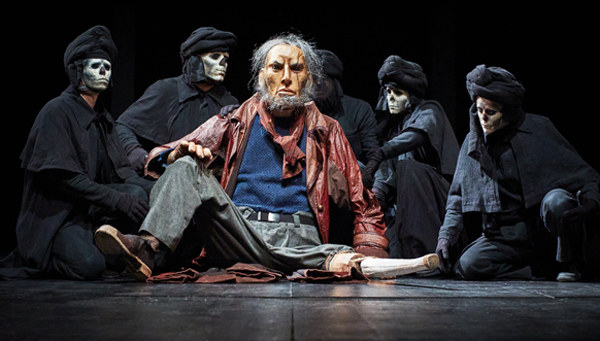 “A puppet is an inanimate object or representational figure animated or manipulated by an entertainer, who is called a puppeteer.”

Those of you who still think of puppets as an arm inside a character’s body or strings overhead (marionettes) are decades behind the times. Size can range from inches to towering near proscenium tops; manipulation might be rods, electronics or invisible puppeteers in black. Characters are created out of paper mache, wood, metal, ceramic-almost anything.

Visionary companies like Norway’s Plexus Polaire represent the best of an evolving genre. Director Yngvild Aspell, whose grandfather was a tattooed sailor, describes Herman Melville’s Moby Dick as “An ancient white whale, a captain steering his ship into destruction, and the inner storms of the human heart…” This production is a feast for imagination and senses alike.

Actors  wearing caped cloaks with skeleton masks, in the style of classic Venetian Mardi Gras and opera  (Costumes- Benjamin Moreau) appear in the guise of ever present death. Sailor puppets (dressed in painterly period clothes) are 6” to life-size and reflect several nationalities.  At first, finesse of manipulation and facial expression has us take them for human. Captain Ahab is sometimes 6’ tall and at others almost twice the size. (Even a group of black clad puppeteers is made unobtrusive.) As in the book, he wears a prosthetic leg made of whalebone. (The actor’s voice is gritty, harsh, fanatic,  just right.)

Whales vary in size from 2’ to 6’ plus. The ship, Pequod, is manifest as a large half circle set of lower ribs also conjuring the belly of the mammal its captain pursues. Expert lighting hides a platform braced between which acts as the ship’s deck. Lighting effectively directs our gaze throughout adding to illusion. At this, Xavier Lescat & Vincent Loubiere are Masters.

Projections (David Lejard-Ruffet) conjure above and undersea storms, sea life, a nautical chart and constellations blanketing all within sight, and the biggest, most credulous whale you’ve ever seen at theater. (Scenography-Elisabeth Holager Lund)

The fatalistic sailor Ishmael signs on “to finish or to start over…There are three types of men, the living, the dead, and those that go to sea.” Alas, this actor, too young and fresh-faced, seemingly outfitted by the GAP, intrudes on the legend with modern take on performance that lacks presence/gravitas. Every time he’s front and center, we’re jerked away from the power of the piece.

We hear the pegleg against wood. Ahab talks to himself on the quarterdeck, “If I follow the tides and winds and whale food…WHERE’S MOBY DICK?!” A prophecy has foretold the monomaniacal captain won’t die until certain events come to pass. Electric bass guitar provides an ominous hum. Upright bowed bass adds undertow. We hear a haunting woman’s voice.  “…and this lads is what you have shipped for!” Ahab shouts proffering his leg. The captain rails and paces. At one point we see his crew in hammocks below, each face startling in its detail. When a sailor raises his pipe, smoke emerges. Ishmael introduces the rough, beleaguered group in voiceover.

Enormous waterspouts appear. The ship goes after several whales. We see a model Pequod tossed by waves, harpoons from small boats impaling the beasts. One is shown peeled and cut up for oil and blubber. The audience palpably winces. Ahab puts the crew in more and more danger. First mate Starbuck stands below with a gun “kill one to save thirty?” but finds he can’t murder Ahab. The Polynesian Queequeg (also two sizes of puppet), Ishmael’s only friend, scales a mast and ropes as if flesh and blood. A scene featuring the two with arms in buckets of sperm reflects their bond. Sick, the native asks that a coffin be made then rises from it.

A typhoon hits the ship. The sailor who steers lifts off the ground horizontally now left, now right. Men perish. The electric bass wails. Drums that whoshed and whispered now pound. Massive lightening feels electric. Sharks come after what’s left of whale corpses. Queequeg and Ishmael fight them. “There’s nothing like the perils of whaling to breathe desperado philosophy,” Ishmael says without needed resonance. We hear collective moaning like monks and see a young stowaway get rescued. The boy has changed. “The awful lonesomeness is intolerable…his shipmates called him mad,” Ishmael narrates. Aspects of the prophecy are fulfilled.

The three musicians pass under deck and appear above as impassioned Ahab goes after his nemesis. Waves and timpani crash. Men shout and wail. Text is intoned by a woman, but we can’t hear it clearly. Oddly, the production doesn’t show Ahab caught in a harpoon line and hurled out of his boat to his death. All are lost but Ishmael who clutches the unused coffin.

It’s extraordinary. The one hour 25 minutes without intermission flashes in a blink. It’s hard to catch one’s breath.