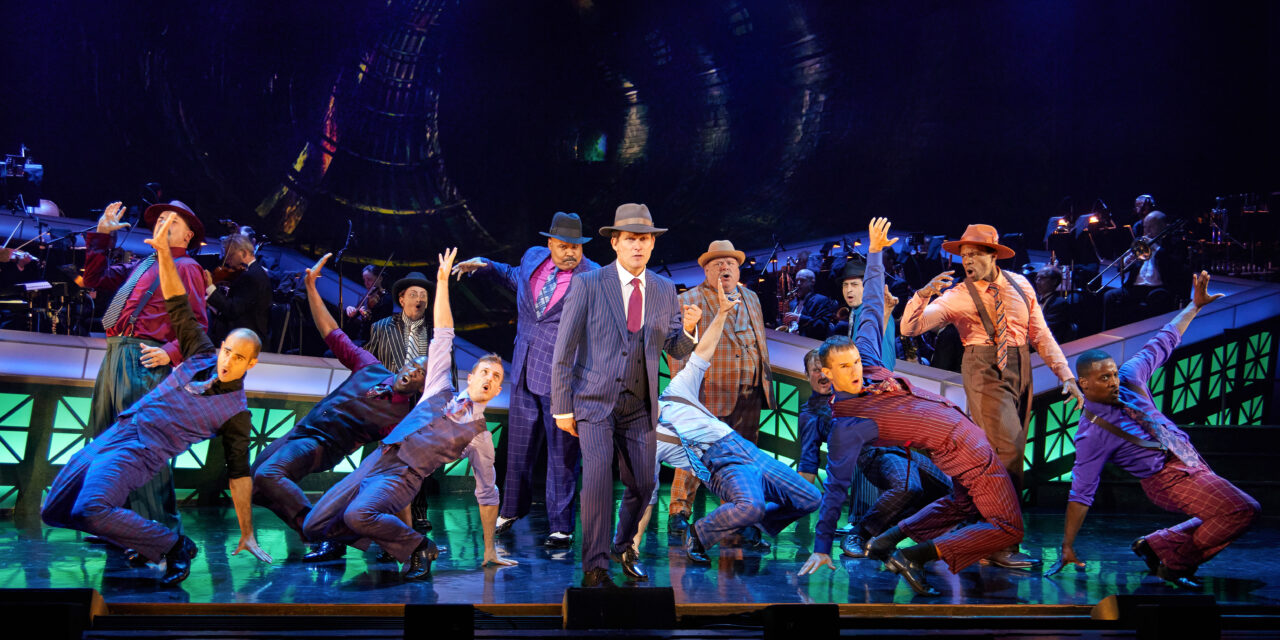 Even if there haven’t been a million Broadway shows over the last hundred years, permit me the hyperbole to state that Guys and Dolls is one in a million. A rarity in that it played like a hit from its first out of town performance (The Producers and The Lion King are its modern equivalents), it personifies the Golden Age of the American musical by way of Frank Loesser’s tuneful score and lyrics that even Stephen Sondheim envied, citing Loesser in his book Finishing the Hat as “a master of conversational lyrics.” Guys and Dolls is also considered to have a perfect book, because in Abe Burrows’* adaptation of Damon Runyon’s classic stories of the gambling denizens of Depression era Times Square, his invention of a few new characters and situations along the way literally made the stories sing. Happily, there’s a quick window to catch a wonderful new stage production of this 1950 masterpiece in Washington, D.C. at the Eisenhower Theatre at the Kennedy Center. But hurry: it closes this weekend.

Rehearsed in just ten days for only ten performances, the Kennedy Center’s “Broadway Center Stage” program brashly presents these annual summer stock-style versions of great musicals, with previous entries such as Norm Lewis in The Music Man in 2019, and this February’s Sunset Boulevard with Stephanie J. Block, in addition to Kiss of the Spider Woman coming up in May. This is my first experience at any of these, but with a cast like the one Guys and Dolls is blessed with, the gambling odds were pretty strong it plays out the winner that it is.

Consider the talent on board: Tony Award winner Jessie Mueller (2014’s Beautiful) as Miss Adelaide of the perpetual psychosomatic cold, Tony Award winner James Monroe Iglehart (2014’s Aladdin) as Nathan Detroit, the dyspeptic impresario of the oldest established, permanent floating crap game in New York; Steven Pasquale (most recently John Wilkes Booth in Assassins at NY’s Classic Stage Company) as the cooler-than-cool Sky Masterson, and Phillipa Soo (Tony nominated as Eliza in 2015’s Hamilton) as Sarah Brown, the Mission doll who can pack a punch. With a foursome like this, all of whom have voices that produce goose bumps, under Marc Bruni’s confident direction, this really is a production that demands a chance at packing them in where the show belongs: on Broadway.

In his program notes, Bruni writes that he saw the famed revival that Jerry Zaks directed thirty years ago (on a high school band trip no less), labeling it “perfect.” He’s right not only about that, but also when he states that a new generation is ready for Guys and Dolls again. Testimony to the power of it as a theatre piece is that its seventy year old jokes play as if written yesterday (even if people don’t know who Guy Lombardo is anymore). Bruni eschews the need for any sort of “concept” production (his italics) and is good on his word. Staged very much like most of the City Center Encores productions, scenic designer Paul Tate Depoo III’s uses projections to give a sense of space and scope and dominates the stage with two large boxes (shaped and angled like a pair of dice) that take up much of the playing area where the 22-piece orchestra is situated. To hear Frank Loesser’s incredible score in this way is close to heaven on earth, not to mention the rich Michael Starobin’s arrangements (from the 1992 production), conducted confidently by the show’s musical director, Kevin Stites. And without a great deal of choreography, Denis Jones managed to save it all up for the “Crapshooter’s Ballet,” which was a standout.

Jessie Mueller’s Miss Adelaide is one fine doll, singing gloriously and reveling in the comedy of the role. My only wish is that she slowed down from time to time, as she delivered her performance like an express train barely making any local stops. Speaking very fast, a few choice lines were definitely missed. James Monroe Iglehart seemed to suffer somewhat from the limited rehearsal time, but he grew more and more assured as the evening went on. His heartfelt “Sue Me” went a long way towards capturing the audience’s heart. The real-life married couple of Steven Pasquale and Phillipa Soo had all the requisite chemistry (yeah, chemistry) aided by voices that are, frankly, to die for. I adored that the choice was made for Soo to use her high soprano range on the two love ballads making “If I Were a Bell” free and easy and a comedic delight. With only a few strokes, the role of Sarah Brown is so well-conceived, it’s a pleasure when an actress like Soo recognizes that and runs with it. Pasquale is such a self-possessed singer that he made Sky’s musical numbers perhaps the best I’ve ever heard. He also had the kind of swagger that made it feel like Jimmy Cagney had come back to life with the added bonus of the sex appeal of Paul Newman.

The supporting players who stand out are Matthew Saldivar’s Benny Southstreet, whose squirrelly and original take on the character was hilarious; Jacqueline Antarmarian’s Matilda Cartwright, offering a wholly believable person, even when surrounded by cartoons; Fred Applegate’s warm and gregarious Arvide, lovingly warbling “More I Cannot Wish You” and Jimmy Smagula’s Harry the Horse, properly channeling Sheldon Leonard (who played the part in the film version). It’s disappointing to report that Rachel Dratch (so funny in last season’s POTUS)couldn’t quite pull off Big Julie. Usually played by a giant of a man, having a tiny woman in a man’s suit is a funny sight gag, but left the role bereft of its proper menace. Sadly, it was not a practical choice that serves the play.

Saving my favorite for last, Kevin Chamberlin, a Broadway veteran and three-time Tony nominee, is a Nicely-Nicely Johnson for the ages. Perfectly cast and singing in three of the score’s most famous songs, “Fugue for Tinhorns,” the title tune, and “Sit Down You’re Rockin’ the Boat,” feels like the warm embrace of someone whose only purpose is to make you feel better. A large man, costumed in a color and pattern that makes him stand out even more than usual, he folded up the show and tucked it in his pocket during “Sit Down,” one of the greatest eleven-o’clock numbers of all time. People were standing and screaming when it was over.

Though done on a virtual shoestring, this Guys and Dolls is a rich entertainment, true to its roots as the be-all and end-all of American musicals. I can’t state it better than John Lahr, former critic at the New Yorker, who called the show “so jubilant, so eloquent, so pitch-perfect.”

* Yes, the writer Jo Swerling gets a contractual co-credit, but facts are facts: it’s all Burrows.

Guys and Dolls is playing at the Eisenhower Theatre at the Kennedy Center in Washington, D.C. through Sunday October 16th. For further information, please visit https://www.kennedy-center.org/whats-on/explore-by-genre/theater/2022-2023/guys-and-dolls/