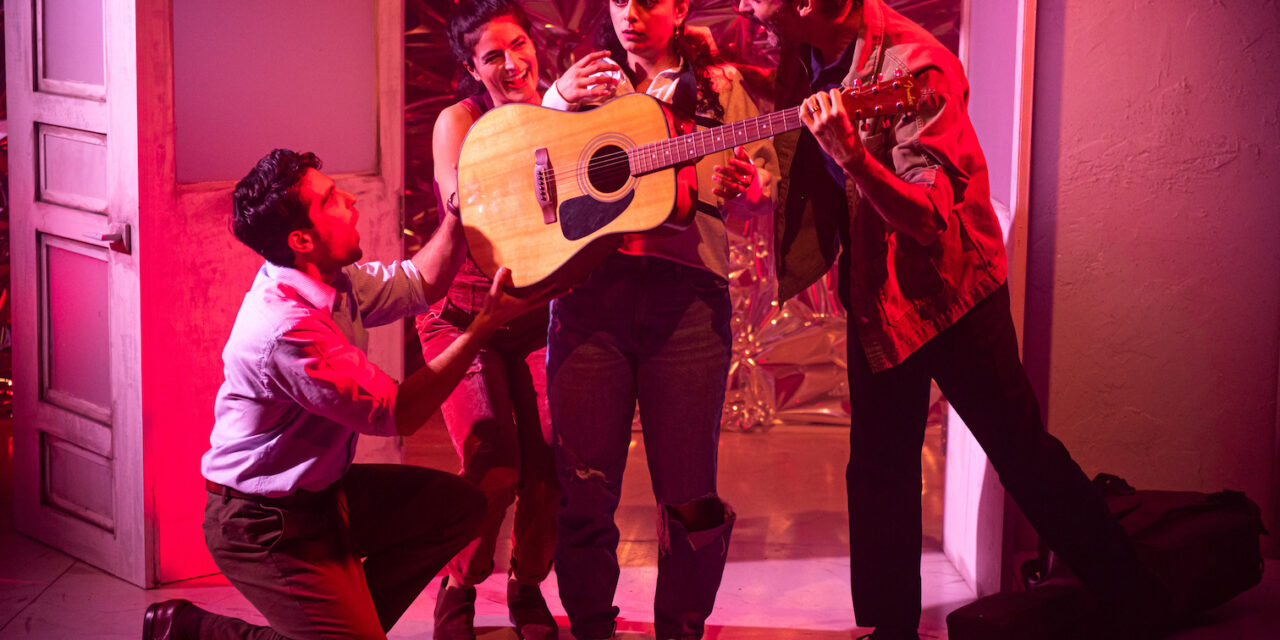 The nation of Turkey is a rarity on the American stage. HOUND DOG (spelled in all caps), Melis Aker’s sporadically appealing but frequently confusing new play, with music and lyrics by Aker and the Lazours,  brothers Daniel and Patrick, redresses the situation somewhat by taking place largely in Ankara, Turkey’s second-largest city. Sadly, however, aside from our learning that the country is repressive, and that one must be careful not to be spied on, very little of Turkish culture or even politics seeps through. You might almost think you were in America (which may be part of the point).

Hound Dog, a co-production of Ars Nova and PlayCo, deals with the strained relationship between Baba (Laith Nakli), an Elvis-loving father, and his expat musician daughter, Hound Dog (Ellena Eshraghi). Set against a background critical of cultural appropriation, the play could take place in almost any authoritarian country with a potentially fading culture.

Aker, from Turkey (not Southern California, as in earlier version of this review), suggests in her stage directions that the characters are “alternate” versions of her and her family. The central character, a singer-guitarist in her mid-to-late 20s is named Hound Dog, although those words are spoken only once, more as a label than a name; in fact, the stage directions are written in the first person (“I” this, “I” that), as if the writer were the character. And if you expect to hear Elvis’s “Hound Dog,” you’ll have to listen very closely if you’re going to pick up any musical reminders of it.

A small number of songs are performed; four are by Ms. Aker, three by the Lazours, and one by both. Most are agreeably melodic, sounding like a cross between blues and country, albeit with vaguely allusive lyrics. All are well sung, mainly by svelte vocalist Sahar Milani. I suspect there are Turkish influences, but my untrained ear can’t say for sure. Presumably written by Hound Dog, most of the numbers aren’t integrated into the action as in a conventional musical, but seem more like interpolations intended to highlight emotional states, like Baba’s mourning for his wife in “There She Goes.” The songs are presumably Hound Dog’s creations, as she’s a Harvard graduate with a degree in musicology; in fact, she’s so talented she’s been accepted by the Royal Academy of Music—she’s just not so keen to go.

The highly episodic plot concerns the return to Ankara from the U.S. of Hound Dog when she learns that her widowed father, Baba, got drunk and broke his foot. Baba is an alcoholic, atheistic, heavily bearded, would-be Elvis impersonator grieving over the loss of his wife a year earlier. His goal, for which he’s secretly sewing an Elvis costume, is to go to Graceland; this disturbs his daughter, who’s upset about such Western fetishism. Also, Hound Dog didn’t come home for her mother’s funeral, for which she probably feels guilty.

Her best friend, the queer, weed-smoking Ayse (Olivia AbiAssi), is a wannabe musician who emulates, with over-the-top energy, what she appears to deem the lingo and behavior of hip Americans. Ayse’s unhappy about life in the “shit hole” of Ankara, where she sells used appliances. She envies her friend’s success, hoping they’ll one day have a band (maybe called “The Flying Sultans”), so she takes it personally when Hound Dog says she’ll reject her acceptance to the Royal Academy. Hound Dog appears to think she should turn her attention to Turkish music, a brief, lullaby-like sample of which has been heard in snatches, and which she sings at the end.

It’s apparent that Turkish culture is in danger of being washed away in the tide of egregious Westernization, although the subject is only thinly discussed. Hound Dog mentions having taken a course from a “crazy professor” in “Decolonizing Sound in the Uncanny Valley”—have fun parsing that—but what she learned is vaguely expressed, other than that her dad’s avidity for Presley’s music is problematic. The theme of cultural appropriation also involves a handsome American expat, Mr. Callahan (Matt Magnuson), her high school music teacher, to whom Hound Dog is attracted.

There’s also a local man, Yusuf (Jonathan Raviv), known as the Music Man, a kindly musician friend of Baba’s, who disposes of the neighborhood’s trash, and is a ready source of advice. Several minor characters, including a shrink named Dr. Leedledicks, appear in dreamlike sequences and are performed by the principals—although not specifically credited as such in the (online) program. I guess you could say the name Dr. Leedledicks is indicative of the show’s frequent attempts at humor.

The fast-paced action, energetically directed by Machel Ross, occurs before Frank J. Oliva’s two-story backdrop of tall, narrow archways, into which are placed upper and lower sets of double doors with translucent panes, behind which shadowy silhouettes of people sometimes appear. Small scenic units, like a mattress, emerge when needed through the lower doors (sometimes brought on by headset-wearing stagehands—ugh!). The opened upper doors reveal things like a small band, when the locale moves to a nightclub whose name provides a big reveal.

Tuçe Yasak’s lighting is pretty, especially when he splashes a mosaic of bright colors against the upstage wall. And Qween Jean’s costumes satisfy the requirements of everyday clothing, with some imagination added for the surrealistic moments; of course, there’s also the clichéd Elvis outfit.

HOUND DOG’s dialogue is entirely in profanity-laced, colloquial English, regardless of whether English or Turkish is being spoken. Despite some obvious malapropisms, the barely noticeable and pervasively inconsistent accents are of no help in telling us what language is being spoken, just as the often choppy, hallucinatory action—which moves forward and backward in time—mostly fails to illuminate where or when the scenes are set. These head-scratchingly surrealistic scenes are the play’s downfall.

There’s much to appreciate in each performance and in several of the songs, but many of this show’s 90 minutes fail to register strongly enough on the scales of humor, emotion, lucidity, or even sociology. It’s good, however, to see something, even if tepidly done, about a rarely represented culture on the stage. That alone should prevent anyone from calling Hound Dog a turkey.