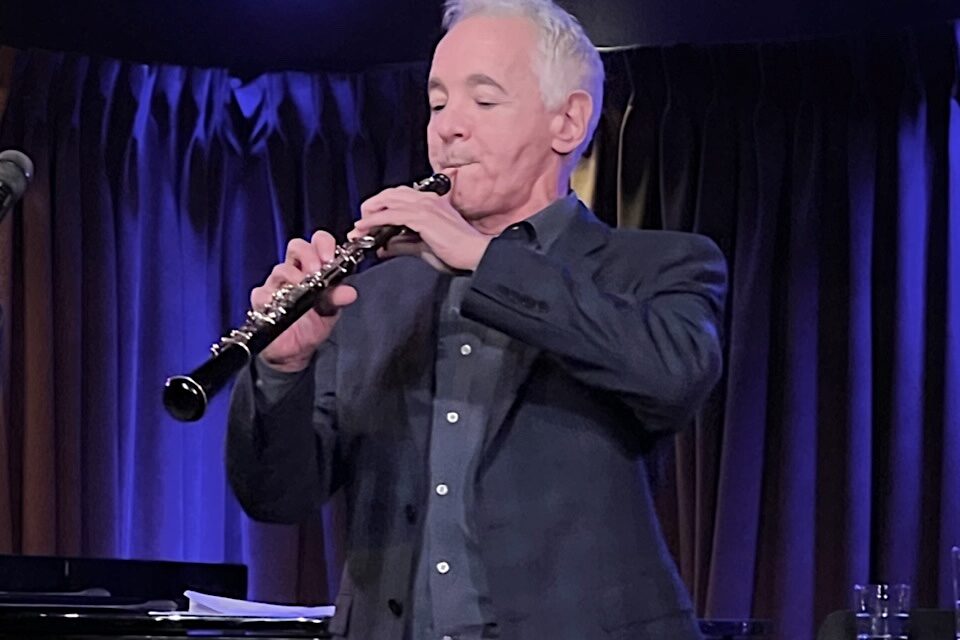 Jason Graae (think foie gras and you can’t go wrong) has finally returned to the New York cabaret scene for the first time in years (The Green Room 42 at the Yotel, Friday 10/28 and Sunday 10/30) and the city is officially a happier place. As the winner of four Bistro Awards and a N.Y. Nightlife Award, his cabaret credentials are impeccable, as are his years of experience in Broadway musicals and even opera. He is a clown extraordinaire, a talented oboist, and an inventive singer of songs (there are CD’s to prove it) and resembles nothing less than a throwback to an era long past (he would have had an amazing career in vaudeville). Alongside the wonderful Gerald Sternbach, his longtime musical director and accompanist, the pair showcased Graae’s “Graaetest Hits” (the sequel, no less) that was a delight from start to finish.

Forever youthful, he is lithe and ready to pounce like a tiger with a comedic comeback or a saucy aside. He worked the audience like the pro that he is and even played to those at home who paid a modest fee to watch a live feed of the performance (his Sunday show will be live streamed as well). In his opening remarks, he was ready to “sing the songs that got me here today – the Yotel,” and included tales of his long showbiz life dropping names along the way like Jerry Herman and Stephen Sondheim. Self-deprecation and immodesty suit Graae in equal measure and he plumbs the depths of his repertoire (dare I say bag of tricks?) with aplomb.

His song choices ran the gamut from hilarity to poignance. Perhaps the funniest bit was his “Just a Giglio” with a mock French accent and self-accompaniment on the oboe. Like Jack Benny and his violin or Victor Borge and his piano, Graae is in that great tradition of comedians who are expert as musicians but can’t resist the opportunity to goof off. Even the promise of some lively dancing on Jerry Herman’s “Tap Your Troubles Away” results in the rug being pulled. Prop happy and slightly insane, Graae forces the audience to keep on its toes.

There were many musical highlights from among Broadway’s greatest composers such as Cy Coleman’s “You Fascinate Me So,” Charles Strouse’s “You’re Never Fully Dressed Without a Smile,” Stephen Schwartz’s “Popular” and Richard Rodgers’ “Bewitched.” Constantly toying with  our expectations, Graae is prone to say things along the lines of “George Gershwin’s influence on me has been a profound one, so here’s a song by Alan Sherman.”

Extra praise is due Gerald Sternbach’s superb piano playing, working in subtle references that were playful and delightful for those paying strict attention. During “I’m Calm,” one of Sondheim’s earliest ditties from A Funny Thing Happened on the Way to the Forum, Sternbach worked in some of the more mature Sondheim in his underscoring, and Charlie Chaplin’s “Smile” found its way into “You’re Never Fully Dressed Without a Smile.” Just great.

Graae could easily fill an evening with anecdotes and stories. The ones involving Sondheim and the faint praise Graae would receive from “the Master” every time their paths crossed post-performance were delivered in a delectably wry fashion. “Nice job, Jason,” was all he ever got over the course of many years, which Graae has never been sure had their basis in praise or passive-aggressiveness.

Graae’s mix of two great songs about love and companionship, William Finn’s “What More Can I Say?” and John Bucchino’s “Married” was the evening’s crowning achievement, sung in beautiful style. And any cabaret show that includes the belting out of Charles Strouse and Lee Adams’s “Applause” is fine by me. We were even treated to a clever oboe rendition of Jack Keller’s classic theme song to TV’s Bewitched intermingled with Graae crooning the Rodgers and Hart tune of the same name.

If you’re reading this in time to catch Sunday’s pre-Halloween show at The Green Room 42, Jason Graae is ready to entertain (as always). Tickets are available at their website https://thegreenroom42.venuetix.com.

Jason Graae’s “Graaetest Hits: The Sequel” is playing at The Green Room 42 in the Yotel 570 Tenth Avenue, Fourth Floor, NYC.