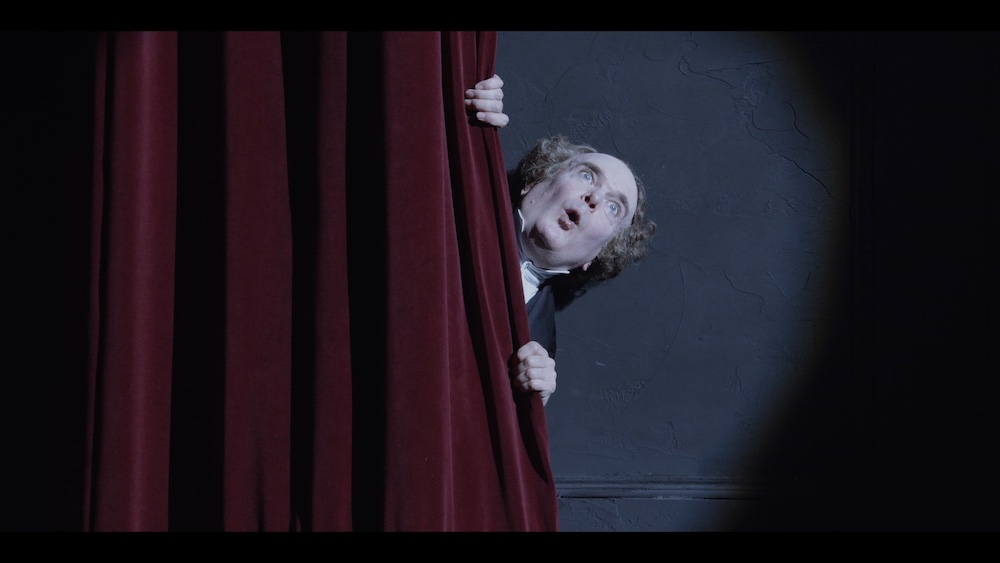 Who doesn’t love a good old-fashioned ghost story? Certainly the early Victorians did, and so have generations that followed who continue to make Charles Dickens’ A Christmas Carol. In Prose. Being a Ghost Story of Christmas, better known as A Christmas Carol, a Christmas-time favorite. Not the least of these folks is Tony Award winner Jefferson Mays, the astonishing actor who has created a one-man version that thrills, awes, astounds and otherwise amazes at every possible turn.

You know the story: Ebenezer Scrooge is a horrid piece of work, a miser without a heart whose stone cold soul is transformed over the course of a supernaturally charged night. It begins with the appearance of the ghost of his partner, Jacob Marley. Marley, dead seven years, drags the karmic chains that his miserly life forged. He’s compelled to walk the earth so, but has it in him now to warn Scrooge, heralding the visitation of three spirits—of Christmas Past, Present and Yet to Come—in the hopes of saving him from a similar fate. Indeed, when they’ve finished with Scrooge, he’s a new man. This is the redemptive tale that since its debut in 1843 has been endlessly adapted in every conceivable way and configuration, including one-man shows—starting with Dickens himself. A Christmas Carol was such a hit when it was published that the author was compelled to perform public readings of his work with a manuscript he’d edited down from the novella.

But even with this heady legacy, you ain’t seen nothing yet. Mays possesses every inch of the Nederlander Theatre stage in an elegant choreography of movement, playing 50 characters with whirlwind precision. Under the direction of two-time Tony Award nominee Michael Arden, Mays’ exquisite timing moves the unfolding of the story breezily forward. There are enhancements, of course; the technology of stagecraft has allowed for special effects galore—and they’re pretty fabulous. Onerous, haunting atonal music plays the audience in. A dark stage reveals an open casket in dim light. Suddenly, simultaneously, there’s the abrupt slam of the coffin lid being shut and complete darkness. The Mourner’s voice—the narrator—is heard. “Old Marley was as dead as a doornail,” he intones. A match is struck; The Mourner’s face glows in the pinpoint of light. “This must be distinctly understood or nothing wonderful can come of the story I am going to relate,” he continues. And off we go into a proper ghost story, where atmosphere is everything. Yet, even without the theatrics, Mays never yields ground as the anchoring core of the production. There’s precedent in that ability. The actor won a 2004 Tony for his tour-de-force turn in Doug Wright’s I Am My Own Wife, performing fortycharacters without bells and whistles.

The beauty of Mays is that he cannily excavates the genius of Dickens that’s missing in many adaptations of the novella. When the author wrote A Christmas Carol, England was in a transitional state, on the threshold of the industrial age and reexamining values. But beyond those issues of the day, universal truths prevail. These are the elements that Mays is able to extract and deliver with gravitas. And what is so often taken for granted or glossed over—Scrooge’s awe-inspiring spiritual transformation—is transmuted into a process in which the depth of it, the sheer power of the experience, is made profoundly clear. There’s also absolute delight in the compare-and-contrast of Scrooge’s miserable existence with the joy of his mentor Fezziwig’s exuberant Christmas party, nephew Fred’s happy holiday revels and the family dynamic of the Cratchits, where Scrooge’s ill-treated clerk, Bob, keeps the spirit of Christmas with his wife, Tiny Tim and the rest of his loving brood. There is, in short, a bountiful range of human emotion in A Christmas Carol, and Mays captures it all. He’s also wonderfully expert at hitting comic moments as well as the frightful ones. His portrayal of Marley’s ghost, for instance, is truly terrifying. By the time we arrive at the climax of the visit of Christmas Yet to Come, attention has been paid. The Spirit of Christmas Yet to Come is portrayed by the fearfully shadowy Danny Gardner, in puppetry-inspired costume, who’s first seen spectrally upstage before making a haunting sweep downstage, crossing into the wings.

This new version of A Christmas Carol was adapted by Mays and his wife, actor Susan Lyons, along with Arden, from an idea conceived by Arden and Laffrey. The source material is Dickens own performance reading script. Charles Dickens’ A Christmas Carol had a 2018 debut in Los Angeles at the Geffen Playhouse. In 2020, unable to perform live because of the pandemic, a version of the production was filmed at the United Palace in Upper Manhattan.

Should Mays be haunted by the ghost of Charles Dickens, it would certainly be with approval and not warning. Through the 179 years of its popularity, yielding literally hundreds of adaptations, Jefferson Mays makes this classic tale seem fresh and new, with a timeless ending of hope and transformation that never grows old.