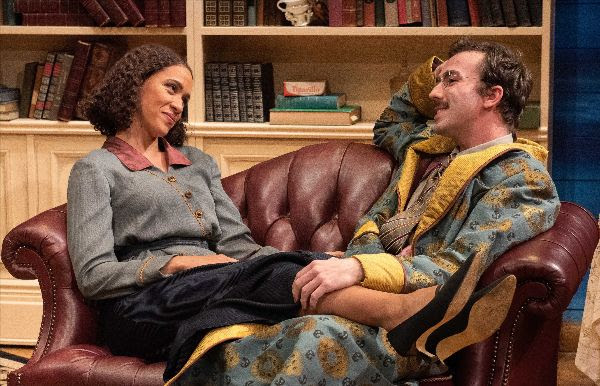 Imagine a teenage playwright beginning his career by addressing the sacrifices an accomplished woman must make when she weds a less-talented partner. Add societal expectations of married women, the couple’s stated rejection of prescribed roles, an empathic woman married to an immature boor, and make the play both entertaining and dramatic. The result is a play penned by a budding playwright who rose to best these challenges. Noel Coward’s The Rat Trap is an early glimpse of the playwright’s potential for brilliance.

The Rat Trap playing now through December 10 at NY Center Stage II—is directed by Alexander Lass and presented by the Mint Theater Company. Both the play and Mint Theater Company have interesting backstories and focus. The play, written by an 18-year-old Coward, had a rocky start to the stage. Originally intended for London’s West End, it first appeared in lesser venues and was further hampered due to the death of actress Meggie Albanesi, a close friend of the author and role model for the lead character. The play appeared sporadically during the 1920s but was increasingly overlooked due to the emergence of Coward’s other more successful (and popular) plays of the period. Fortunately, the Mint Theater Company has made it its mission to revive lost or overlooked plays. Their presentation of The Rat Trap certainly achieves its mission with this excellent revival.

The story is set in the 1920s and includes references to the attendant social and artistic beliefs of the times, with a strong dose of class privilege. The locus of the play, however, lies in the dynamics of a marriage under stress due to male insecurity. We meet the leads, Sheila (Sarin Monae West) and Keld (James Evans), both writers, as they are about to wed. Almost immediately, impending problems are noted by the couple’s friend, Olive (a delightful Elisabeth Gray), who predicts: “Marriage is a lottery.” She fears that Sheila will lower her standards to meet Keld’s insecurity and lesser talent. The play then goes on to confirm what Olive has feared and foretold.

In spite of his protesting otherwise, Keld revels in his arrogance, dominance and selfishness. When reading his play’s reviews, he stops when actors’ performances are mentioned. They don’t hold his interest. He rails against laundry with oversized outrage. And as a last resort to maintain his dominance over his wife, he sputters with anger and violence. Shelia makes choices throughout the ordeal, as she tries to reorient the relationship, but is left with only one choice: to free herself when she discovers Keld’s betrayal.

Besides the sage Olive, other characters enter the play’s marital orbit, including a breezy couple that is happy to share in Keld’s success, and an actress who plays to his insecurity with unmitigated flattery. Sheila’s maid (Cynthia Mace, providing subtle comic relief merely by her gait and comportment) appears as an ongoing reminder of what an ass/blowhard/jerk Keld is. Despite all Keld’s bluster, and mighty contributions from the other characters, Sheila is nonethless the center of the orbit and the play’s strength. “Olive warned me and it’s come true; we’re like two rats in a trap, fighting, fighting, fighting.”

Although there is tension throughout the play, there is also trademark Coward humor and wit. All the players project a superb ease and control of their characters. And each character captures the essence of their role, whether sincere, intelligent, comic, preposterous, fawning, selfish, driven, snarky, conflicted or boorish. They are all always entertaining and insightful—it’s an excellent cast and well-acted.

The staging was attractive and efficient given the theater space. Of note, the production featured two particularly clever directorial and design decisions. During the rush to change Act I’s to II’s settings, the character Edmund (Ramzi Khalaf) sings the lively Coward song “Forbidden Fruit.” This was a good choice as a reminder of Coward’s talent as a songwriter as well as a brief reprieve from the looming marital unpleasantness. A deft move by director Alexander Lass.

The portraits hung in the Maxwell’s home were an effective design choice (set by Vicki R. Davis). The first is a portrait of a very young Coward. The second, of the married couple, shows Keld in the foreground with Sheila in the background. It is an odd arrangement for a married couple, usually shown side by side, as equals. No doubt Keld commissioned the portrait, presenting his vision of the marriage.

A thoughtful revival of an overlooked and intriguing work, an evening in The Rat Trap is time well spent.