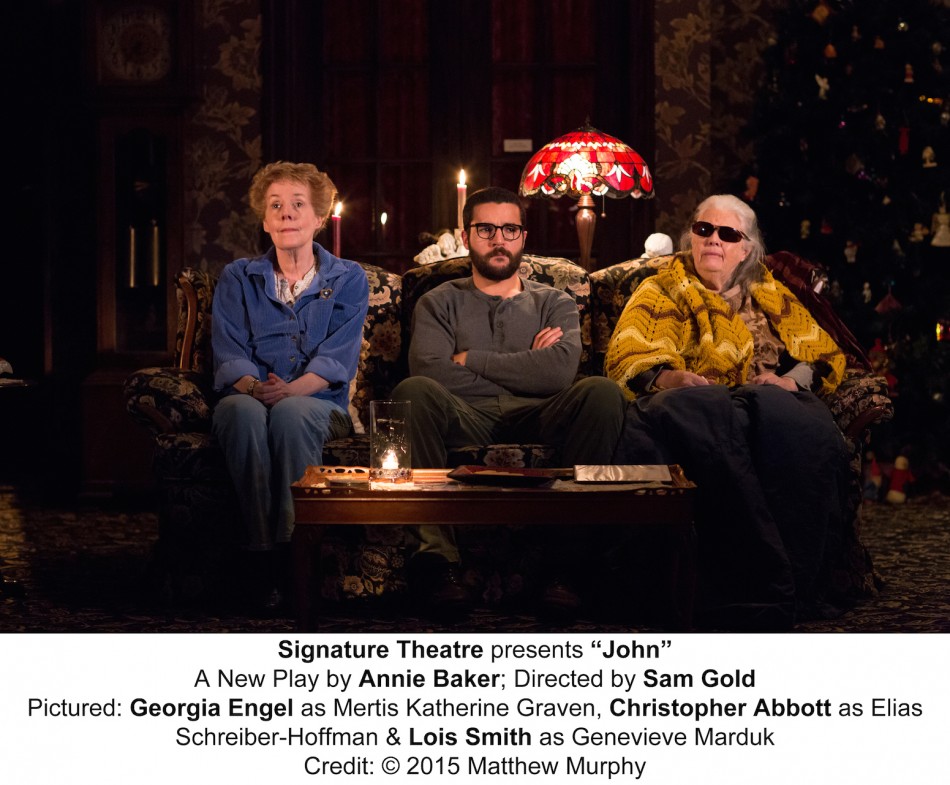 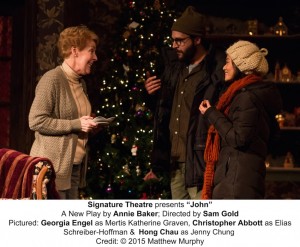 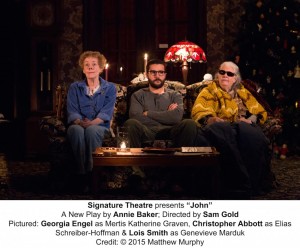 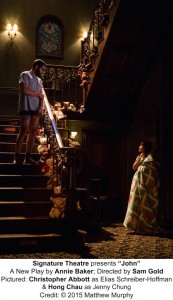 Playwright Annie Baker’s penchant for examining life’s tiny moments, in all their monotonous, inevitable glory, continues to hold sway in her latest at the Signature Theatre. Simply called John, the play chronicles two days at a bed and breakfast in Gettysburg, Pennsylvania.

Baker’s studied, leisurely approach presents itself right from the start, as Mertis (Georgia Engel) opens the curtain, hung like a very high shower curtain, for the show to begin. She walks across the stage at a measured pace, neither hurrying or dawdling. She will open and close the curtain before and after each of the play’s three acts.

Mertis runs the B&B. A young couple, Elias (Christopher Abbott) and Jenny (Hong Chau), are its only guests. Genevieve (Lois Smith) is a friend and neighbor who stops by.

The play begins staidly. Elias and Jenny arrive. Mertis welcomes them. Everyone is polite, and the guests are shown to their room. Not much for an hour of stage time. Yet the characters, while low-key, are quietly beguiling: we want to know them better, even if they can be just a tad tedious from time to time. Welcome to the world of Annie Baker.

Best known as Georgette for her years on The Mary Tyler Moore Show, Engel could have taken the easy route and simply reincarnated Georgette forty years later. Instead, she incorporates bits and pieces of Georgette into a distinctly new and different character. Mertis and Georgette have similarities, to be sure, and there’s more than a hint of Georgette in Mertis’s voice. But it’s not Georgette’s who speaks; it’s Mertis.

The second act begins with some fire, courtesy of the indomitable Lois Smith. Smith infuses a breath of fresh air into a play you didn’t even know needed it. She plays Genevieve, Mertis’s outspoken friend. She talks to Mertis and Jenny about when she went crazy because her husband had possessed her. Smith relates Genevieve’s story straightforwardly and with conviction. She’s focused and funny.

Smith also closes the second act, when we think it’s already closed. She breaks through the curtain to speak directly to the audience, after some had already started their flight to restrooms and cigarettes. She promises to take less than five minutes. She speaks once again about her madness, which came to her in seven stages, several of which featured scorpions. She finishes within the allotted five minutes.

Meanwhile, the fissures in Jenny’s and Elias’s relationship become more pronounced. Jenny keeps getting texts and calls, which she says are from her sister. At one point, she seems to admit to Elias that she had an affair but claims it’s in the past.

Director Sam Gold sets a perfect pace for the piece, which doesn’t mean it’s not sometimes maddeningly slow. But Gold finds minor variations in tempo to match the ebb and flow of the Baker’s work.

Baker’s writing is eloquent in its ordinariness. Mertis and Genevieve, sage from lifetimes of experience, preside over John like gods, while Elias and Jenny try to figure out what to do with each other.

Set designer Mimi Lien’s early-American kitchen and parlor speak volumes with their clutter. And lighting designer, Mark Barton never lets us lose our way in the dark. This is noteworthy because much of the play is done in semi-darkness, with only a lamp or two creating dappled playing spaces.

Abbot and Chau are both effective as a couple on the verge of dissolution. Their grief, fear, and relief are striking, skewing more to Elias than Jenny. Engel gives Mertis an underpinning of depth despite her deceptively shallow surface gloss. Smith is fabulous.

John is not for everyone – if you like your plays plotty and energetic, go no further. John doesn’t really say much or travel very far. But its glimpses of humanity in its natural habitat more than compensate for its sometimes static feel. 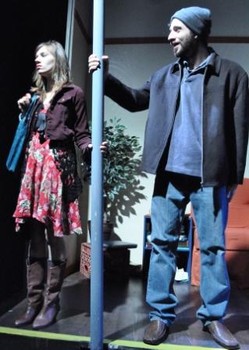