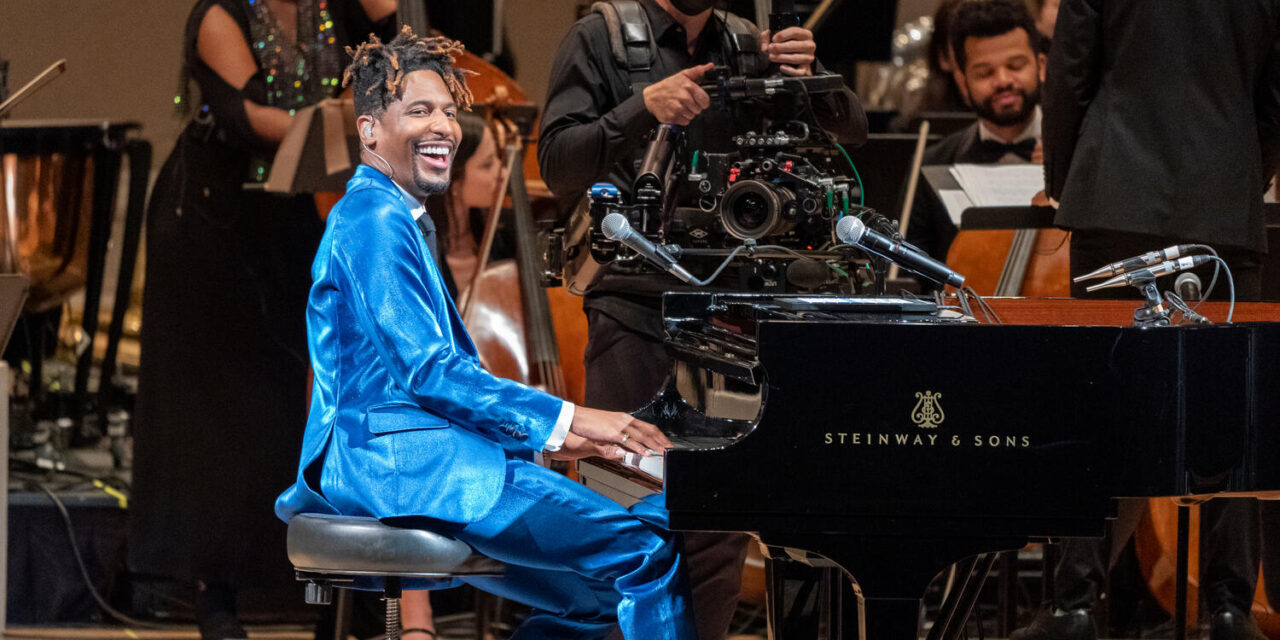 The stage was set on September 22, 2023 at Carnegie Hall for the one-night only premiere of composer/performer Jon Batiste’s “American Symphony,” self-described as “a large-scale, genre-melding symphonic work.” No hyperbole there, as it was definitely all that — and more. Though many might have been first introduced to him in 2015 as musical director of Late Night with Stephen Colbert, he has since become a multiple threat as a performing and composing artist. With his eleven Grammy nominations (resulting in five wins) just this past year, as well as his having won an Academy Award in 2021 for the score to Pixar’s Soul, transforming him into a worldwide phenomenon.

Calling his score for “American Symphony” a “living document,” and using the United States Constitution as a reference point, Batiste’s self-described goal is to “explore the complexity and diversity of American life and history.” No small task, but if anyone is up to it, it’s Batiste.

Entering from the back of the hall and dressed in an electric blue suit, Batiste resembled nothing less than a prize fighter making his way slowly to the boxing ring amidst his fans’ adoration. Once on stage, he bathed in the applause from an audience entirely on their feet, soaking it in like rays of sunshine. And the man hadn’t done anything yet.

What followed was unique, powerful and three-and-a-half years in the making. Composed in five distinct movements, it contains in-the-moment feelings of improvisation that Batiste has stated are, in fact, composed. To his credit, Batiste offers his musicians and singers’ numerous chances to shine repeatedly. Among others, an operatic soprano, a guitarist with fingers as fast as lightning, a saxophonist of insane abilities, as well as Native American drummers who also vocalized to their rhythmic pounding. In Batiste’s program notes, he writes that “the rhythm section expresses the range of African diasporic traditional drumming, including the permutations of it found in Caribbean, New Orleans [his native city], Brazil, Yoruba, Haitian Creole, and contemporary avant-garde jazz traditions.”

Sixty-one musicians were onstage (by my count). Included in that number was a digital orchestral section that Batiste strolled over and visited from time to time making use of modular and analog synthesizers. There was a computer atop his centerstage Steinway that he also played, which added a discordant and arresting aspect to the piece. His wandering about, checking in with his musicians throughout the entirety of the symphony, sometimes taking over on drums or keyboards or other instruments, was so bold it brought Leonard Bernstein to mind as the only other composer/conductor I could think of with the audacity and talent to pull off such a stunt utilizing similar showmanship.

Considering this critic’s lack of bona fides to seriously analyze such a forceful demonstration of musicianship, it felt in line with the experimental nature of Batiste’s opus to offer an appraisal a little on the unorthodox side. Having jotted down my responses in a semi-subconscious way, I thought it might be effective, as well as unusual, to offer them verbatim. Since I wrote them extemporaneously while the music washed over me, here then are random thoughts typed from my notes in the order of how things flowed:

A mournful slide trombone opens the symphony… four speaker/singers upstage left accompany the tune…the conductor [Glen Alexander II] shares duties from time to time with Batiste… sounds are reminiscent of a storm at sea with waves crashing… I’m hearing the Christmas song “Greensleeves” … someone is now chanting, but the words are impossible to decipher… Later, someone is incanting the phrase “We shall overcome” … the driving force of the music playing now feels like something out of a James Bond film… now a Caribbean lilt takes over… the audience is being asked to clap in rhythm and are all obliging… a police siren has now been incorporated into the work… the piano is so discordant as to seem as if a child were pounding on it… the cacophony of sound resembles nothing less than a 1940s horror film.. Bernard Hermann’s theme from Taxi Driver is being emulated… we’ve most assuredly arrived at the American music of Aaron Copland… gospel is added to the mix… Batiste is now on an electric piano… a male and female are scatting in a very jazzy section of the music… Native Americans are drumming and raising their voices in high pitched harmonies…  suddenly, Batiste stops everything and takes a moment to praise God… “Thank you for bearing witness… you have no idea the forces we were up against that have brought us to this moment”… when the music resumes, it enters into a crazy jam intended to build to a climax… this saxophonist is the best I’ve ever heard… now Batiste, his back to us, is side by side with the conductor and their ebb and flow, sharing their duties conducting is breathtaking… this final piece is titled “Majesty” and is living up to its name to the fullest… these last thunderous moments are the equivalent of a storm gathering (echoes of its beginning), and resulting in a downpour, followed by a rainbow in the sky.

If that seems somewhat poetic, it was not my intent. However, it feels right as a way to pay tribute to this extraordinary piece. Congratulations to Jon Batiste and to all involved with “American Symphony,” in hopes of many performances of it to follow.