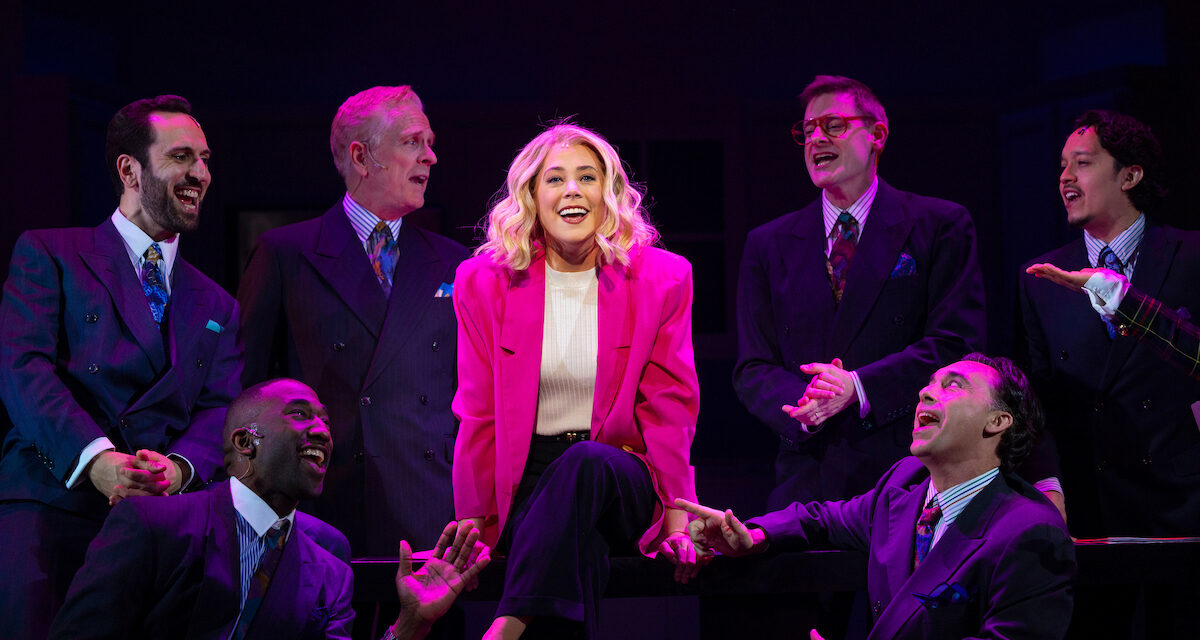 I’m going to refrain from using the title of the show “Joy” as an adjective to describe the production’s many amazing attributes.  The show boasts a dynamic score, captivating lead performance, and top-notch design elements.  The world premiere production at George Street Playhouse in New Brunswick, NJ musicalizes the life of QVC mega-seller and entrepreneur/inventor of the Miracle Mop Joy Mangano.

This beautiful looking production is blessed with a dazzling, intelligent performance by Erika Henningsen as Joy.  She sings the wide range of songs beset with witty lyrics of composer/writer AnnMarie Milazzo with aplomb – quickly creating an indelible, lasting impression.  This is one of those essential must be seen well-cast, award certified performances.

In a prologue, we are introduced to Joy as a child (Olivia Jones) inventing a dayglo dog collar which her mother immediately dismisses as useless.  The show jumps to 1990s Long Island, with Joy, a divorced mom of daughter Christie (Sami Bray) living with her mom Toots (Vicki Lewis), her lump of an ex-husband aspiring singer Tony (Trent Saunders) and suddenly her ne’er- do-well father Rudy (Stephen DeRosa).  Everyone expects too much of Joy – running the household, making all the money, baking, and parenting child and her divorced parents.  The scene is set aptly with the song “Welcome to My World.”

Necessity being the mother of invention.  Spilt cupcake batter in the kitchen has Joy envisioning a better mop.  With the help of her dad and his girlfriend Thelma (Hazel Anne Raymundo), they secure funding to produce and sell a few mops.  Realizing selling one of two won’t let them keep the house and pay off Thelma, Joy leaps at the opportunity to have QVC sell the product.

Milazzo crafts a range of song styles for the impressively talented cast to sink their collective talents into fiercely.  There’s an ode to 1990’s Robert Palmer visually and musically with the “Return to Vendor.”  Here the cast is well utilized in concert with set designer Anna Louizos and lighting designer Jen Schrier’s largely impressive work.  DeRosa’s big number “I Got People” could use less sweat and more panache.  It’s a great opportunity for a bold Sinatra-type song.  One wishes DeRosa landed a more suave, multi-varied performance but overreaches for notes. Acting-wise, he handles the broad comedy well.

Louizos appoints the Mangano’s with a crowded but nicely realized home, complete with work room for Joy to design and create the first mop; neighborhood scrim; QVC boardroom and production studio; courthouse hallway and court.  The sets are detailed and well crafted.  Schrier’s lights complement the sets fully and colorfully, providing ample shading and focus, although there’s a surprising lack of color in act two’s archly sarcastic number “Little Lady.”  These are Broadway ready sets and lights.  Tina McCartney’s period appropriate costumes offer a wide range of looks that all work well.  She decks the cast out in a ton of shiny suits; 90’s corporate; and cowboys and girls.

Ken Davenport’s book too often strands the secondary characters Toots, Rudy, and especially Tony with little definition.  As their storylines directly impact Joy’s, this leaves the audience needing more for fuller investment.  With too little motivation other than wanting to not break his daughter’s heart, Tony yearns to reconcile.  He’s gifted with a strong well performed act two number “Walk with Me.”  For whatever undefined reason (Ego? Other women?  Wanting to prove his own worth?) he can’t commit to Joy.  And as performed by Henningsen – she’s not a woman resting on her laurels and waiting for the world to come to their collective senses.  He’s left looking shamelessly unworthy – especially in the unbelievable denouement.

Vicki Lewis is a gifted comedian.  Her Toots is left stranded with a single sarcastic physical bit of comedy early on.  Otherwise, she trades some insults with Rudy; criticizes Joy; and provides the inspiration for Joy to pursue QVC.  Ultimately, there’s not enough to the role to fully embrace her talents or for the act two turn of character – even with a strong song – to call the role more than a caricature.  Raymundo’s Thelma is stuck with a largely undecipherable accent that leads to some good jokes but again a one-note character. While Badia Farha’s Ronnie is an essential character worthy of a song and a conversation between her and Joy, that relationship is worth exploring.

As Cowboy Eddie, John Hickok portrays a truly nefarious shady good ol’ boy.  He and the chorus play the song “Little Lady” to sarcastic hilt. This finally gives choreographer Joshua Bergasse room to show off the cast’s moves.  Here, Henningsen has someone – besides Farha – worthy of allowing her Joy to shine and illustrate the powerful force of nature both character and actress are.  We see a lot of this earlier in the invention song “Mommy’s Making Something out of Nothing” and the 11’o clock number “Have You Ever Felt That?” where Henningsen’s acting and fully realized character, coupled with excellent singing make the show gripping.

Davenport and director Casey Hushion could rework their landing.  There’s a fussy rush to resolution that feels forced and underwhelms.  At two hours, the George Street Production feels like a song or two were dropped.  There’s room to give further definition to the essential characters, creatively strengthen the ending, figure out the annoying coo coo clock bit, and let the work breathe more.  Hushion’s pacing moves perhaps at the speed of Joy’s always inventive mind and feels like a marathon.  The strength and gift of the show lies in the visible clarity and intelligence of Henningson’s performance choices.  She should trust her lead’s instincts more.

There is so much to enjoy within Joy.  Its development to Broadway will be exciting and hopefully worthy of the gifted savvy and perseverance Henningson and the creatives bring forth.

Tickets and more information at georgestreetplayhouse.org.  The show runs through December 30th.