Merrily We Roll Along Rolls Into Success 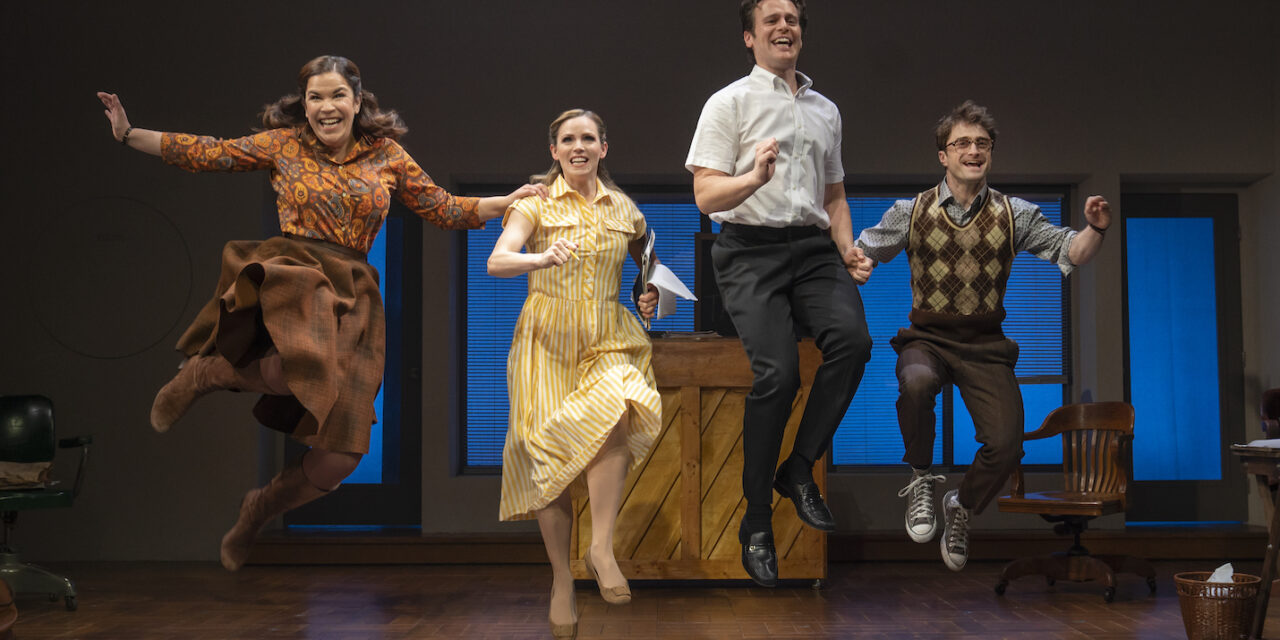 “Something’s happening!” One can see this judging from the long, thick line of fans, huddling under umbrellas and waiting in the cold and rain at New York Theatre Workshop for ticket cancellations to the new revival of Merrily We Roll Along—Stephen Sondheim and George Furth’s backwards-going musical that critics and pundits loved to hate when it opened in 1981.

The sold-out production is being cheered by audiences, thanks to the prodigious work of director Maria Friedman, who has engineered a “hit!” Jonathan Groff (Franklin Shepard), Daniel Radcliffe (Charley Kringas), and Lindsay Mendez (Mary Flynn), star as the trio of friends whose once close relationship, inspired by enthusiasm and wonder, sours after two decades.

From lighting (Amith Chandrashaker) to sound (Kai Harada) to set/costume design (Soutra Gilmour) to Cookie Jordan’s hair and wig design, the creative team make this production shine and cohere like never before. The complicated has been simplified and we can appreciate the musical threads of songs sprinkled and repeated throughout (i.e. “Merrily We Roll Along,” “Old Friends,” “Growing Up,” “Not a Day Goes By”).

The illuminated casting, tweaked configuration of the tricky conceit—a lifetime self-review in retrograde, brisk pacing, and inventive, fluid staging—vault Maria Friedman’s production to “must-see” status. Though tickets can’t be gotten, a producer assured me it will transfer to Broadway.

Down through the years brave creatives attempted revisions of the Sondheim/Furth musical based on George S. Kaufman and Moss Hart’s titular 1934 play. London and West End productions won prestigious awards. In Friedman’s version, directed by special arrangement with Sonia Friedman Productions, The Menier Chocolate Factory (Artistic Director David Babani) and Patrick Catullo, the high concept structure unspools as Franklin Shepard’s psychic flashback of remembrance. As the chorus sings the lyrical “Merrily We Roll Along,” the main theme is presented. Living life, one doesn’t always stop to reflect how one arrives at the “here and now, and before you know where you are, here you are.”

After the prologue, the scene transitions to 1976. Frank, the self-absorbed, compromised composer/producer (expertly realized by the likable, attractive Jonathan Groff), hosts a party. As the film cast and friends celebrate his “genius” (“That Frank”), he lauds himself for achieving everything he ever wanted.

In the role of Mary, Lindsey Mendez’s ironic delivery, near-perfect portrayal and powerful voice stir our hearts. Mary tries to save Frank from his next mistake, another divorce and a rebound marriage. Drinking heavily and quipping sarcastically at the guests, she loses control and makes a scene. She reminds Frank how much he’s changed from the “old friend” of theirs who never settled for mediocrity. Mary tells him he is “junk” and deserves the people he is with, then storms out.

In a scene topper, Frank’s second wife, Gussie (Krystal Joy Brown) announces that she is divorcing Frank because he is having an affair with Meg (Talia Robinson), a starlet he cast in his upcoming film. In a memorable coup de grace Gussie throws iodine in Meg’s eyes.

Obviously, this is not a man who has everything. The notes of the “Merrily” refrain begin again as the guests sing the lyrical theme initiating Frank’s flashback, “How did you get to be here?” Friedman positions Frank center stage in reverie, as the chorus moves back and forth, “rolling” with paced staging. Frank becomes an everyman with whom we can identify, as we watch him consider the decisions of his life that shaped his identity and career pathway.

Frank has been too busy to stop and reflect that his “rat race” mentality of making money and achieving commercial success has devalued his talent and destroyed his most important alliances. The musical is Frank’s meditation and reevaluation. Where did he go wrong? Friedman’s clarifying approach reveals that in every instance, as Frank examines his life and sees how he took a wrong turn, friends Mary and Charley warned him.

The transition to the NBC Studio scene in 1973 includes Mary and Charley singing, in remembrance, the tuneful “Old Friends” (the first time we hear the song), as Mary importunes Charley about “The Way it Was.” She believes Charley can break through the brick wall Frank has become since his marriage to Gussie. However, when Frank presumptuously shows up very late, Daniel Radcliffe’s Charley blows a gasket on TV in the hysterical “Franklin Shepard, Inc.” Radcliffe pulls out all stops, using irony, humor, fury and rancor for one of the high points of the show, which signifies the end of their friendship.

Frank flashes back to the years when the three affirm their friendship (“Old Friends” part II), and his relationship with Gussie (“Growing Up”) as he steals her away from her husband and producer, Joe Josephson (Reg Rogers in a wonderful portrayal). Act I comes to a close after his divorce from Beth, when Mary and Charley tell him to walk away. Katie Rose Clarke’s Beth sings the beautifully haunting “Not a Day Goes By,” and breaks our hearts. In “Now You Know” Mary, Charley and the chorus encourage Frank to go on a cruise and resettle himself after Beth wipes his bank account in vengeance.

By the end of Act II, Frank returns to that exact moment that brought the friends together. It was a magical night on a rooftop in 1957, when Frank, Mary and Charley bonded. As they watch Sputnik arc across the heavens, it becomes their shooting star. It is their time, and they can accomplish anything.

Friedman and her trio, who really fit as friends, achieve the difficult and make the convoluted lucid. Though the Jonathan Tunick orchestrations are slimmed to nine players, Catherine Jayes (music supervisor) and Alvin Hough, Jr. (music director) keep the transcendent Sondheim score shimmering with loveliness. Additionally, the choreography (Tim Jackson) is limited to movement, which makes sense for this internal meditation.

You can try your luck for tickets by showing up at their venue. You cannot book online.

Merrily We Roll Along. Through January 22, 2023, at The New York Theatre Workshop (79 East Fourth Street, between Second Avenue and the Bowery). www.nytw.org