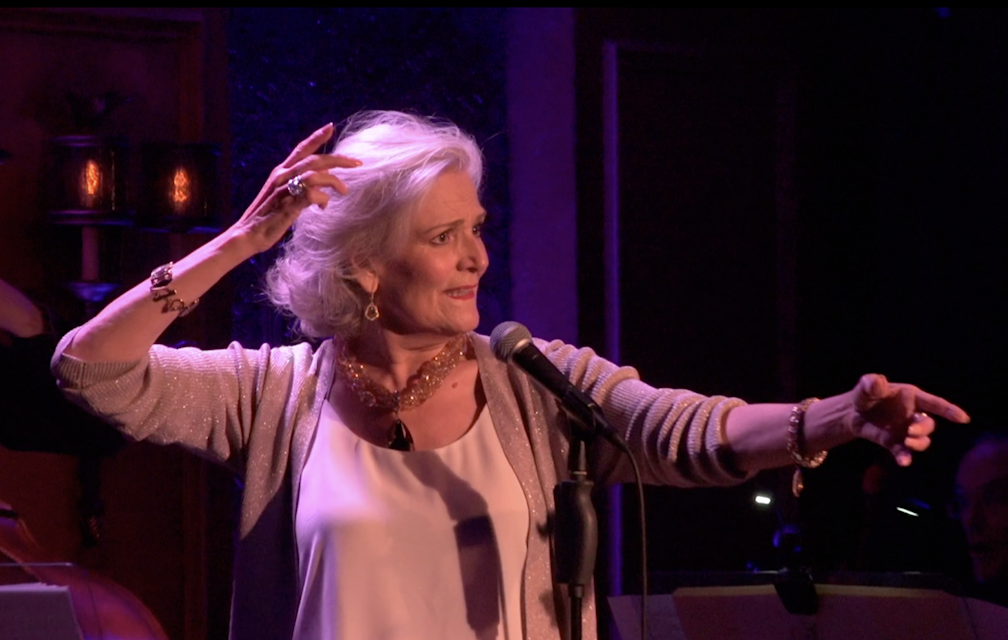 Karen Mason has starred on Broadway and in cabaret for decades.  She originated the role of “Tanya” in the ABBA musical Mamma Mia! In 2001, and played the leading role of Norma Desmond in Sunset Boulevard some 300 times in Los Angeles and on Broadway.  Despite having reached a “big birthday” this year, her voice has lost none of its agility and power, and her vast experience gives her formidable skills as an interpreter of music and an ease with telling stories that make you want to know her even more.  Aside from the excellent singing, Karen’s sweetness and humor, a carefully curated song list of Broadway and pop tunes, and a trio of fine musicians made for a “four-Pizzazz” show at Feinstein’s/54 Below on November 16.

Karen’s sold-out, 15-song set, led by Chris Denny, Karen’s musical accompanist and director of some 30 years, had originally been scheduled as a celebration of her birthday in 2020 (which is actually March 31st), but was long delayed due to the pandemic.  The venue had numerous entertainment luminaries in attendance, including Broadway musical theater star Lee Roy Reams, cabaret legend Karen Akers, producer/performer Jamie deRoy, and composer David Friedman (whose song “Let the Music Play,” co-written with Karen’s husband and producer, Paul Rolnick, was included in the encore).

A brief, amusing “Vaccinatin’ Rhythm,” a parody of Gershwin’s “Fascinatin’ Rhythm,” set the stage for her pandemic stories and jokes.  She claimed to have performed shows during the pandemic at the Frank E. Campbell Funeral Home.  “People were dying to get in.”  She declared that post-pandemic, “I want my life to be about making dreams come true.”

An interesting medley of two “boy” songs from different musicals by the same songwriting team (Charles Strouse and Lee Adams), “Golden Boy” from the show of the same name, and the surprising choice of “One Boy” from “Bye Bye Birdie,” created a fascinating contrast.  “One Boy,” a teen angst song of puppy love sung in the show by a 15-year-old girl just learning about boys, here sung from the perspective of a mature woman who has already experienced love and long relationships, creating a wistful and poignant elegy.

The “59th Street Bridge Song” (Paul Simon), also known as “Feelin’ Groovy,” had some great work by Tom Hubbard on the bass.  Starting with a high-speed walking (more like running) bass line, Karen stopped him with “SLOW DOWN!…. you move too fast” (the opening lyric), and the trio provided the vocal harmonies of Art Garfunkel.

Karen “shamed” her character of Tanya from Mamma Mia!  “No one can play a slut like a Midwestern Catholic!” and sang “I Have a Dream,” a song performed by another character in the show. It was a beautiful ballad, sung with a sweet delicateness and vulnerability.

The first song Karen ever sang in the theater was “Play Me a Country Song” (Harry Manfredini/John R. Briggs), from the show of the same name that opened and closed on June 27, 1982.  Sitting on a stool, she emphasized “the one night.”  It was clear she has much affection for this lost song, and she gave it a new life after nearly four decades on the shelf.

Karen showed off her acting chops with “Colored Lights” (John Kander/Fred Ebb), an “oom-pah-pah” waltz that garnered the biggest reaction of the show to that point, with a standing ovation.  Karen kept the momentum going with her bravura performance of song from Sunset Boulevard, “As If We Never Said Goodbye” (Andrew Lloyd Webber/Don Black), which brought the entire crowd to its feet.

“Over the Rainbow” (Howard Arlen/Yip Harburg) from The Wizard of Oz is one of the most overplayed songs in the world, and Karen was a bit reluctant to sing it.  By dampening expectations, she instead exceeded them, singing from a place of hope after this long absence, someone who has “been there” and is going there again.  Karen was rewarded with another, well-deserved standing ovation.  An exceptional show by an exceptional artist, one can anticipate another Karen Mason birthday show in just a few months.