Kate Baldwin: Sing Pretty, Don’t Fall Down at 54 Below 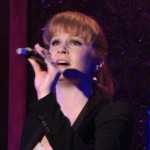 Kate Baldwin (Tony nomination 2009 revival of Finian’s Rainbow, 2012 star of musical Giant and 2013 musical Big Fish fame), has a big lush singing voice and charm to burn. The career advice given her early on, to “sing pretty, don’t fall down,” has clearly been followed—luckily she has the voice and talent to more than fulfill this direction. Her show at 54 Below aims to talk about her life and career in the context of some musical classics, some current, some standard. She began with the song Rockstar (Axel, Vaccarino): “There’s a girl in the backyard bangin’ on her drum, Sittin’ in a junk pile laughing at the sun, Singing, ‘Ah ha ha, I just wanna be a rockstar’…” The song was a great opening on many levels because it speaks of dreams and aspirations in a unique and whimsical way with a lack of cliché, and highlights her particular humor and showmanship. The song Your Texas (LaChiusa) from the musical Giant was another clearly observed portrait of a life dreaming: “I have daydreams don’t you know…” In this venue, Kate Baldwin is at her best when she’s singing in earnest, not so concerned with perfection.

For surprise and fabulous fun, she brought in dear friend and colleague Katie Thompson to sing a duet of the Dixie Chicks’ Sin Wagon which kicked up an already happy evening. They also paired up to sing a traditional Irish drinking song The Parting Glass with a simplicity and sweetness that was very touching.

She closed with an encore of How Are Things in Glocca Morra (Lane/Harburg) leaving us with another lovely dream.

She is accompanied by Georgia Stitt on piano, Brian Hamm on bass and Michael Croiter on drums.