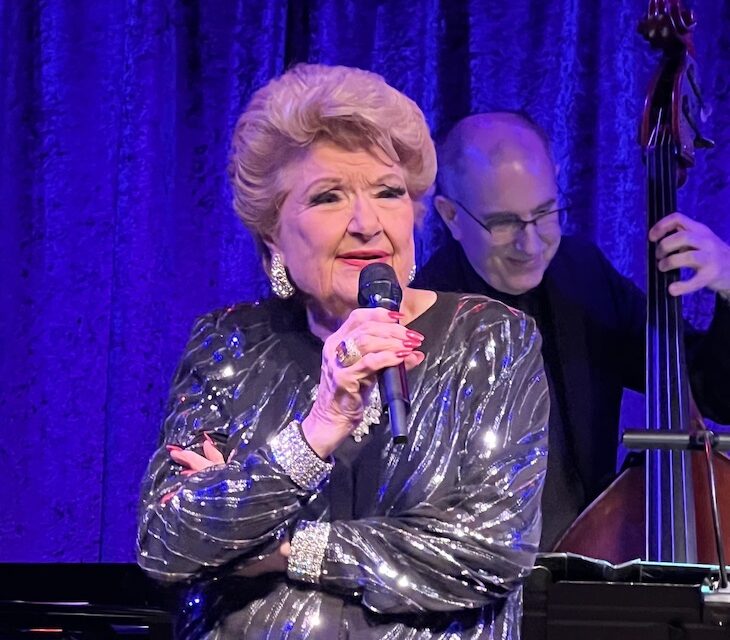 The Unsinkable Marilyn Maye returned to the Birdland Jazz Club last night for the first in a six-show engagement through New Year’s Day (and evening) in what can only be called a triumph. At age ninety-four, with no evidence of slowing down, this unparalleled entertainer is back to give a master class in performance art. Without exaggeration, her ability to communicate in song is without peer. If you’re not leaning forward to glean every lyric, you are sitting back in marvel at the level of accomplishment on display.

For those unaware of who Marilyn Maye is, or how she got to this place in her career, the simple facts are easy to enumerate. She began in her native Kansas as a child performer (age nine was her debut) and found gainful employment at one point for eleven straight years at the Colony Club in Kansas City doing as many as four shows a day. Happening into the club one night, she was rescued from obscurity by the popular TV personality and songwriter Steve Allen, who put her on a variety program he was hosting in Los Angeles in the early 1960s. Hardly an overnight success, she had already been performing for almost twenty-five years. A recording contract with RCA followed, but in spite of appearing on The Tonight Show Starring Johnny Carson 76 times (!), more than any other singer, she never broke through to the top. Although she’d performed in New York City many times over the years, a fourteen-year gap occurred between 1992 and 2006. Her appearance at a Mabel Mercer Cabaret Convention at Lincoln Center caused a sensation, capturing the attention of critics and audiences alike. At seventy-eight, she was the toast of the town. Over the last sixteen years, she has proven time and again, through endurance and transcendence, her proper place as an icon in the world of jazz singing.

And last night (Dec. 29) at Birdland was no exception. Having seen her perform in intimate clubs like this over the years, I was once again astounded by her song stylings, as well as by her acting. What sets her apart from so many singers is the way in which she tells her stories, none of it by rote. A good deal of her repertoire goes back as far as sixty years or more and yet, during her rendition of Harold Arlen and Johnny Mercer’s “One for My Baby,” her conversation with the bartender named Joe in the lyric was as vivid as if he were on stage next to her. She sings as if she were discovering the words for the first time, a rare gift. Not surprisingly, her performance of the song garnered the biggest ovation of the night.

Mercer and Arlen were prevalent in this particular set, as were many composers and lyricists out of the Great American Songbook (even post that period with Stephen Sondheim’s “Old Friends” among her choices). Her closing song, “Here’s to Life,” a 1992 hit for jazz great Shirley Horn, made for a moving testament to the way Maye has gotten to ninety-four with her passion and commitment to her ideals intact. I was moved to tears by it.

Opening with a tireless ten-minute Cole Porter tribute put her indefatigable talent on full display. The first line “and if you’ll only stay then I’ll spend it looking at you” was from Porter’s 1929 “Looking at You,” and she closed out the medley with the line “I love all of you,” from 1954’s “All of You” – – directed to the Birdland crowd spoke volumes. She does indeed love her audiences and it carries over the footlights (even if there aren’t any footlights). It’s a powerful beam, laser-focused on delivering her songs with aching intent. As Ira Gershwin wrote, “who could ask for anything more?”

For further convincing to make a reservation (if any are to be had this weekend), here’s a list of some (not all) of the songs you will be treated to:

“Anyplace I Hang My Hat is Home” – Harold Arlen/Johnny Mercer

“This Could Be the Start of Something Big” – Steve Allen

She even improvised a rendition of Frank Loesser’s “What Are You Doing New Year’s Eve?” simply because she felt it in the moment. Approaching her accompanist, Ted Rosenthal at the piano, she asked him to vamp the opening and off she went. She was struck by an idea and riffed on it, to the delight of everyone. Though her first time working with Rosenthal, she had her longtime associates Tom Hubbard on bass and Daniel Glass on drums lending extraordinary support. Maye’s onstage rapport with her musicians is another example of what makes her a class act.

I’m always in mind of Carly Simon’s “Nobody Does it Better” when I’m in the presence of Marilyn Maye. Has she ever sung it? Maybe. If not, there’s still time. Although, if she does, it will also put me to mind of my dad’s rendition of it after we exited seeing the James Bond film The Spy Who Loved Me, for which the song was written. As we walked back to the car, he started singing what he misheard as its lyric: “Nobody Does it Forever.”

No, nobody does it forever. But Marilyn Maye still going strong in her ninth decade would be the one person who, if not capable of breaking that rule, is in full power of bending it to her will.

Marilyn Maye will be at Birdland, 315 W 44th Street through January 1st. Please visit their website at https://birdlandjazz.com.