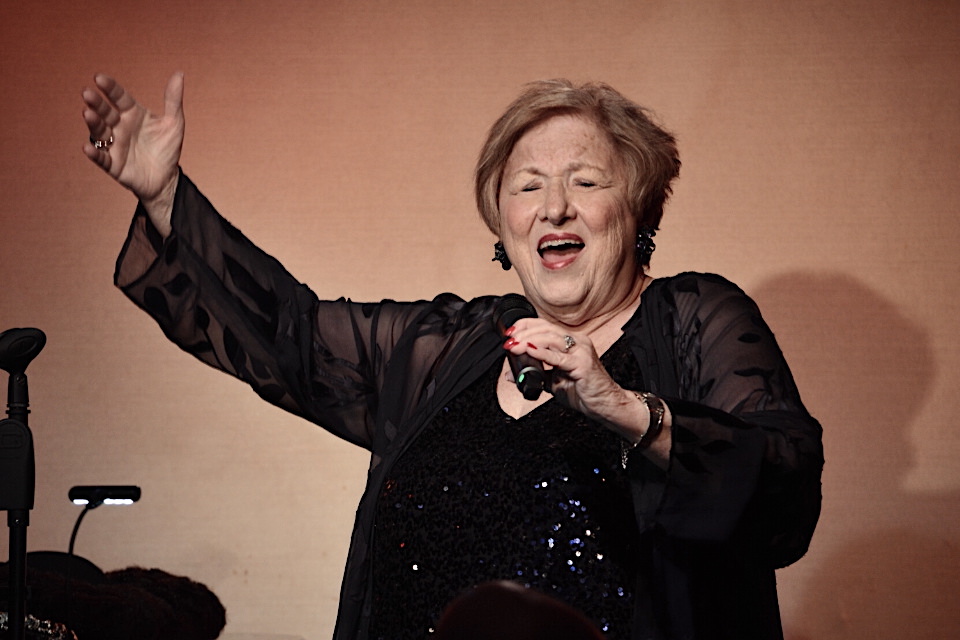 While the New York theater world discusses who is the best Fanny Brice on Broadway, Naomi Miller might be as close to the real thing as you’ll find in 2022, though more of a Funny Bubbe than a Funny Girl at this stage of her life.  With the help of musical director Dave Schlossberg as her announcer, accompanist and occasional harmonizer, Ms. Miller presented a delicious, four-course musical comedy meal of creative medleys that was often belly-laugh funny and sometimes quite touching.  A polyglot who sings in a dozen languages (including sign language), Ms. Miller has a warm, inviting presence that immediately grabs an audience’s attention, and kept that attention for an entire show.  The daughter of Holocaust survivors, she is a throwback performer, someone you might have seen in the old Yiddish Theater district in the days of Molly Picon.  She has the timing of a comedian and is a good singer.

For her first course, “From Klezmer to Broadway,” she came out wearing a very vintage black fur shtreimel on her head.  She sang, in perfect Yiddish, a medley based on Az de Rebbe Zingt (when the rabbi sings), in perfect Yiddish.  [On a personal note, the medley included a lullaby about sleeping (“Schluffen”) that my Yiddish-speaking grandfather sang to my brother and me.]  A medley of songs from Fiddler on the Roof, sung mostly in Yiddish, was terrific and funny.  Ms. Miller is not stuck in the musical past, however, as evidenced by a medley from The Lion King, still running on Broadway today.  For “The Click Song” from that show, she taught the audience to use an African Xhosa clicking sound (“Not a cluck!”, she chastised the audience).

Like a Broadway Berlitz, Ms. Miller flaunted her language skills with “Lullaby of Broadway” from 42nd Street in French, Italian and Spanish, and “One” from A Chorus Line in Japanese.

Her funny, sometimes self-deprecating shtick was often as much visual as verbal, her timing impeccable.  In her “Aging/Shmaging” course, she confessed to being 76 years old, joking about things like “Hooters for Seniors” and imagining what zip lining might look like for her, with great physical comedy. During a medley of songs from female singers over 60 who have inspired her, she worked up quite a sweat by the time she got to Tina Turner and “Proud Mary,” asking if anyone could spare a napkin, exclaiming, “I’m schvitzing here!”

The final course, “Love, Marriage, Children and Liposuction,” contained several poignant moments, notably “Why Did I Choose You,” dedicated to Harvey Miller, her late husband, who passed only a couple of years ago.  A great bit about weight that included an actual scale and some delicious physical comedy helped her introduce ‘Successful Slimming,” a funny song by Harvey and Carole Wechter.

About the only thing that could use improvement here is Ms. Miller’s reliance on having to look at her script and lyrics, which were on a music stand at center stage.  At one time, she forgot some lyrics and had to start over, but even here, she sang about what was happening without missing a beat, which was quite endearing.  That said, Naomi Miller’s Musical Smorgasbord is a well-constructed cabaret buffet that will leave you sated, yet wanting a bissel more.