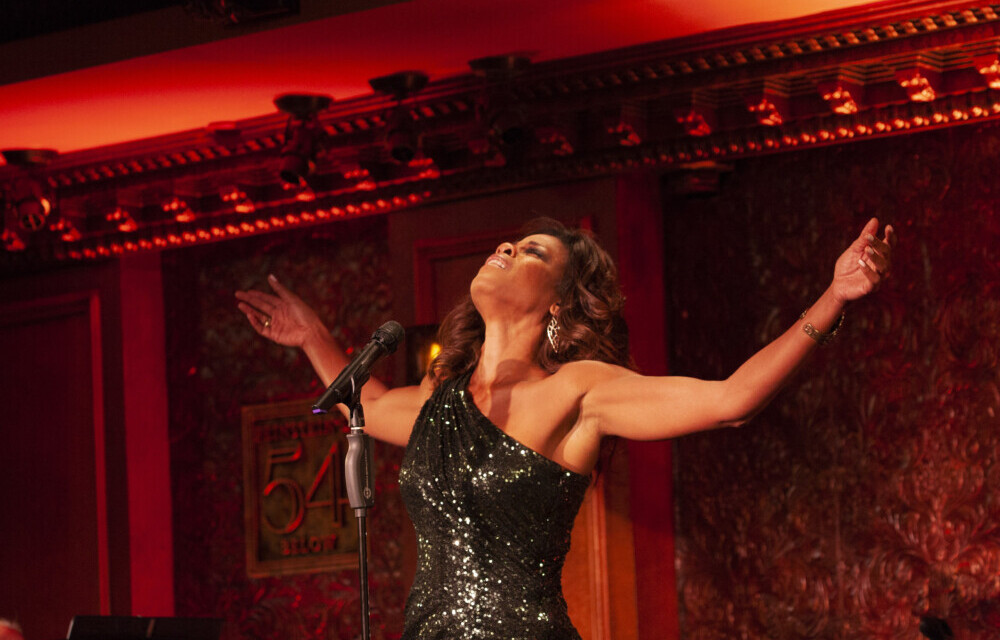 Although she’s technically defined as a jazz singer, Nicole Henry is much more than that. Categories can’t contain her. Henry is a very polished entertainer who capably handles jazz standards, Broadway hits, and songbook and popular music equally well.

The eponymous opener, “Feeling Good” (Anthony Newley/Leslie Bricusse), not only announced “star quality,” but spoke to the delight of performers, venue staff and audience members alike, thrilled to be back to live performance after 15 months of COVID isolation at Feinsteins/54Below.

With a powerful voice, sparkly glamour and flashing smile, the easy analogy would be to compare Henry to Whitney Houston––a similarity she explored in her last show at Feinstein’s/54 Below: …Sings Whitney Houston. Most likely any performer cut from the same cloth as an artistic forerunner has to face that fact as both a curse and a blessing. Yet Henry is, of course, her own person, and presumably she’s assured enough to embrace the Houston legacy, avoiding (as she does) mimicking the late superstar. “I’m Every Woman” (Nickolas Ashford/Valerie Simpson), in this current show, was an homage to Houston, and one of many divergent numbers expressed throughout Feeling Good! in her own confident style.

Henry, armed with a seamless and naturally-spoken narrative, made a firm audience connection with plenty of charm and wit. The set list covered a lot of ground with something for everyone, structured intelligently to catch a range of emotional beats, including a nod to Juneteenth and Pride Month. Henry was directed by Will Nunziata, who continues to demonstrate that when he branched out from performing to sit in the director’s chair it was the perfect move.

Happily, Henry is savvy about vocal control. Her voice is naturally robust, but she knows how to tone it down when appropriate. Ballads “You Taught My Heart to Sing” (Sammy Cahn/McCoy Tyner) and “Don’t Take Your Love from Me” (Henry Nemo) were gentle and emotive––just the right touch for the latter, especially, should anyone care to reference Frank Sinatra’s swinging version. Another old standard, “When Did You Leave Heaven?” (Walter Bullock/Richard Whiting), sung as a blues, transformed and breathed new life into a tune written nearly 90 years ago.

Two medleys hit the mark: Irving Berlin’s “Count Your Blessings (Instead of Sheep) with “Little Girl Blue” (Richard Rodgers/Lorenz Hart), and “I’ve Got Rhythm” (George and Ira Gershwin) with “A Lot of Livin’ to Do” (Charles Strouse/Lee Adams), offered delightfully unique pairings. The penultimate number of Feeling Good was a Broadway hit that’s always a joy to hear. “Home” (Larry Kerchner, attributed to Charlie Smalls) was given a rousing, controlled-belt interpretation that left no doubt we all felt quite home hearing this great number live again.

Backing Henry was a superb quartet of musicians. The nimble-fingered David Cook served up excellent arrangements on piano, with solid bass playing from Richie Goods and creative guitar in the hands of veteran Avi Rothberg, With these three adepts was a young drummer that bears watching. Elé Howell seemed to possess a Zen quality of oneness with his kit. His playing was not only wonderfully nuanced, but often transcendent. And he’s only 22 years of age; imagine what he’ll do musically with many more years ahead to lay experience under his belt.

Photos Courtesy of Feinstein’s/54 Below