Peggy and Nancy, The Most Dynamic Duo Living or Dead 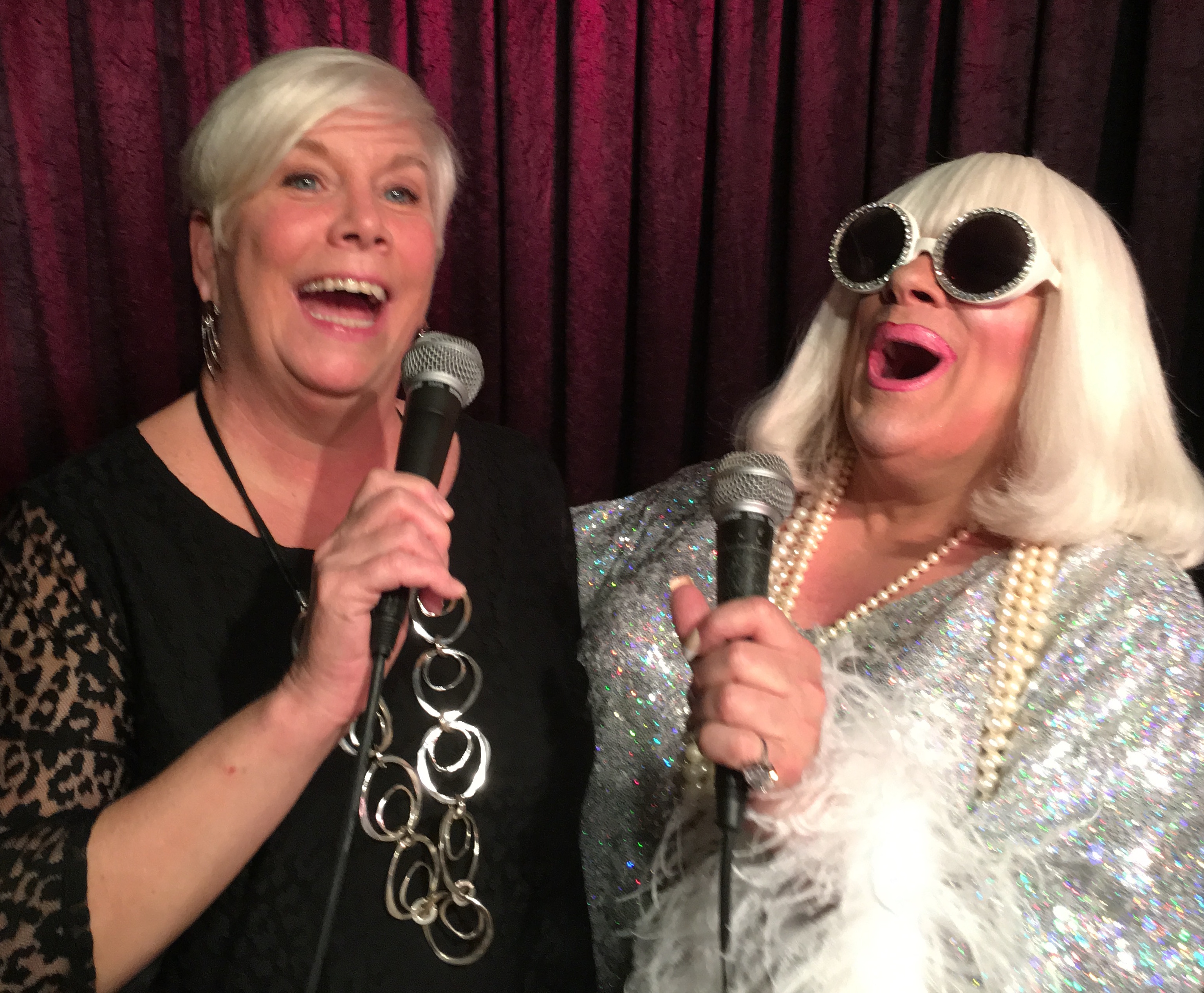 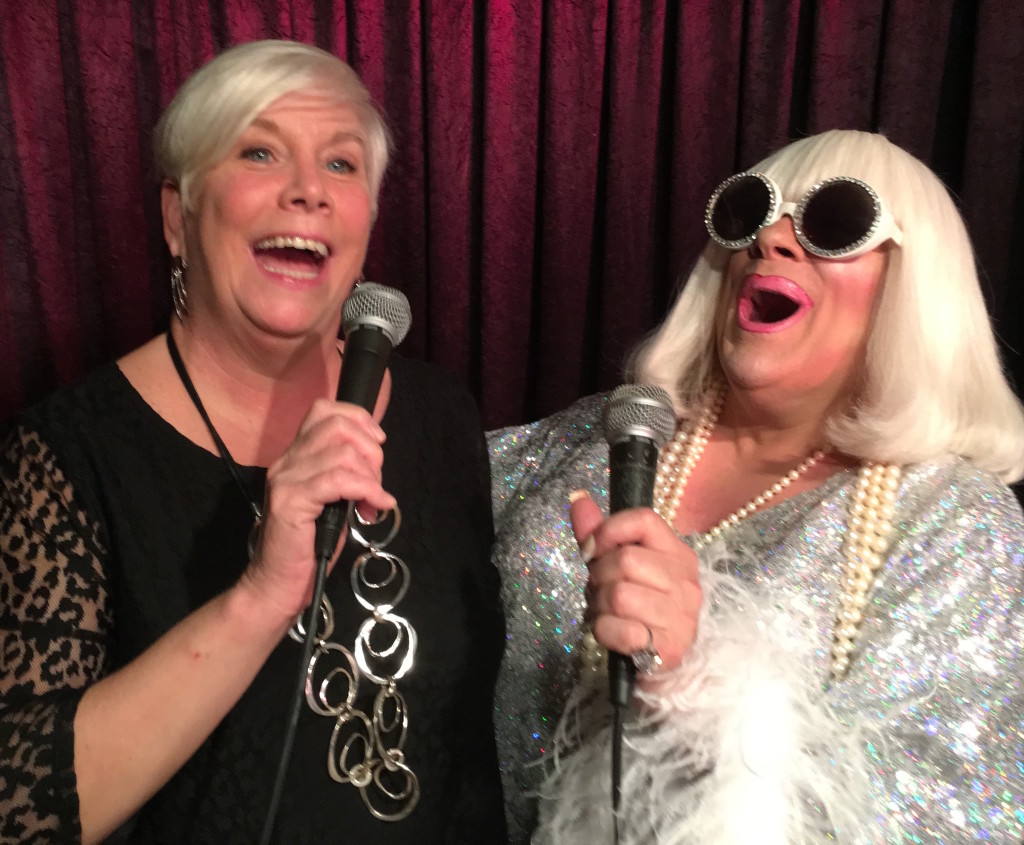 Last week formerly deceased songbird, Peggy “Lazarus” Lee, joined the pantheon of resuscitated megastars, or reasonable facsimiles thereof, in the cabaret catacombs at the rear of Don’t Tell Mama, a mostly female haven, where (in alphabetical order) Lauren Bacall, Fanny Brice, Marlene Dietrich, Judy Garland, Madeline Kahn and Sophie Tucker now abide while Liza and Carole Channing wait in the wings. Ms. Nancy Witter, a Nick at Nite’s Funniest Mom in America Finalist, accompanied Ms. Lee back from the afterlife. The disembodied voice of comedian Ted McElroy portrayed a bored booking agent who stumbled on the Eureka! idea of matching up a semi-discombobulated, intermittently drug-addled, 96 years young, not quite living legend and a half-her-age very Cath-o-holic Mom, having them introduce themselves to each other via songs, stories, limericks and befuddled memories before taking their has been/wannabe act to hot destinations like Terre Haute IN and Cedar Rapids IO, before arriving at the showroom dedicated to Ms. Lee in Branson MO in her dreams.

Ms. Witter is a very direct and effectively hilarious performer. She makes no bones about from whence she came – a family with more children than her mother had memory. Her crafted truthfulness makes her very easy to understand, relate to and love. And her material kills! She interacts very compellingly with Ms. Lee. I predict their future together will be even more astonishing than either of their pasts.

As for Ms. Lee, her ectoplasm has been deposited into the corpus of OMG! Mac and Bistro-Award Winner Chuck Sweeney, whose body, I daresay, is shaped more like a fireplug than the one Ms. Lee inhabited in her previous life. Spoiler alerts: the lady has “memory issues,” and fan-blown flowing diaphanous gowns are now out.

Ms. Lee and Ms. Witter present a fashion contrast. Ms. Lee was ensconced in a silver-sequined long-sleeved sturdy robe, festooned with pristine snow white, but imperfectly glued feathers. Glitzy diamond studded white sunglasses covered most of the face that remained visible between her platinum page boy hairdo and the extended ropes of pearls – picked up on Bourbon Street after Mardi Gras? – which swung between her neck and her Christian Louboutin-ish stiletto heels.

The more down-to-earth Ms. Witter was loyal to the national color of Ireland. Her black sheath with unwashed lace-curtain Irish sleeves bedecked by a looped circular silver necklace would be considered haut couture at any Irish wake.

Ms. Lee sung her heart out, backed by full orchestral tracks complete with key changes, which she pointed out lest anyone miss them. She sounded as glorious as ever warbling her biggest hits: “Fever,” “Is That All There Is?” and “He’s A Tramp,” the tune that paid for her lavish funeral after the law helped her squeeze royalties due her from that tightwad Walt Disney, rumored to have become the first cryogenically frozen corpse but actually cremated. Talk about irony! Ms. Lee also shared a real-time recording of her conversation with an OnStar functionary when the car she was driving ended up in her neighbor, Ms. Mary Pickford’s, swimming pool. Chuck’s presentation of Peggy Lee is a loving portrait. It’s a prototype of any great singer with a few flaws she’d prefer to keep to herself. Fortunately, Chuck Sweeney tells and sings all.

Ms. Lee hopefully will be back from the crypt at Don’t Tell Mama again soon, either with Ms. Witter or accompanied by Lee Liberace aka David Maiocco in a show called Lee Squared. However, if you feel the need to double up with laughter in the interim, Ted McElroy in the flesh and schlepping his oxygen tank will be at Don’t Tell Mama on Saturday Night July 9, 2016 at 7 pm celebrating his Second Annual “I’m Not Dead Yet … But I’m Getting Closer” reunion with his longtime partners-in-laughter and mates-in-verbal mayhem from the funniest hour ever broadcast on the radio waves, Joey Reynolds’ WOR-AM Gay Hour: Nancy Witter naturally, Chris Christie’s nemesis Danny Williams, the incomparable “I Love” Sidney Myer, Osama Bin Laden’s widow Mamie ne Shecky Beagleman, hopefully in full burqua, and Richard Green from the old Ron Poole Comedy show.

Two drink minimum. The maximum is up to you.