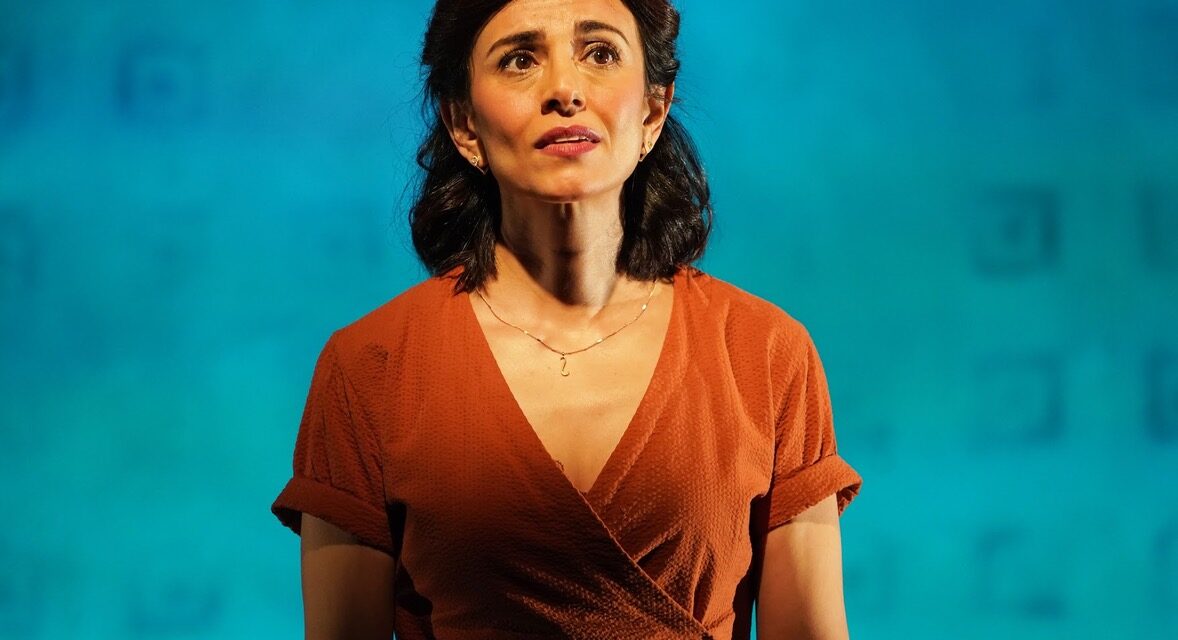 Stage monologues are tricky things, difficult to pull off in both writing and performing. Over the years, I’ve seen some magnificent plays and actors triumph in the genre, as well as some of the greatest playwrights and actors crash and burn. One time it worked brilliantly was when Billy Crudup performed the one-person Harry Clarke in 2018, playing a multitude of characters. That play, like Sandra, which opened in a world premiere last night at the Vineyard Theatre in Union Square, was also written by David Cale and directed by Leigh Silverman at that same venue.

Perhaps, then, it’s unfair to make comparisons; but considering the similarity of the ingredients, the memories of the superior Harry Clarke linger. As Sandra, Marjan Neshat, a lovely actress, inhabits the role strikingly. She must also portray everyone Sandra comes in contact with, a task she accomplishes somewhat less resourcefully. That said, Neshat does hold our interest throughout, even when Cale’s tale relies on coincidences that force credulity.

No unreliable narrator, Sandra is an honest and forthright person confronting a situation that ultimately consumes her, forcing her to lose everything she once held dear. When we meet her she is just past forty and living in Brooklyn where she runs a café. She and her husband have recently separated and, from what we hear (and when we eventually encounter him), there’s little to believe they can make a go of it after twenty years together. The play hinges on Sandra’s friend Ethan, about a decade younger and with whom she is very close, who offers a somewhat cryptic goodbye to her prior to taking a trip to Mexico. When later she gets a call he is missing, due to her being someone in Ethan’s contacts, she is told he never got on the plane home nor used his cell or charge card. With him completely off the grid, the police who question Sandra seem to take it for granted that a young gay man like Ethan would have gotten himself into trouble that a straight man wouldn’t. Their checking off that box leads Sandra to hop a plane to Mexico and see if she can possibly unravel the mystery on her own.

Things get tense and the drama is rewarding from an audience’s standpoint in that it holds our attention. So, it’s a shame that playwright Cale relies far too often on improbable moments that make up unbelievable contrivances to achieve his goals. Things pile up on top of one another in ways that leave you with the feeling that without them there would be no story to tell. It’s the kind of crutch that forces the results instead of supplying an organic experience.

Of the characters she is assigned, Neshat is most comfortable in Sandra’s skin. And since we spend the majority of the play with her, that’s a pleasure. It’s not for nothing that she is a relaxed performer and never pushes anything, which goes a long way towards her doing a solid job, even though she is not a born mimic and is less convincing when she takes on male roles or speaks in a foreign accent. That’s the missing piece that would allow the play to live and breathe to its full potential.

There is sensitive direction from Leigh Silverman and beautiful lighting design by Thom Weaver. Rachel Hauk’s simple set is just right, and the sole costume Linda Cho has come up with for Sandra/Neshat allows her to move with flowing grace. Music is by Matthew Dean Marsh, which is evocative and essential as another character, in that the presumably dead Ethan is a composer; we hear Sandra listen to his music for connection as well as solace.

The Vineyard is among the best production companies in New York. Plays and musicals that have premiered there over the past forty years have included the original productions of such Pulitzer Prize winners as Edward Albee’s Three Tall Women and Paula Vogel’s How I Learned to Drive, in addition to the Tony Award winning Avenue Q. It is always worth a trip to see what they consider stageworthy and Sandra, though problematic, still offers a commendable theatrical experience.