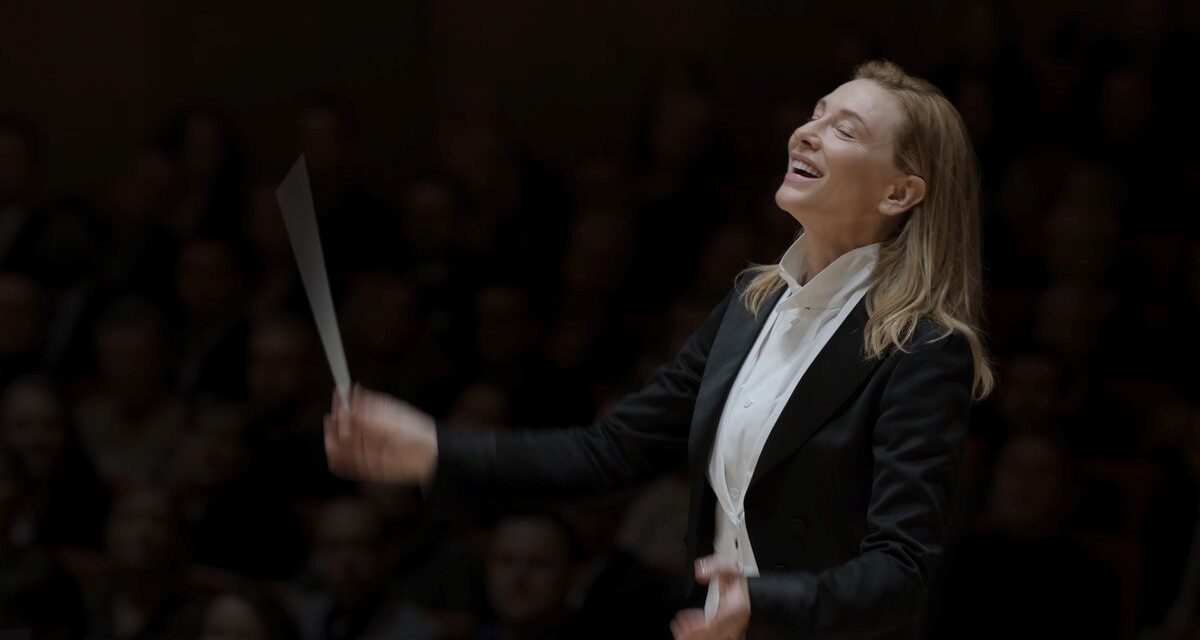 In Tǻr Todd Field has written and directed a masterpiece starring Cate Blanchett in the complicated portrait of a world renown symphony orchestra conductor. The film recently had its New York premiere at NYFF60.

Field’s depiction of Lydia Tǻr resonates with brilliant turns of light and dark. His character examination subtly focuses on the subterranean, unknowable forces that gradually erupt to savage Tǻr’s career. Using Tǻr as a symbol of those who’ve achieved greatness, he explores how power allures and seeks adherents. Oftentimes, chief among idolaters is the one with the power who self-worships. Their empathy for others falters, overcome by the expectations of their exalted position. Blinded, the privileges they expect, and the liberties they take sometimes backfire on them, as happens with Lydia Tǻr.

Acting with dazzling ferocity and authoritative brilliance, Blanchett dons the ethos of the magnificent Tǻr. Lydia Tǻr’s prodigious efforts and genius have lifted her to the mountain top, a secret domain removed from the judgment of mortals. Even her wife (Nina Hoss), the concert mistress of the Berlin Philharmonic, ignores her overweening behavior and infidelities with younger acolytes. Nina Hoss, in the role of Sharon Goodnow, is superb as the silent, unjealous, wife and handmaiden of Tǻr.

Having learned to conduct and play instruments, Blanchett’s dedicated performance is breathtaking. She truly inhabits Lydia Tǻr’s every nuance and feeling as the musical virtuoso. Impassioned and emboldened by her abundant gifts, Blanchett’s Tǻr translates the symphonies she conducts into such magisterial beauty, one surmises the angels weep to hear them. That this fabulous talent falls from grace is all the more tragic. Throughout, Blanchett’s incredible performance elicits sympathy, and we feel deeply as we watch her self-destruct.

The film spools out as a genre hybrid. Part fictional biopic, Field also hits the notes of a musical drama and psychological thriller. Cleverly, he intercuts scenes of cinema verité and nightmare fantasy with spare force. Field suggests clues but gives no clear explanations of her emotional backstory and breakdown. Nevertheless, Tǻr’s collapse, the development of which Field subtly spins toward Shakespearean tragedy, is heightened all the more as we appreciate her monumental conducting talents during her rehearsals of Mahler’s fifth symphony.

To expose the very marrow of the character he has fondly birthed and given exquisite dialogue to, Field reveals a glimpse of the private person through an opaque text exchange at the film’s beginning. Then he switches to the public image of Tǻr during an interview by The New Yorker’s Adam Gopnik, who plays himself.

By degrees Tǻr and Gopnik do a dance of revelation in an extended opening sequence dense with meaning. Fields compels us to catch every nuance, tone, gesture and look Blanchett’s Tǻr expresses as high drama. Though we learn she has been the conductor of the Boston Symphony and the New York Philharmonic, to name a few positions she has held, her apotheosis has been to lead the Berlin Philharmonic for seven years. Additionally, we discover she’s the winner of an EGOT.

Grounded by her mentor, the great Leonard Bernstein, who established the idea of conductor as star, Lydia glides above his shadow and works to surpass his renown. She brands herself as her own phenomenon. From her dynamic conducting presence to assisting with the technology and cover design of her record album and coffee table book “Tǻr on Tǻr,” she controls to dominate.

As Gopnik highlights Tǻr’s accomplishments, he asks her intricate questions that reveal her knowledge and mystifying relationship with her musical talent. In one part of the discussion, she denies that being a woman has been an obstacle; she never considered its import. This subtle clue exposes Tǻr’s key fault: her willful self-blindness and pride.

Discreetly, Field shows Tǻr’s dualities. A wall and growing disconnect separates the public persona and the private secret self. This public/private schism widens with each destructive encounter she experiences with those in her acquaintance, including colleagues. One particularly telling event occurs as she teaches a Julliard class during which a student walks out, disgusted that she dismisses his politically correct and currently chic opinions. This and other events reveal she is presumptuously misreading the signs, as she steers her life and career toward the abyss.

Unchecked by her colleagues and her wife, her breaking point erupts in a violent public outburst. However, Tǻr shows no remorse or accountability. Even the concluding shot of the film, an astounding revelation in itself, indicates that Tǻr has not confronted her own weaknesses. Not coming to the end of herself, Field implies she will free-fall until she seeks sustained help, or her psychosis engulfs her.

As with many tragic figures, the flaw of hubris leaches through the brick and mortar of Tǻr’s exploits. The machine which she used to achieve renown vengefully magnifies her scandalous missteps. Falls from grace by those who are powerful are expedited by social media in our time. Those in the arts are particularly vulnerable. Her life of humble beginnings, which her brother suggests that she forgot, helped to center her true greatness: her desire to achieve and evolve. Overwhelmed by the expectations of privilege and power that come with fame, she succumbed to the delusion of her own self-creation.

Todd Field’s extraordinary work is one to see. It is currently in theaters.