The Anderson Twins at Symphony Space 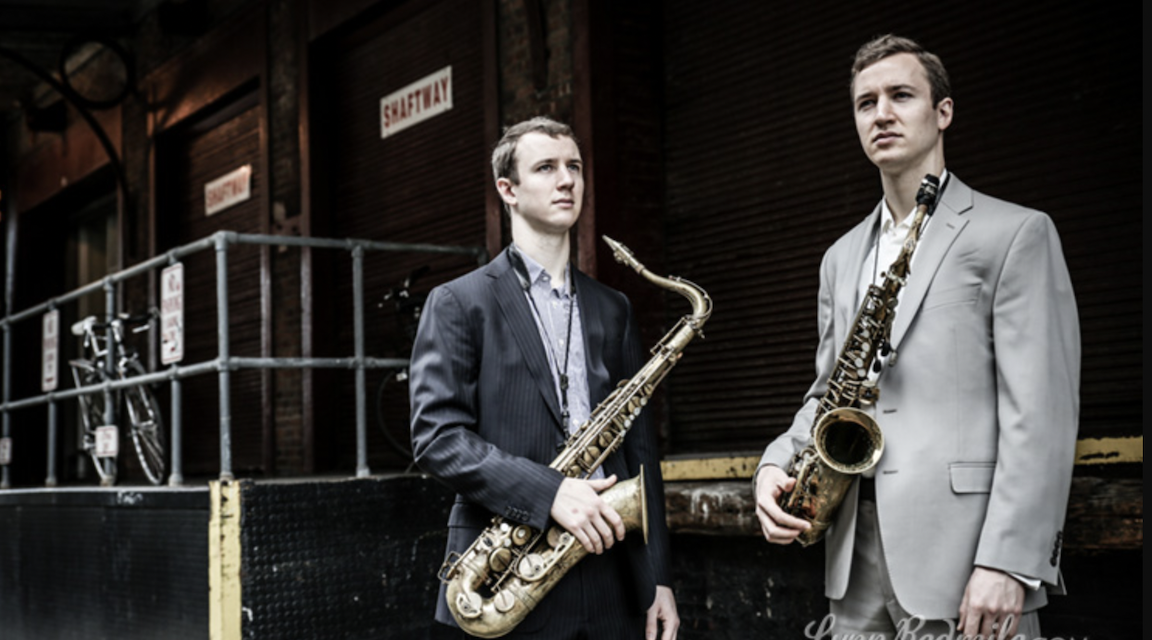 Pete and Will Anderson’s return to New York was further evidence that New York’s music scene is back.  The Andersons returned to Symphony Space for two shows on Saturday, November 6, uniquely blending big band standards with intimate arrangements, this time those of Tommy and Jimmy Dorsey, offering the packed house an evening of relaxing, high quality entertainment.

These twin virtuosos of reed instruments were backed by a traditional three-piece rhythm section, and also trumpet and trombone, adding a brassy edge, previously lacking in their NYC performances.  There were only a few vocals, but they came from Vince Giordano, a headliner in his own right.

The sixteen numbers ranged from well-known (“Swanee”), to more obscure (“Swing That Music”), and from up-beat (
“Flight of the Bumblebee”) to mellow (“I’m Getting Sentimental Over You”).

Pete and Will are Julliard-trained students of the Swing era, who go beyond playing classic music, presenting video clips between numbers.  Other artists offer patter about themselves; The Andersons prefer to focus on legends, offering diverse footage of the brothers Dorsey, from technicolor movies to black and white TV.  Will also spoke of the history of the brothers’ rivalries and collaborations, to great effect, while avoiding irrelevant minutiae (Tommy’s pioneering use of strings, example). My two uninitiated companions loved the music, but also lauded this unique “history lesson”.

But music was the appeal, make no mistake about it, and The Andersons made no mistakes that evening.  Pete’s brilliant arrangements for the septet capture the melodies, rhythms, and excitement of Swing Era classics, originally made memorable by 18 or more musicians.  The audience appreciated long-loved standards of “On the Sunny Side of the Street” or “Tangerine,” responding to their familiar strains, now blended with new elements and harmonies.  The twins’ respect for their sources was also manifest by slides indicating the song, composer, and original arranger.

Will and Pete alternated leads—using seven different instruments—and shared solos with gifted bandmates.  Vince Giordano is a headliner, and surely the only musician who comes to gigs bringing a standing bass, tuba and bass sax (think of his fun looking for a cab!).  He also sung on occasion, echoing the era when musicians sang (Tex Beneke singing Kalmazoo with Glenn Miller’s band comes to mind).  This show would have benefitted by the addition of a true vocalist, but Giordano’s contributions were fine, and, since the twins rented Symphony Space—going at financial risk themselves—one shouldn’t fault them for investing in musicians rather than singers.

The other members of the septet included Joe Boga, playing a hot trumpet.  Before electric guitars started to dominate pop music in the ‘60’s, trumpet was a featured instrument in many big bands; adding the instrument to The Andersons’ traditional lineup made an enormous difference.  The sweet sounds of a clarinet’s glissades were challenged in the past to replicate the bite of brass, and Boga delivered, particularly when he reached for the high notes.  (Surprisingly, on “Well Git It,” the original Sy Oliver arrangement called for two trumpets during the ride-out, but Pete’s arrangement paired trumpet with trombone, rather than with the higher notes of a clarinet.)

Trombone was played by Robert Edwards; Jeb Patton was on piano; and the drummer was Alex Raderman.  All three sparkled, and the twins provided plenty of opportunity to showcase each.

The Andersons have traditionally offered accessible jazz, driven by melodies of the ‘30’s and ‘40’s, and their mixed-media presentations are infectious (even for the vaccinated!).  Those signature insights elevate a show that’s damn good without them, but come on, who knew “Marie” was written by Irving Berlin?!

The twins will be back at Symphony Space to perform A Jazzy Christmas, with two shows on December 18th, featuring the singer Molly Ryan, and Chuck Redd, on drums and vibraphone.  I can’t wait to see how they’ll treat Santa and his elves. www.symphonyspace.org. https://peterandwillanderson.com/shows/