The Wolves at McCarter Theater 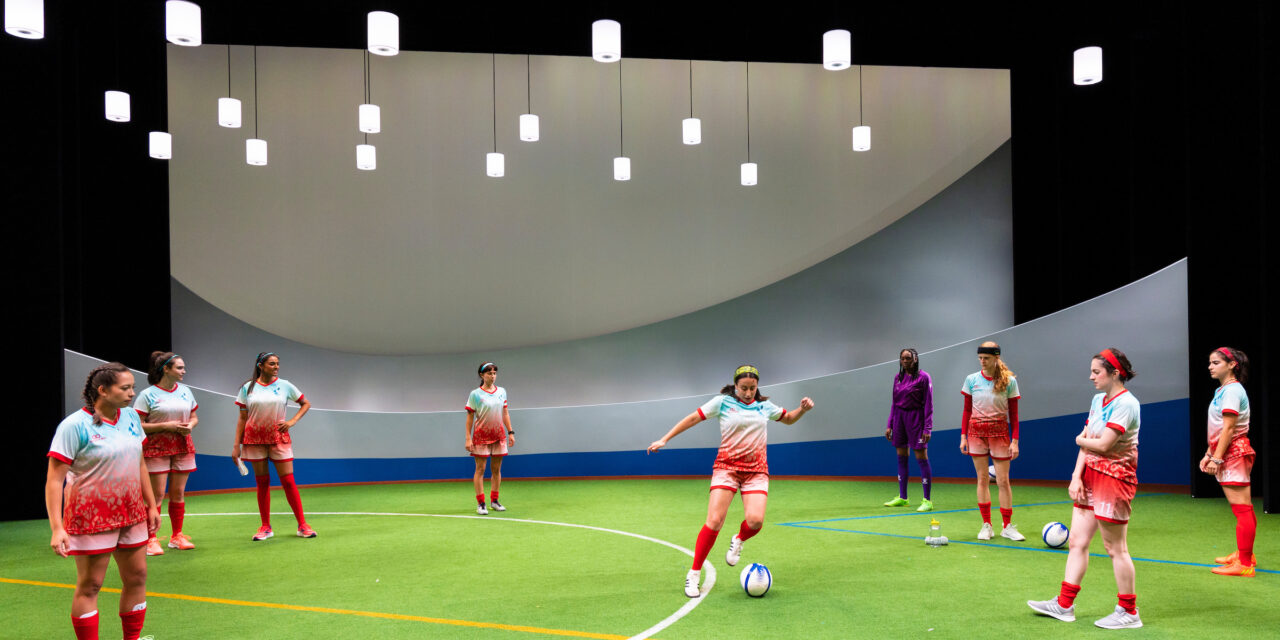 The Wolves is a high school indoors girls’ soccer team and the play reveals itself gently in a series of scenes before games while the players stretch and warm up. Never has the camaraderie, insular politics, shorthand communication of a team been so deftly presented on stage.  Playwright Sarah DeLappe dexterously crafts memorable characters – largely without names – through quick flashes of crosstalk.

There is no set-up or “inciting incident”, nor is there a particularly focused central question. The players, (all the characters are recognized by their jersey numbers or uniform color and not names) talk in overlapping conversations about everything from feminine products to fate of 90-year-old former Khmer Rouge criminal who committed horrible acts of genocide in the Vietnam War and was recently arrested. DeLappe’s dialogue is sharp, authentic, and kinetic.  One quickly gets caught up in the relationships and situations presented. Of course, it helps that the play is smashingly well acted by an incredible ensemble and directed brilliantly by Sarah Rasmussen.

Over the course of the season, tension and jocularity rises.  As the players stretch, they chat, gossip, plan for their future games/weekend plans in the simultaneously carefree and devastating way only adolescent girls can. The battle between significant and seemingly inconsequential minutiae swirls dazzlingly in the rarefied air of an all-female cast of adolescents navigating their place in the team, with one another, and the larger world.  Though they know each other and have built relationships over the course of their seasons – indoor, travel and other teams, there belies an air of projected confidence, protectiveness for one another, insecurity, and intra-team competitiveness especially with the risk of injury and a new player’s arrival.

The power of “The Wolves” comes from its deceptive simplicity. DeLappe, the actors, and Rasmussen emotionally involve the audience slowly allowing us to eavesdrop on these players.  Then in a brilliant turn, an off-stage incident occurs.  This makes it almost subversive. Its profoundness creeps up on you, and you are left raw, just like the members of the soccer team whose lives are tested and turned upside down one fateful winter day.

The cast is uniformly excellent, offering a plethora of solid, gripping performances as they balance the complicated social dynamics of a teen group of girls.  Everyone gets moments to stand out.  The show offers sly sparks from Isabel Pask; raging anxiety and sudden confidence from Renea Brown; Mikey Gray’s perky, determined captain; Maria Habeeb and Katie Griffith’s deceptively knowing but graceful innocence.  And Jasmine Sharma and Maggie Thompson’s relationship is particularly nuanced and realistic. Owen Laheen’s neediness and overachieving perfectionist is pitch perfect.  There is a grace to the balance of the players’ relationships that is brilliant and elegant.  The presence of an adult illustrates how fragile the team ecosystem is which is a subtle magnificent choice by DeLappe.

There’s much to enjoy and think about in “The Wolves” at McCarter Theater in Princeton, New Jersey. DeLappe’s writing is skillfully detailed and handily organic. No exposition feels forced, due to the honesty of the portrayal by the actors and the balance with the writing.  The grace and depth of this production is admirable. Necessary new information is revealed in cunning, suspenseful ways.  Rasmussen’s direction offers a quick clear sense of the types of people all nine girls are, and the roles they all play within the group. Throughout the course of the story the girls deal with injuries, anxiety about the future, sexuality, and their fragile social order. For every dynamic played out to fruition, another compelling thread lurks.  The production’s commitment to painting these girls as fully realized, complex human beings, an impressive feat and makes for wholly engaging, thoughtful entertainment.