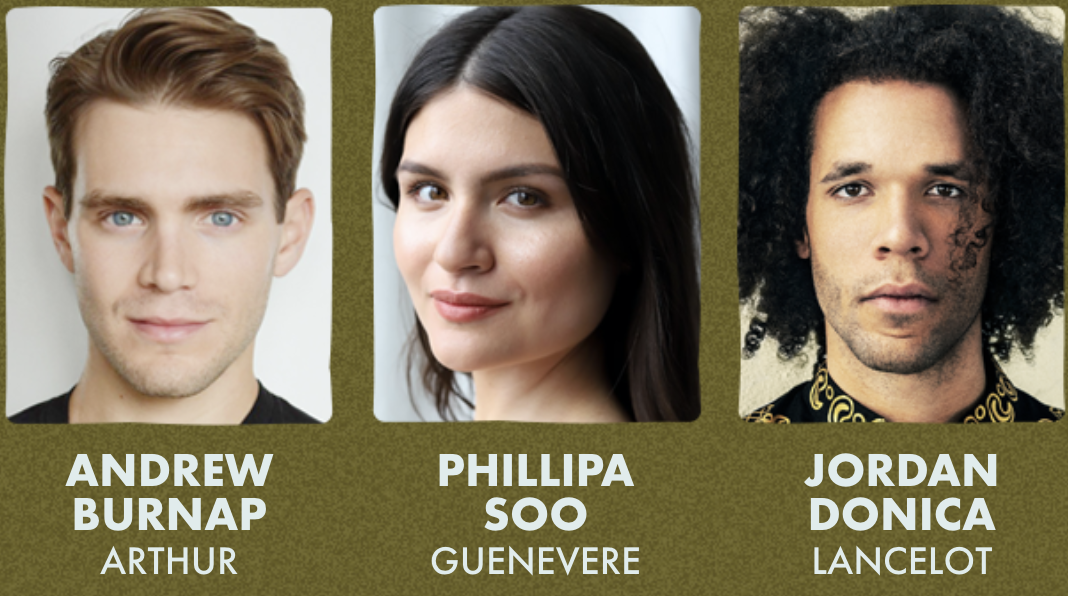 Lincoln Center Theater (under the direction of André Bishop) has announced that Dakin Matthews (as Merlyn/Pellinore), Taylor Trensch (as Mordred), Marilee Talkington (as Morgan Le Fey), Anthony Michael Lopez (as Sir Dinadan), Fergie Philippe (as Sir Sagramore), and Danny Wolohan (as Sir Lionel) will join Andrew Burnap (as Arthur), Phillipa Soo (as Guenevere), and Jordan Donica (as Lancelot Du Lac) in its new production of Lerner & Loewe’s CAMELOT, a fresh take on the classic tale.Featuring a book by Academy and Emmy Award winning writer Aaron Sorkin, based on the original book by Alan Jay Lerner, and direction by Tony Award winner Bartlett Sher, Lerner & Loewe’s CAMELOT is scheduled to begin performances on Thursday, March 9, 2023, and open on Thursday, April 13, 2023, at the Vivian Beaumont Theater (150 West 65 Street).

TADA! YOUTH THEATER PRESENTS: Princess Phooey. February 10, 2023 through February 26, 2023. At TADA! Youth Theater, 15 West 28, 2d Fl. NYC Princess Phooey, an original musical, is not your typical fairy tale, and Phooey is not your typical princess. She doesn’t want to curtsy, smile, or be rescued by a Prince (although he tries), because she can rescue herself, if need be, and she would rather run around with the chambermaids and the stable boys. TICKETS: Please visit TADATHEATER.COM for more information.

Songbook Sundays, created and hosted by Deborah Grace Winer celebrating the American Songbook will continue at Jazz at Lincoln Center’s Dizzy’s with BEWITCHED, BOTHERED AND RODGERS AND HART on Sunday, February 5th at 5 PM and 7:30 PM at Dizzy’s Club. Bewitched, Bothered and Rodgers and Hart kicks off February and a new year of Jazz at Lincoln Center’s American Songbook shows at Dizzy’s Club.  This Songbook Sundays heats up the winter chill, with the sexy wit and jazzy romance of Richard Rodgers and Larry Hart’s partnership and songs sparkling, smart and sublime.  Starring Tony award nominated vocalists Emily Skinner and Kenita Miller, with young Broadway rising star Jarvis  B. Manning, Jr. with Ted Rosenthal musical director leading a band of jazz all-stars, including Houston Person on tenor sax. Hosted and curated by leading American Songbook expert Deborah Grace Winer, the set highlights Rodgers and Hart’s greatest—like My Romance, Manhattan, I Wish I Were in Love Again, Where or When, Bewitched and more. Jazz.org/dizzys

Broadway Backwards, the annual Broadway extravaganza celebrating the LGBTQ+ community through the great songs of musical theater, returns to Broadway’s New Amsterdam Theatre on Monday, March 13, 2023. The beloved evening, created and directed by Robert Bartley,  and its star-studded cast will embrace love and self-expression in true Broadway fashion.

BIRDLAND JAZZ CLUB will present an exclusive six-show engagement from Rickie Lee Jones to preview her upcoming album Pieces of Treasure from Thursday, April 6 to Saturday, April 8 with shows at 7:00 PM and 9:30 PM. Rickie Lee will be backed by Rob Mounsey on piano, guitarist Russell Malone, bassist Paul Nowinski and drummer Mark McLean. The music charge ranges from to $50-$100. Tickets to the concerts are available HERE. A livestream option is for Friday, April 7 at 7:00 PM is available HERE for $30. Birdland is located at 315 West 44th Street in New York.