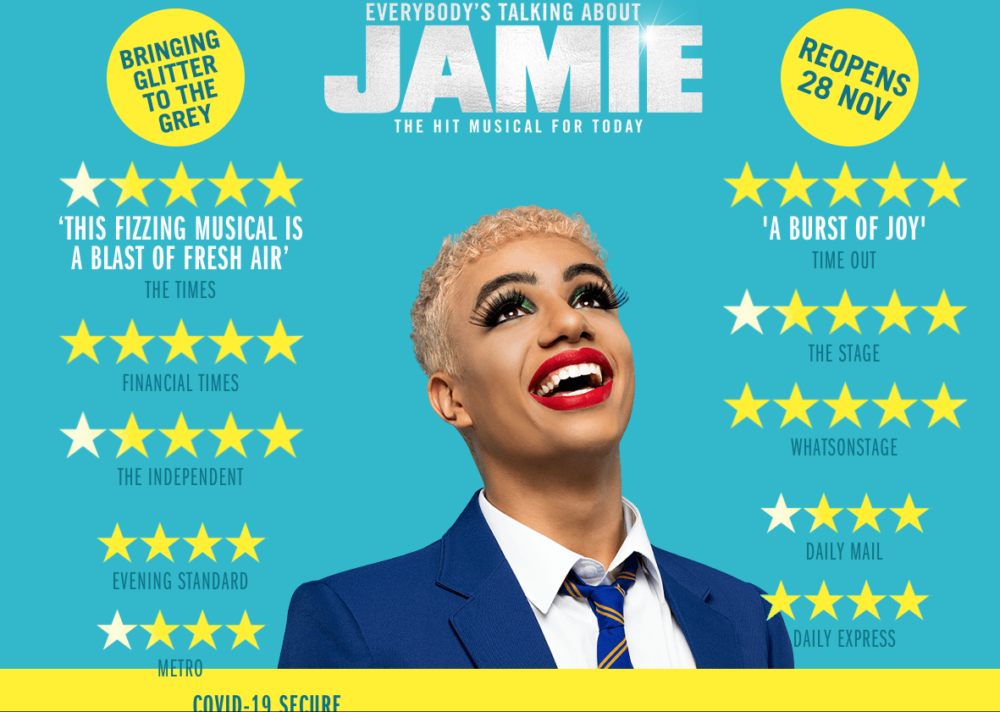 Across the Pond In London, the hit West End musical Everybody’s Talking About Jamie is set to make its West End return to the Apollo Theatre for a six-month run beginning November 28. According to the creative team, changes have been made to the show’s staging to ‘reflect a new Covid world’ including masks for ensemble members playing school kids.

The cast will include Noah Thomas returning in the title role, along with Melissa Jacques, Phil Nichol, Sejal Keshwala, Hiba Elchikhe, and Gillian Ford.

Songs are by lead singer-songwriter of The Feeling, Dan Gillespie Sells, and book and lyrics by writer Tom MacRae, this funny, fabulous, feel-good, musical sensation has been wowing audiences and critics alike.

Supported by his brilliant loving mum and surrounded by his friends, Jamie overcomes prejudice, beats the bullies and steps out of the darkness, into the spotlight. Tickets for the limited return are on sale here: https://www.everybodystalkingaboutjamie.co.uk/

The film adaptation of Everybody’s Talking About Jamie comes to theaters February 26.

And in Spain . . .Tony nominee Antonio Banderas will take on Stephen Sondheim and George Furth’s Company. According to El País, he will star as Bobby in a Spanish-language production that he will also direct in fall of 2021. The show will be staged at Banderas’ Teatro del Soho Caixabank in Málaga, Spain. Depending upon coronavirus safety guidelines, the intention is for the show to be presented in the round and potentially head to Madrid following the Málaga run. Exact dates and casting will be announced later.

READING: “Dorothy Lyman Play Gets Reading … Online” by Lauren Yarger for BroadwayWorld Connecticut – “The Keys, a new play by Dorothy Lyman … will have two readings on Zoom, produced by Pat Flicker Addiss and Lauren Yarger.” http://bway.ly/aw1kb1

EVENTS:
“Danai Gurira, Stephen Daldry, and Lynn Nottage Will Present Act Out: Vote2020” by Playbill’s Andrew Gans – “The hour-long video featuring songs and short monologues aims to get out the vote.” http://bway.ly/glyrpc

“Adrienne Warren, Brandon Victor Dixon, Jomama Jones and More to Take Part in Public Forum: We the People” by BroadwayWorld – ” … will premiere on November 2 at 8:00PM ET on The Public Theater’s website.” http://bway.ly/3j4vfe

VULTURE: “Can We Imagine Something Better?’ David Byrne and Heidi Schreck discuss the links between their filmed Broadway shows.” by Vulture’s Jackson McHenry – “Watch American Utopia and What the Constitution Means to Me back-to-back, and you can see a conversation between them start to develop. … Byrne and Schreck are fans of each other’s work, and they agreed to have a conversation about the links between their Broadway productions … . They also discussed playing versions of themselves onstage, how they thought about their whiteness while making pieces about America, and what they might change once they can perform live again.” http://bway.ly/twjigm