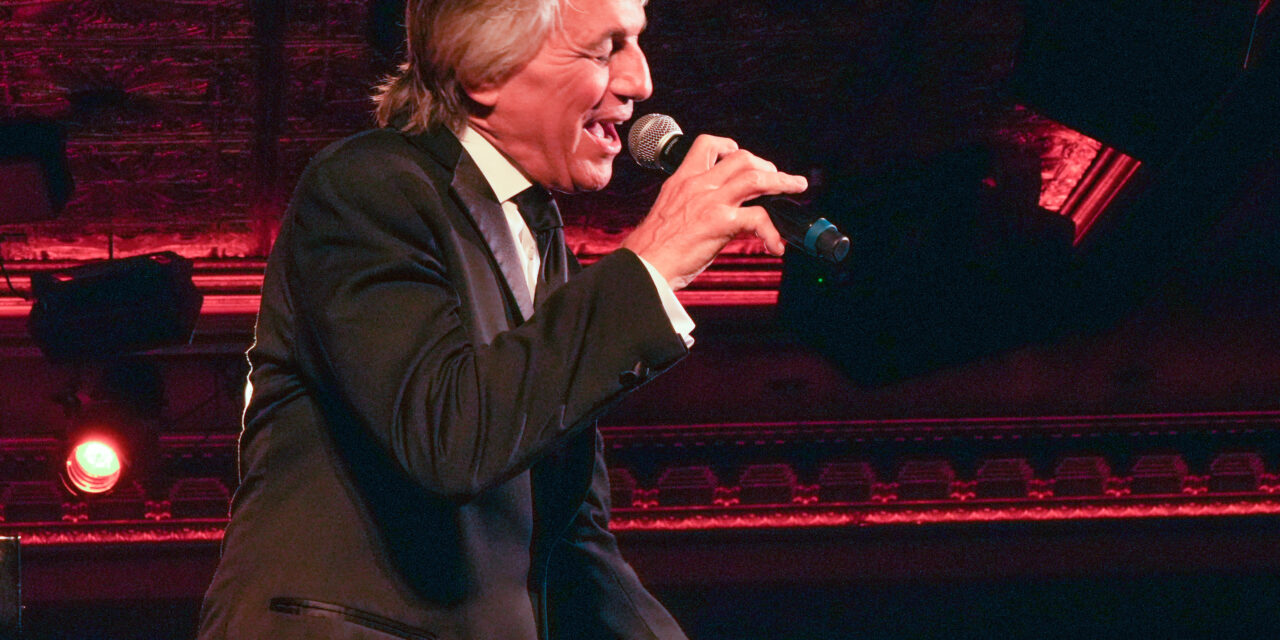 What hasn’t Tony Danza done? He’s been a prize fighter; an actor on stage, film and television; a high school teacher; a talk show host; an author; a recording artist; and a song and dance man with his ongoing cabaret evening, Standards & Stories. The latest edition of this delightful show is now at 54 Below. What’s evident about all the iterations of Danza is that he’s an entertainer full of charm, charisma and a discernible love for  performing and pleasing an audience. Plus, at his core, he’s an  exceptionally skilled storyteller.

Let’s consider the false start to the show. Just as the lights in the club were about to go down, guitarist Dave Shoup realized he’d forgotten his music. As Shoup exited for the long run up to the 10th floor green room and back, Danza knew he’d have to step in and spontaneously fill the space of time. Those off-script moments were a treat—proof positive of the star’s abilities as a natural entertainer of wit and authenticity. He’s a WYSIWYG kind of guy, in computer parlance; that is: “what you see is what you get.” The personal nice guy seamlessly transitions from backstage to center stage. The result is that it’s easy to believe he’s singing just for you in your own living room. That’s a commanding ability—to so connect with an audience—that not all entertainers possess.

His captivating whirlwind of a show began with Bobby Darin’s “As Long As I’m Singing,” including some jazz scat. Danza has a pleasing baritone with a charming hint of a growl now and again. As Standards & Stories unspools, it becomes apparent that versatility is not only part of the show, but inherent in his nature—born of curiosity, a desire to learn and grow and experience. This kid from humble beginnings in East New York, Brooklyn has traveled far from those days, which he acknowledges with respect, especially relating stories about his mother, an original Frank Sinatra Bobby-Soxer. Danza credits her love of Sinatra for his musical roots. His homage to Old Blue Eyes included several songs identified with the crooner, such as “It Was a Very Good Year” (Ervin Drake) and a little-known “Drinking Again” (Doris Tauber, Johnny Mercer). But the most delicious part of the story is Mom’s ego-leveling mantra to her TV star son: “When you introduce your mother to Frank Sinatra, then you’re a star!” It turns out Sinatra guest-starred on Who’s The Boss? and Danza was able to make that wish come true.

At the root of this heartwarming and charming story is another facet of the Danza personality—a deep sense of respect. This attribute comes through in many ways in Standards & Stories, and is very apparent in giving credit to those responsible for the material he sings—the composers and lyricists. He even, with “How Little We Know” (Hoagy Carmichael, Johnny Mercer), made sure to credit the arranger of his version, the late and legendary music director, John Oddo. Danza told great stories about meeting lyricist, songwriter, Sammy Cahn, while just starting out, and becoming close friends with him. He offered “Please Be Kind“ (Saul Chaplin, Sammy Cahn) and “(It Will Have to Do) Until the Real Thing Comes Along” (Saul Chaplin, L. E. Freeman, Sammy Cahn) in honor of his “second father.”

Another moving part of the show is Danza’s tap dancing. He explains the origin of this love in the show business world, but more than that it’s easy to see where the genesis lies: Danza was an athlete. He wrestled in high school and then there was the prize fighting, where footwork is like dancing and counts for a lot in winning rounds. He tapped to “How About You?” (Burton Lane, Ralph Freed) and also in a section of the show, displayed his talent on the ukulele (he also plays piano and trumpet). His narrative on how standards can be adapted and arranged to the instrument included Buddy Johnson’s blues ballad, “Since I Fell for You,” and the Jerry Lieber and Mike Stoller rock and roll hit, “Love Potion No. 9.” That presentation led to musings about the enduring nature of American standards versus rap, and the question, “what are young people today going to hum?” A comic “Italian rap” then followed.

Humor was a generous part of evening. Danza’s delivery of two numbers from the 2015 Broadway musical (in which he appeared) Honeymoon in Vegas—“Betsy” and “Out of the Sun” (both by Jason Robert Brown)—certified Danza as a master of timing in comedy and beyond. Tony Danza’s Standards & Stories has been playing around the country for about 20 years. Its ongoing success, aside from the charisma and talent of Danza himself, is also owed to the fact that the well of stories and songs from which to draw is deep enough to keep the show fresh and new, as required.

In 2002, Danza released his debut album of standards, “The House I Live In.” His band has been together pretty much since. In addition to guitarist Shoup, who also provided backup vocals, as did bassist John Arbo, there’s drummer Ed Caccavale and the “new kid on the block,” music director-pianist Joe Davidian, who delivered a terrific solo on “Angel Eyes” (Matt Dennis, Earl Brent). Davidian was a particular joy to watch as he led the band through the show with energy and engagement. Not only were these cats totally in the groove but, like Danza, were having a really good time making music and song happen—a capacity that adds to the up-energy of a room and to creating a good-time feeling for those on and off the stage.