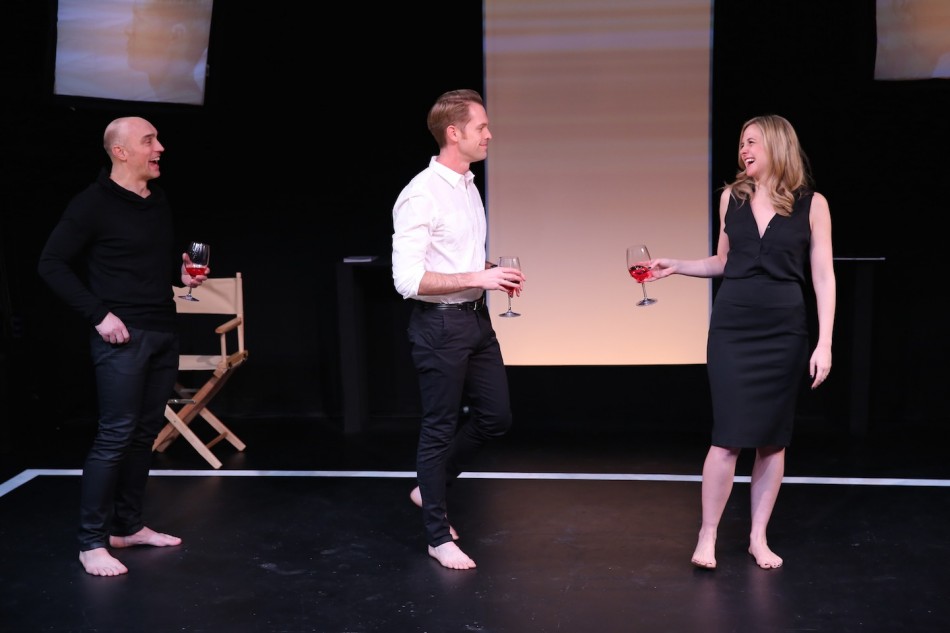 Brendan Gall’s Wide Awake Hearts, directed by Stefan Dzeparoski, is a sardonic send-up of actors, writers and filmmakers caught up in the drama of observing their own lives instead of enjoying them. In his thought-provoking, ironically-themed play, Gall reveals the dynamic relationships between a married film writer/producer and actress wife, and actor friend and partner editor as each of them slowly unravels like unspooling film.

Through vignettes of fast-paced, irony-tinged dialogue, intermingled with interior monologue solos, we realize that these individuals, writer/producer-A (a strong performance by Ben Cole), his wife-B (the lovely Clea Alsip), actor-C (a fine portrayal by Tony Naumovski), and editor-D (Maren Bush is spot on), have allowed their personal authenticity and inner reality to shapeshift. They have been influenced by their roles as players in the film industry’s dream factory. The shapeshift has been induced by writer/producer A, who has written a film about a couple who is in love; to complicate matters, he has cast his wife (B) and his friend (C), whom he suspects loves and is having an illicit sexual affair with her behind his back. 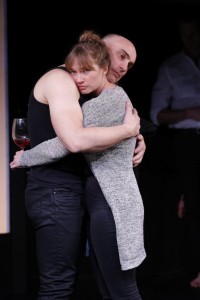 We understand we are in for a wild ride when A and B invite C for dinner to discuss the film, his role in it cast against B, and their old times together. A’s tone is edgy as he shotguns humorous, insulting quips at C, then apologizes that the wine has made him drunk and a “bit of a vampire.” Character B picks up the metaphor and suggests that dinner will be “bloody,” A suggests he “loves” blood, C quips he is “hungry.”

From the “vampire” metaphor, we pick up the unconscious intimations beneath their lightheartedness. A, B and C are ready for a devouring adventure and most probably they will be emotionally snacking on each other’s being as a way to get through their own inner pain. Character A continues the metaphor later in the play when (in a revelatory monologue), he suggests that the film industry encourages those employed by it to devour themselves from the inside out.
With these few lines, Gall has foreshadowed the plot arc and has indicated that the characters are unsettled and will “have at each other” when they are together. Most likely nothing in their working relationships on screen and off will be easy and there will be a bleed between reality and the roles they portray on film.

The scenes quickly move from one to the next and we are unsure whether we are watching B and C kissing passionately on film or in real life. Gall heightens the theme that life’s drama is the “stuff” that dreams are made of and these are the “stuff” that the “dream factory” makes stories from in an ironic reversal. As the play progresses, Gall reveals that the fictional film that A has written has hidden truths in it: the lines between reality, truth and illusion are blurred. This fusion of truth and illusion frustrates A and his rage spills over in his relationships with B and C as he accuses them of having an affair which is materially untrue, but spiritually accurate on C’s part.

However, it is D-the film editor and C’s “partner-in-flux” who grounds the other characters in reality, duplicating for their benefit in life, her role as a film editor who forms and shapes the development arc of a film. She questions A’s intentions in writing a film which would cast B and C together as a love match; she confronts C about his unacted upon desire for B, and she asks A why he fired another editor and chose her to edit, knowing her relationship with C. Finally, she clarifies to B that according to science, “love is just a dead memory.” Clearly, D’s heart is “awakening” though she, too, is caught up in the complications of jealousy and the suggestion of illicit relationships when she returns A’s sexual advances until he becomes violent. Indeed, in love how much do we fool ourselves, though believing ourselves to be “awake?”

The director makes fine use of limited stage space and the actors carve out the appropriate areas to suggest a living room, the film set, a dining area, etc. Helped by screen projections, each actor is “given their close-up.” However, the projections and the monologues only reveal in part who these individuals are, a clever calculation by the director and playwright. We understand more as we watch how A, B, C and D interact with each other both in reality and as they shoot their film scenes. However, the starkest theme in Gall’s work is that our own lives and loves are a film loop that repeats over and over again. And as in the case of these characters, it may be spinning film from which we may never awaken or extract ourselves.

This intriguing production of Wide Awake Hearts will be at 59E59 Theaters until February 7. www.59e59.org 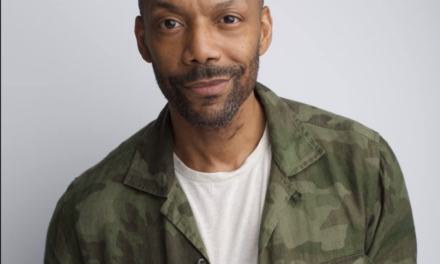 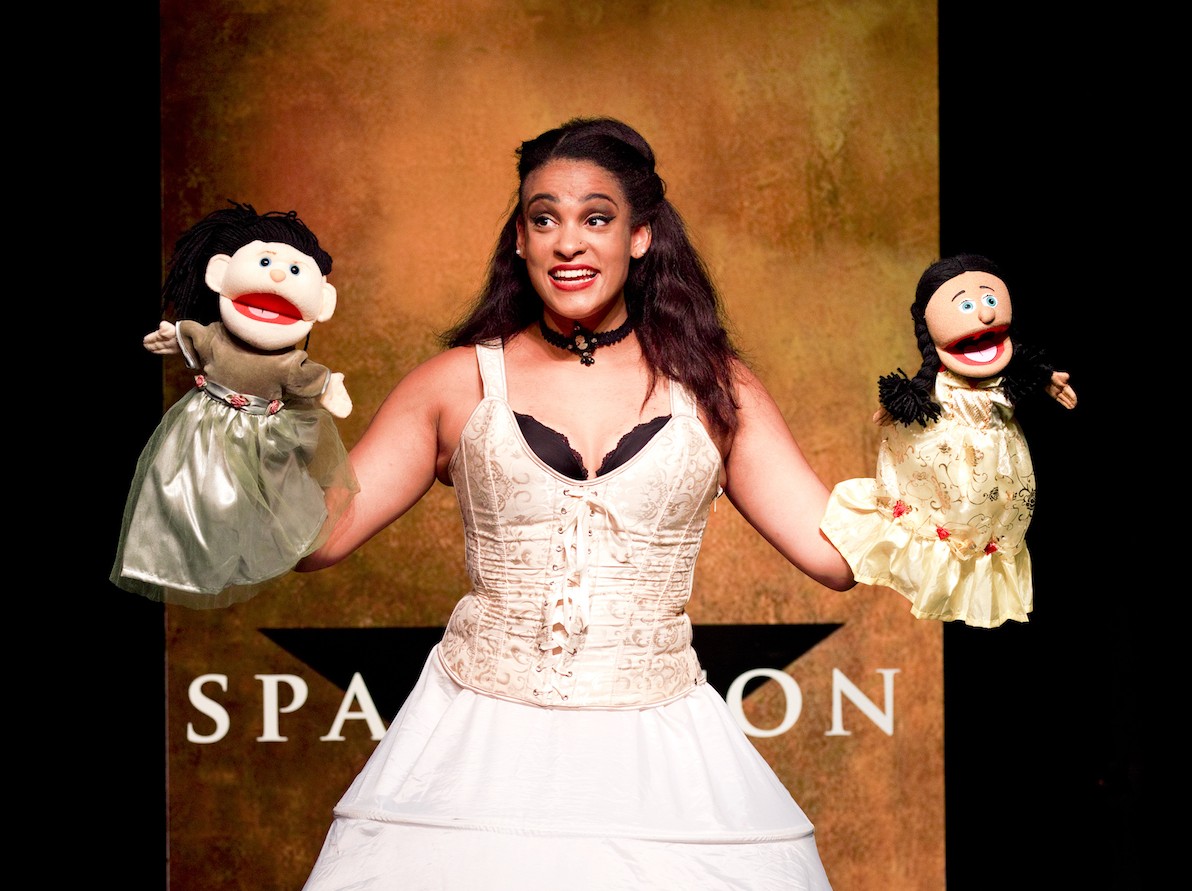 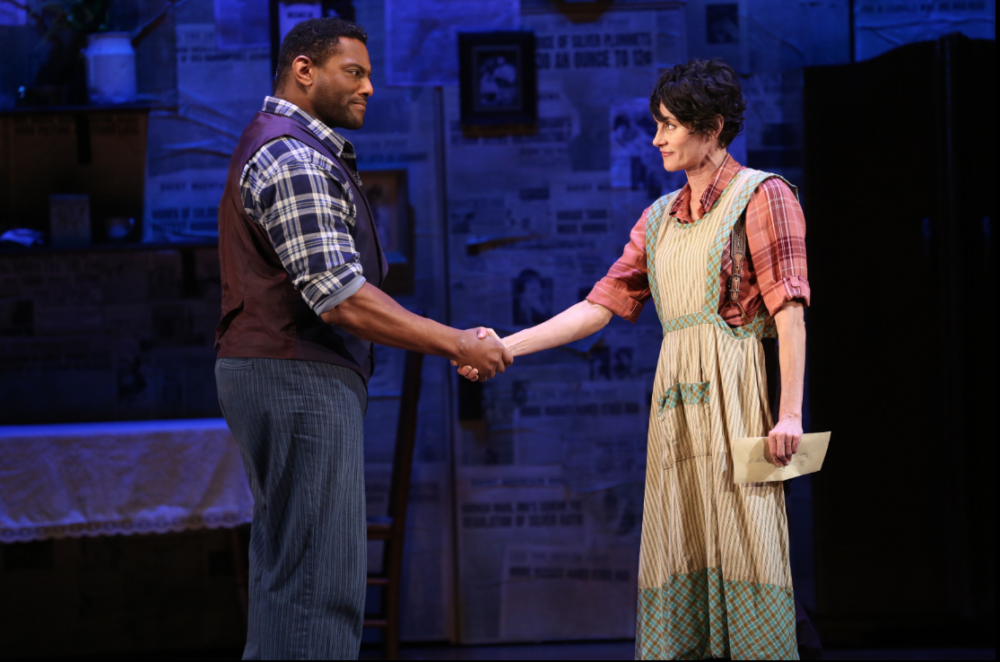